BLM showing cracks in the wall. 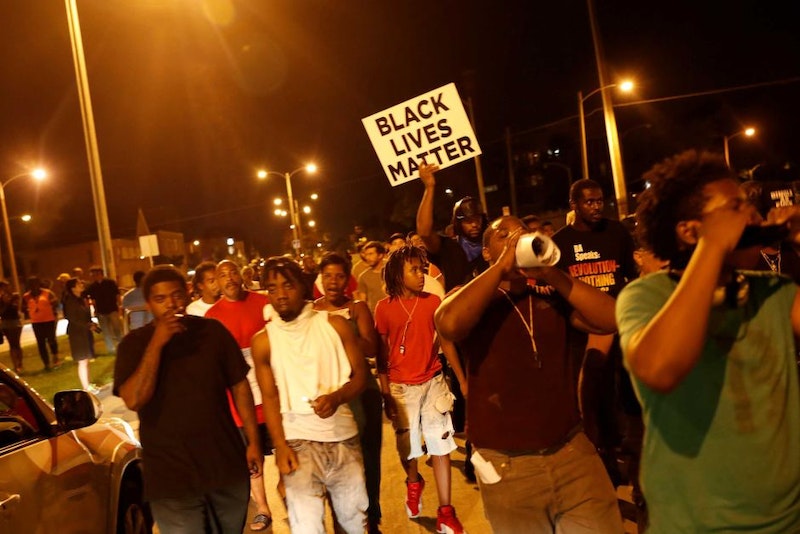 “Black lives matter is the worst slogan I've ever heard,” comedian Dave Chappelle told the audience at his recent show at The Cutting Room in New York City. That's a common refrain among many conservatives, but not something you hear from black celebrities. Chappelle's a thoughtful type who’ll surprise you though, which is part of his appeal. The slogan does appear, in retrospect, ill-advised. It's too easy for opponents to distort.

Chappelle’s not the only expected ally who’s turned away from BLM lately. Leftist “guerilla journalist” Tim Pool, known for his coverage of radical street protests, recently released a video explaining why he was abandoning his reporting (something he'd never done before) of the recent Milwaukee riots (or “protests,” as BLM calls them) after he saw blacks specifically targeting whites, and heard screams of “Fuck white people!” and “White people suck!” Pool decided to leave after an 18-year-old white man got shot in the neck, an event that ended up getting buried in national media coverage.

Despite the generous media coverage, it’s no longer possible to entertain the fiction that BLM’s a peaceful protest against police violence against black people. Not after the mayhem and violence in Milwaukee, and all the burning and looting preceding it in other cities. BLM has now morphed into an anti-cop movement that openly chants for cops to die and, as on display in Milwaukee, more and more an anti-white movement.

The “hands up, don't shoot chant” chant and Twitter hashtag so central to BLM’s rise to prominence during the time of turmoil in Ferguson, Missouri two summers ago turned out to be based on a lie, as the supposedly innocent martyr, Michael Brown, was actually trying to grab a cop’s gun when the cop shot him. BLM didn't see the dangers in basing a movement on a lie, choosing instead to champion the cause of any armed black man with a lengthy rap sheet who gets shot by a cop, regardless of the circumstances. Black Lives Matter is addicted to its power to induce mayhem now.

Black Lives Matters leadership refuses to apply any brakes to the inevitable acting out on rash impulses that follows police shootings. It's like a football coach with a bunch of renegades on his team who says, “Go for it, fellas, do whatever it takes.” While the results may be spectacular in the short run, and the coach will be popular with the team, it's not a sustainable winning concept. That requires discipline, which BLM hasn't an ounce of.

Looting hair extensions from a black-owned business, or burning down a gas station that’s minority-owned, helps no one. It’s not taking action against the oppressor. Responsible leaders would discourage it, as it's counterproductive and allows your opponents to attack you as thugs, but that's not how BLM operates.

DeRay McKesson, the most recognizable BLM leader—and one who enjoys the status of a presidential invite to the White House—doesn’t believe the police are anything more than an occupying army, so he encourages burning and looting as legitimate responses, even though in the morning all that's left to show for the effort is fewer businesses to provide services and even fewer who’d consider opening one in the neighborhood. Also, the police are never going away.

Black Lives Matter leaders never ask anything from their people. Giving them carte blanche to act out their worst impulses is much easier. They've chosen the wrong name and the wrong tactics, and they act as if there's been no progress since the civil rights era in the 1960s. By constantly referencing the “virulent anti-black racism” that “permeates our society,” they effectively erase all the civil rights advances of the past five decades to fuel the utopian vision they promote.

Now that Chappelle and Pool are calling BLM out, the writing’s on the wall. Others are sure to follow. An inchoate social movement by a minority group based on pure hatred can't succeed in the U.S., because you need to build coalitions to effect real change. That requires strong leadership, and BLM doesn't have that.

Black Lives Matter’s hard-left position means they want to burn everything down, sometimes literally, and start over again. Instead of working at channeling rage they encourage it anarchically. Liberals and the media will continue to help prop them up, but people are starting to see who they really are now, and that won't work out too well for them.