Allowing for the state persecution of anti-Islamist Tommy Robinson. 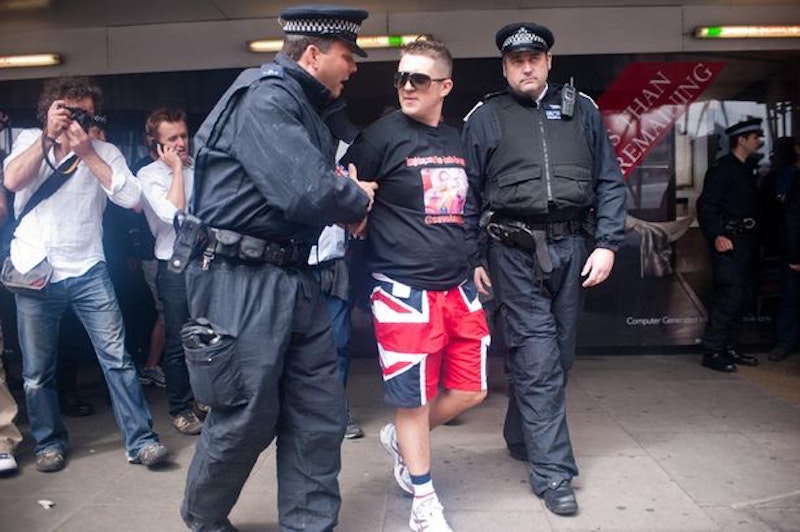 A man walks into a restaurant with his three children to watch a football game on TV, and soon 10-15 police officers show up and tell him to leave. Even though the establishment's security people intervene to say that they want the customer there, the police persist. Not only do they kick him out, they insist he leave town immediately, and escort him to the train station as his children weep in terror and confusion. They’ve no idea what’s happening to them.

If you're an American, you probably find it hard to envision such a scenario. It won't happen here because we still enjoy constitutional protections, but it did just happen in what’s considered one of the most advanced nations in the world, and a bastion of democracy—the U.K.

The protagonist of this authoritarian drama was Tommy Robinson, former leader of the English Defense League, and outspoken anti-Islamist activist who’s become a pariah among the media and college-educated classes of the nation, who perceive him as just a racist yob and football hooligan. The city is Cambridge, which he's now barred from, because the police, who invoked the ominous sounding “section 35 dispersal notice,” have declared a guy with three young kids watching sports in a pub as a threat to the public order.

The U.K. government guarantees its citizens nothing like the level of civil liberties we’re used to in the U.S., as illustrated by its treatment of Robinson over the years. The Cambridge incident, in fact, was rather mild. When he was convicted of mortgage fraud, on what he claims were trumped-up charges by the government, the white-collar offense landed him in a prison housing the most dangerous Muslim terrorists. Inside, Robinson was a big trophy for any Muslim prisoner wanting to make a name. Two weeks from his release date, the guards locked him in a room with several Muslims, including one who was serving a 28-year term for murder. They beat him badly, knocking out many teeth, but Robinson survived, perhaps to the chagrin of British authorities.

Governments in democracies that get away with this always explain it's being done for the people’s own safety. There are so many security cameras in public places in the U.K. that one might think the authorities took Orwell’s 1984 as an instruction manual. The government's monitoring individual social media accounts too. If you tweet something deemed unacceptable, the police may soon knock on your door. The Glasgow police, sounding drunk on unchecked state power, tweeted this out as a friendly reminder: “Think before you post or you may receive a visit from us this weekend.” They urged city residents to be “kind” on Twitter.

The Brits are appalled at America’s gun problem. They tightly regulate firearms, and gun homicides account for less than three percent of all homicides now. There's undoubtedly something broken here, and the number of shootings is appalling, but something’s amiss in the U.K. too. I wonder why their people have become so docile.

Could it be that the price we in the U.S. pay for not having to submit in this way is all of our gun deaths? The next question would then be, “Is that price worth it?” It's certainly a steep price, but perhaps putting it starkly like this is the best way to frame the debate on the issue.

Tommy Robinson's been called the most hated man in the U.K. for his outspoken anti-Islam rhetoric, and now it appears he's become the most feared person as well—feared by an all-powerful government that appears bent on destroying him and seeing that he's killed. The police in Cambridge didn't seem concerned that they could be perceived of denying the most basic liberty any citizen should possess. They appeared comfortable they'd be able to have their way. If it happened here in the U.S., I believe bystanders would intervene. We don't just trust our police to do the right thing.