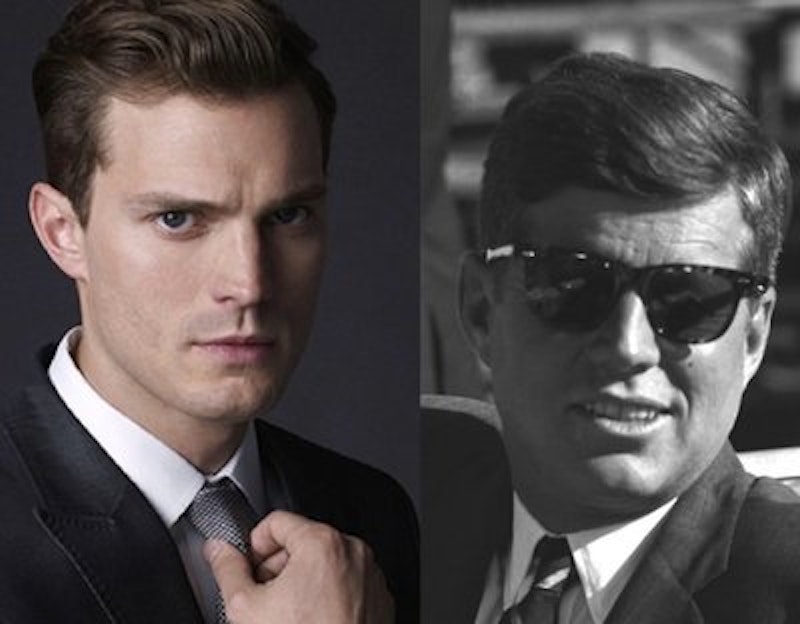 Born 100 years ago today, John F. Kennedy has been used since before his death as a screen onto which Americans project their fantasies, inspiring or dark, political and sexual. As so often with fantasies, these are fantastic. “JFK” is the first or second name that comes up when people discuss the mysterious supernatural political substance known as “charisma.” And he’s the symbol of an optimistic, more innocent, American-dreamier America, which is an unlikely role for the man, taking him whole.

Evidently, America retained its innocence through the practice of slavery, the Indian wars, the bloodbath of 1860-'64, robber barons and wars of conquest, lynchings and race riots, the development and detonation of atomic weapons, McCarthyism, and cold-war espionage. Our innocence was impervious and unchanging, but we mislaid it in Dallas on November 22, 1963. Of course, Jack Kennedy himself didn't have a lot of innocence left to lose in any dimension by then.

Also in 1963, James Baldwin said of American white people, "It is not permissible that the authors of devastation should also be innocent. It is the innocence which constitutes the crime.” Or, consciousness of one's innocence is of the essence of certain kinds of evil. Some forms of innocence one does well to lose.

A lot of the history written in the vicinity of Kennedy has a propaganda flavor; the genre is what we might call “desperate hagiography.” I don't think he had a lot of direct accomplishments, though he spoke inspiring words, by and large written for him by others. His true greatness, according to the literature, consists in what he might’ve done or would’ve done or almost did, the fact that he wasn't fully responsible for the bad decisions he made, and above all in the way he looked. So, the utterly incompetent invasion of Cuba was a plan he inherited. He would’ve stopped escalating the conflict in Vietnam, probably, or he might possibly have wound down the CIA assassination program. He would’ve put forward a big Civil Rights bill, maybe. People write the biography of, or actually seem to remember, the man they wish John Fitzgerald Kennedy was.

He was full of wit and wisdom, by and large Ted Sorenson's, who wrote Kennedy's absurd Pulitzer winner Profiles in Courage. He had the sexual morals of an alley cat and terrible addiction problems. He had that Rushmore-ready mug but also a movie-star glamorous mystery; he looked and dressed like a Rock Hudson or William Holden. He had a lovely, long-suffering wife: cutest of all times until Melania. Of all the presidents, he probably achieved the biggest appearance/reality split: the surface was perfect.

Thinkers have long contemplated the origin and usefulness of political authority. Thomas Hobbes argued that it derives from a rational choice of security over liberty, and that coercive authority is necessary for any sort of collective human action. Immanuel Kant urged that we acknowledge political authority in order to preserve our own dignity as the lawgivers of ourselves, or something along those lines.

But in Hobbes, in Kant, and in the cult of Kennedy, acknowledgment of political authority has an element of the ecstatic as well as the rational, and of course people often follow political authority unto their own destruction, into wars and genocides, or merely into economic misery. Human history, it strikes me, is incomprehensible without the thesis that people often want to be subordinated.

The history of political authority is, in short, Fifty Shades of Grey.

In some ways, this desire is indiscriminate, and people feel all right knowing there is someone in charge somewhere. But it can suddenly crystallize around a particularly sexy someone: that's one thing we mean by “charisma,” which we do treat as an inexplicable super-power. There is a dark charisma, like Rasputin's or Fu Manchu's or perhaps Hitler's: they can supposedly mesmerize you with the beams of pure evil coming from their eyes and their diabolical messaging. That too might have a sexual element. But then there's the charisma of light and beauty, the Greek-god charisma of a Kennedy or a studly movie star.

And then there’s the labyrinth of Kennedy's assassination: thousands of people have been obsessed with investigating it and honestly, we've still got no idea. You get to blame it on whatever dark forces you prefer, from the CIA to Fidel, the mob to the Pope. Usually, the brilliant solution is that everyone was amorphously involved, even you and me: he died for our sins. Ever since then, things have been going downhill: remember when “we” still had our ideals = our delusions? Well no, I don't remember that, actually.

Michel Foucault observed, "Power comes from the bottom." It's rather a rich remark, and he was certainly referring to the “bottom” in a b&d-type relationship as well as about power as it circulates through a whole society. It's a dark thought, and it flirts with blaming oppressed people for their oppression. But it’s also something that needs to be said: people often collude in their own subordination and even enjoy it. He was saying that the transaction of power in a relationship or in a society is more complex than it appears. And the bottom also must be where the power of resistance originates.