Democrat Kim Davis is Another Victim Of Religion 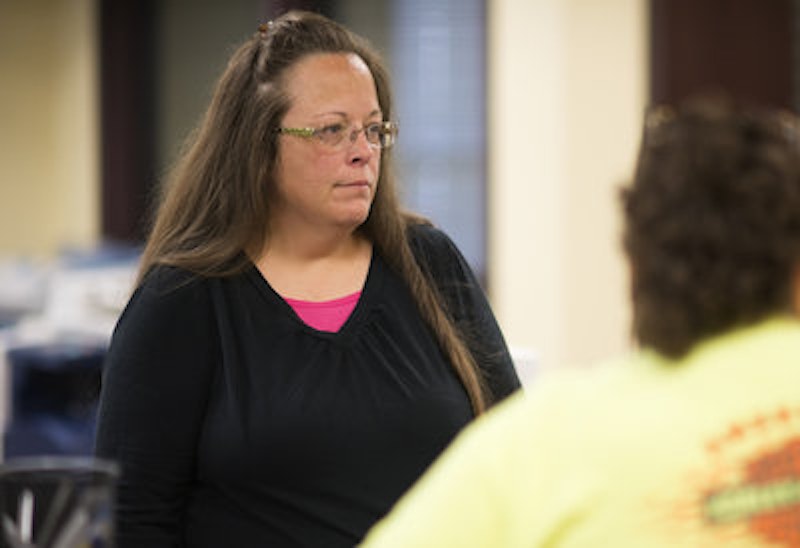 Rowan County (Kentucky) Clerk Kim Davis—a Democrat—has refused to issue marriage licenses to gay couples (as well as straight couples) since the SCOTUS ruling on gay marriage in June, and both sides of the gay marriage fence are up in arms. It didn't take long for the first highly-publicized test of the Supreme Court's June ruling in favor of same-sex marriage to come down the pike, and it's a doozy.

Yesterday, Davis, a hero to some ("Stand your ground!") and villain to others ("Do your job!"), went before U.S. District Court Judge David Bunning, who ordered her jailed on contempt of court charges until she agrees to comply with the law. Phase two of the national drama is about to commence.

Advocates of "religious liberty," who believe that it's oppression to force government employees to do their jobs as they are legally defined, are firmly in the Davis camp. Many of them are under the false, and ironic, impression that they are defending her First Amendment rights.

The ironic part of this Constitutional argument is that Davis has been, in fact, violating the 14th Amendment as it’s currently interpreted. The First Amendment argument doesn't hold water because, as a government official, Davis is required to uphold the law. If she’s unable to do so, she can quit and find another job. If she chose to, she could join Westboro Baptist and picket the funerals of soldiers with signs that read, "God hates fags." That's how much First Amendment freedom she has in this country.

The confusion is hardly limited to the Christian right, of course. Much ado is being made of Davis' checkered marriage history, which includes four marriages (two to the same man) and adultery. Twitter teems with breathless accounts of the public servant's past misdeeds. A sample tweet: "BOMBSHELL: #KimDavis Was Knocked Up With Another Man’s Twins While Married To First Husband."

This is not much of a bombshell, in that Davis, since "born again" into her Apostolic Christian religion, is now working with a "clean slate." Hey, that's what they believe. She's got that old-time religion now, thinks gay marriage is a sin, and doesn't want her name affixed to a certificate she feels endorses this sin. The political left is calling her a hypocrite, but the left rarely understands religion very well. Try criticizing an absurd belief of Islam and see what reaction you get from "liberals."

Speaking of not understanding things, let's move on to sex columnist and ever-present gadfly on all gay issues (his qualifications: being gay himself), the always unreliable Dan Savage, whose opinion on this matter is shared by much of the left. Savage told MSNBC that this is all a ploy by Davis to "cash in." He said her plan is to get fired, and maybe spend time in jail so she can then go on to hit the right-wing lecture circuit and "never have to do an honest day’s work ever again in her life.” She's making $80,000 in a nice, not-so-stressful government job, but she's got a better plan, which includes being unemployed and imprisoned. I suppose this could be true, but I'll need more evidence than Savage provides. By the way, Davis' mother held the very same job for nearly 40 years before Kim took over.

Salon often offers hyper-liberal, fanciful interpretations of the political landscape, and they didn't disappoint with this one. Here's a tweet: "Husband of Kentucky clerk Kim Davis issues violent threat: 'Don't come knockin' on my door.'" If you read the actual article, you'll learn that he and his wife have received (the usual) death threats, so who's the violent one? Joe Davis also said he was an "old redneck hillbilly," so I think everyone got the message. If you come after him and his wife at their house, after you threatened them with execution, he'll shoot you. It's known as self-defense, which I happen to support. Salon and Daily Kos can wring their hands all they want.

Who really knows what Davis' motivations are? It's all speculation. It's hardly axiomatic that she's a martyr wannabe who's trying to get rich riding the political gravy train. I'm thinking that she reached a certain age and took stock of her life. Not liking what she saw, she turned, as many do, to the easy comforts of religion and the opportunity for a fresh start. At this point, she truly believes that she "answers to a higher authority," and I don't doubt she thinks, however irrationally, that signing those marriage certificates may send her to hell. Jail beats hell any old time.

From past religious experience, I know what feeling you may go to hell is like, and it's not pretty. If her belief is sincere, her actions are logical. Kim Davis is just a pawn of the religion game who can't think for herself. She's behind bars now, so we'll see how committed she remains to her religious cause. Many hate her, but don't hate the player. Hate the game.