An overlooked passage from the Blumenthal-Hillary emails. 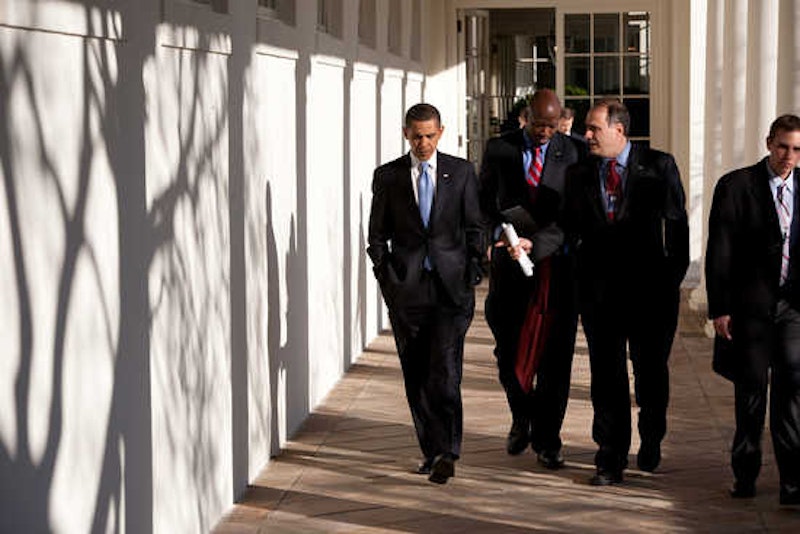 Isn't Sidney Blumenthal accusing David Axelrod of being a conduit for the Israeli government? I have in mind Blumenthal's email to Hillary of March 17, 2010. It's a long one, and it's been talked about because the email's second half says blunt things about Axelrod: that he shouldn't be allowed to talk about foreign policy and that reporters resent him. But the first half provides context, a wild context, and no one has paid attention.

The first half of the email talks about “highest level Likud/neocon propaganda,” and says The New Republic is this propaganda's “preferred outlet.” (Martin Peretz still held the magazine, though not for long.) “The New Republic was critical in undermining Carter when he pressed Begin,” the email says, because “Israeli intel” used the magazine to “put out the stories on Billy Carter.” Billy was President Jimmy Carter's no-account brother, and he caused the White House a lot of embarrassment back in the 1970s.

In the email's first half, Blumenthal names Michael Oren as a “channel for Israeli intel,” and Michael Ledeen as someone “trafficking in disinformation,” and there's The New Republic as a “preferred outlet.” Then, right after the item about Billy, he writes, “But TNR is only one key being hit in the mighty Wurlitzer.” Okay, a Wurlitzer has many keys, he's been naming some, he's about to name another. He clears his throat. “Here’s one small but frank thing: Axelrod should not be a foreign policy spokesman on any issue or area,” Blumenthal writes. And off he goes on his dissatisfaction with Axelrod and what to do about it. (At this point his manner with Hillary gets quite executive: “I’d make Steinberg tell Donilon they need to rein in Axelrod... Let it come from Steinberg. He's unhappy anyway.”)

But if the email's build-up counts for anything, wasn't Blumenthal saying that Axelrod was one more secret mouthpiece for the Israeli government? Why else the Wurlitzer crack? Unless he meant the same “mighty Wurlitzer” that liberal bloggers used to complain about, meaning the forces of right-wing political disinformation. But that Wurlitzer wouldn't include the person who got President Obama elected.

No one in the press has paid the email's first half any mind. Not that I can see. I checked the sites for Commentary, The Jewish Daily Forward, and The New Republic. Only Commentary had a lot about the Blumenthal emails. It was doomy stuff—“the Hillary-Sidney emails show just that the pro-Israel community will be on thin ice if she recovers and wins” —but nothing about Billy Carter and the “preferred outlet,” and nothing about David Axelrod's possible connection with Michael Oren and Michael Ledeen.

The Forward tucked Blumenthal into a piece about the advice various emailers gave Hillary regarding Bibi Netanyahu, Israel's pain-in-the-ass premier. (Blumenthal wrote that Netanyahu had a complex because his dad preferred his brother, who died at Entebbe.) The New Republic had nothing about the emails at all. Neither did Hot Air. The New York Times and The Washington Post focused on the Veep material, the emails' signs of cattiness toward the Obama White House. The Post: “Within Clinton’s Circle, Resentments Against Obama Persisted for Years.”

A good lawyer could argue that headline across the plate; after all, Blumenthal was within Clinton's circle. But the claims of Israeli media manipulation seem like a more natural lead.

For what it's worth, here's what was going on just before and after March 17, 2010. Israel had announced new settlements in the middle of Vice President Joe Biden's visit to the country. On TV, David Axelrod said of the announcement: “This was an affront, it was an insult, but most importantly it undermined this very fragile effort to bring peace to that region.” Perhaps that's what Blumenthal had in mind when he complained about Axelrod, though the comment doesn't sound all that Mossad-like. Well, the two men don't get along. One reads that Axelrod threatened to quit if Blumenthal got a job at State.

March 17, the day of Blumenthal's email, was also the day that Netanyahu was supposed to call Secretary of State Clinton so they could patch up the unhappiness about the new settlements. At some point on that same day, Clinton read her friends' thoughts about the Israeli media tentacles. If the thoughts had any influence over her, she still appeared with the Israeli prime minister at AIPAC before the end of the month. Blumenthal emailed advice about what to say at the AIPAC conference; Hillary didn't take the advice.

Finally, Wikipedia tells us that The New Republic articles appeared in October 1980 and contributed to the Billygate scandal, which had been cooking for months and involved Billy Carter's lucrative ties with the Libyan government. From Blumenthal's email, you’d think Israel had got the Billy story going. But not quite.

For me, the most striking thing is the silence just now about the Wurlitzer passage and the “ Likud/neocon propaganda” talk and the rest. You’d think Hot Air and Commentary would be jumping up and down at the sight of Hillary's courtier hissing in her ear about journalists allegedly turned by Israel. Nothing, and nothing about the apparent implication regarding Axelrod. When I say this strikes me as odd, I don't mean that I know what's really going on and can only hint at it. I don't say Blumenthal is wrong or right, just that the charge is striking and this is the only time I’ve seen the press look past a bright shiny object.