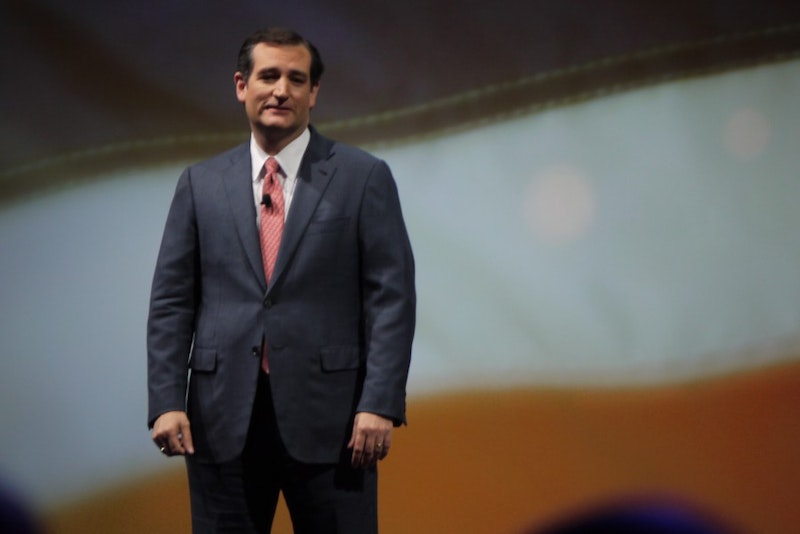 Keep in mind that most Republicans (over two-thirds) still want someone other than Trump. The problem is that their support is scattered among 16 other candidates. Together, they could stop this hurtling ride down Trump Highway to Crazytown, but how do you coordinate a unified effort and prevent Trump winning with a mere plurality?

Numerous politicians in the race could suddenly become selfless, heroic martyrs for their party and drop out, of course, but politicians are almost all self-aggrandizing sociopaths, so let’s assume that’s not going to happen unless the party leadership blackmails them or something.

Conventional wisdom—which I don’t think has been rendered completely irrelevant by Trump, just as Newtonian mechanics still has some uses around an object traveling at lightspeed—is that Republicans need someone, like Reagan, who embodies with some degree of smoothness the multiple factions of the coalition that is their party. Someone (1) religious, (2) free-market-oriented, and (3) in some sense or other nationalistic ought to fit the bill.

Now, you may well know that the only piece of that equation I really care about is the free-market part, and my favorite GOP candidate, the one most likely to take that part very seriously (at a time when I think the world desperately needs it), is Sen. Rand Paul. He’s also quite religious, though, and, like his father, believes national sovereignty entails the right to protect national borders. Let’s assume for the sake of argument, though, that he doesn’t sound quite gung-ho (or perhaps authoritarian) enough on those other two fronts to appeal to today’s populist Republican ears—and that his complaints about police brutality and the drug war might even be rubbing Republicans the wrong way.

If he doesn’t rise back above the one percent he’s at in the polls as I write this, might his Senate pal Ted Cruz (six percent) still make sense as a rallying point for non-yahoos and yahoos alike?

I know, I know, he seems extreme to many—and yet: Smart (if you don’t think so, you probably only know him from snippets taken out of context). Religious. Somewhat libertarian. Mouthy and anti-establishment enough even for disenchanted Trump fans. And get this: calculatedly respectful toward Trump when most people are not. Perhaps even dreaming of a Trump/Cruz ticket.

But looking beyond the party coalition to the good of the nation: maybe Cruz is also the man to square the circle of border enforcement and personal-Latino-success-story narrative, at a time when we really need to avoid further insanity in that area. So much of politics is about hoping the masses can be nudged in a less-damaging direction, and a President Cruz just might make us forget that we almost sounded as if we were on the brink of war with Mexico during the overheated summer of 2015, even while he surfed the populist rage of the day.

It’s not an ideal solution. But then, those don’t appear to be on offer.