A Remembrance of Maryland’s Marvin Mandel 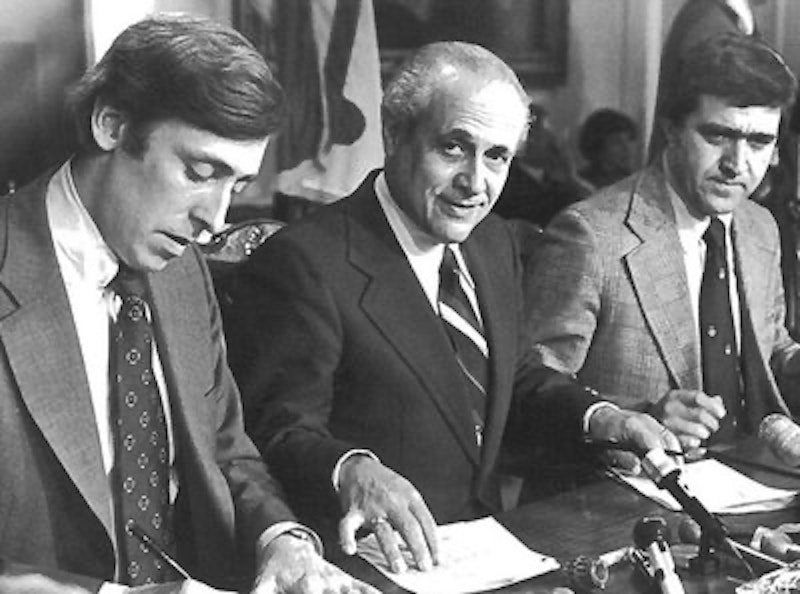 The following is adapted from a longer manuscript that will be published soon. This brief updated excerpt from the afterword reprises the cast of characters from the 1970s melodrama about the rise and fall of Gov. Marvin Mandel and, for those Marylanders in the know, his rise again from divorce, remarriage, trial, removal from office, imprisonment and, ultimately, presidential pardon and a reversal of his conviction, with no public regret or remorse. The public loved him nonetheless.

The blended family of Gov. Marvin Mandel stood shoulder-to-shoulder in the receiving line at his funeral services on Sept. 3, 2015, led by the Mandel matriarch, Barbara “Bootsie” Mandel, and her two children, Gary Mandel and Ellen Mandel Maltz, and the four children of Jeanne Blackistone Dorsey—Paul, Philip, Helen and John Michael, who was represented by his son, John. They were joined by a slew of Mandel’s grandchildren.

Marvin Mandel is dead. The government he fashioned lives on. The model has been tweaked, expanded, adjusted, but its format remains intact 45 years after it was conceived, an audacious undertaking that would reform and modernize the way Marylanders live and are governed.

At his 95th birthday celebration on May 13, 2015, Maryland’s 56th governor appeared bald, shuffling as he walked, when he could walk without aid, the eyes all droopy and sleepy, but the switchblade mind was as sharp and lucid as ever. He remained among the shrewdest political analysts in Maryland as well as a practicing lawyer who, until a few years ago, argued cases in courtrooms against attorneys half his age. Mandel long ago gave up his trademark meerschaum pipe, obeying doctors’ orders instead of issuing directives.

Mandel had achieved what historians consider the state of eminence grise. He had managed to outlive many of his contemporaries and with time many of his indiscretions had evanesced as memories faded and disappeared. Mandel was a politician lost in time. Succeeding generations hardly know who he was let alone thrash over the history of seven governors ago (eight if the abbreviated ascendancy of Lt. Gov. Blair Lee III is included.) Mandel was Maryland’s first and only Jewish governor, a noteworthy achievement at the time but a quaint artifact now.

But Mandel was stubbornly unrepentant and unapologetic as he spent time those days repatriating himself and, as most politicians and athletes do, having a tough time letting go of yesterday. He lived his remaining life in retrospect. Immortality may have eluded Mandel, but he was busy making a heroic grope for it. In one final ironic twist of the screw, Mandel died on August 30, 2015, in, of all places as if the gods preordained it, St. Mary’s County, where he had carried on an extra-curricular romance from 1963 until his very public divorce and eventual remarriage in August, 1974. His abundant heart finally gave out.

In March, 2014, Maryland Public Television premiered a half-hour documentary that had been a year in the making. It was called Marvin Mandel: A Complicated Life. Listed in the credits were a slew of Mandel friends, who opened their checkbooks to have their names affixed as sponsors of the production. But the real credit goes to Lou Davis, MPT’s State House reporter, for his usual even-handed approach to a delicate and, as the title indicates, complex subject. Mandel was alive and feeling his oats again, if only for half an hour, exhaling a sigh of relief that the presentation could have been worse, much worse.

Mandel was not the personage today that his liberal and progressive record says he is or was. He had receded into a conservative mindset, mainly for recognition and a determined refusal to let go. He contributed his name to two of Maryland’s most conservative organizations, The Maryland Public Policy Institute and the Maryland Business for Responsive Government. He supported Republican Gov. Robert L. Ehrlich Jr. in 2002 and again in 2010 and was an outcast in the Democratic State House of Gov. Martin O’Malley (D), not so much of Mandel’s own doing but more because of his close association with his sideman and advocate, the convicted lobbyist Bruce Bereano, by O’Malley’s own words.

Mandel’s visibility was restored, at momentary times, when another Republican governor, Larry Hogan, assumed the lease in 2015 on Mandel’s former State House office. His 95th birthday celebration seemed more like a Republican rally than a tribute to his life, longevity and legacy. The occasion and the life were probably best summed up by Ehrlich, who observed, “This is a momentous night. Every living Republican governor in the same room.”

Jeanne Blackistone Dorsey Mandel died an agonizing and debilitating death on October 6, 2001, her youthful alabaster good looks erased by time and tragedy, tethered to machines when her body was ravaged by ALS (Lou Gehrig’s disease) and unable to function on its own and attended by around-the-clock nurses. Time has a way of dealing with vanity.

Mandel read to her every morning before leaving for his law office and again in the evening when he returned. Mandel had a request as Jeanne lay wasting. He asked for help with arrangements that had been made for a story about the two of them, kind of a public Valentine that he could read to her, for hearing was her only remaining sensory or muscular function.

The story was admirably and tenderly written by Karen Hosler, a former State House reporter for the Annapolis Evening Capital, who took a month’s leave from her White House beat to retrace the romance, and it appeared on the front page of The Baltimore Sun on February 11, 2001, the Sunday before lovers’ day. It was Mandel’s box of chocolates to Jeanne.

At about the same time, the late James B. Rowland, a former State House reporter for The Washington Star, called to say he no longer had need or use of all the tape recordings he had made of Mandel’s weekly news conferences as a reporter. Hearing the offer, arrangements were made to deliver them to Mandel so that he could play them for Jeanne with the understanding that they would ultimately be donated to the State Archives, where they now repose and are available online.

All Jeanne’s body would allow was for her to listen. The skeptics, and there were many, said the marriage would never last. They were wrong. Mandel and Jeanne were married for 27 years until death did they part. He watched over her to the last mechanical breath.

Barbara “Bootsie” Mandel, similarly 95 as her high school sweetheart, is alive and well and looking terrific, youthful and exuberant as ever in a new-found life in a long-term relationship. Bootsie divides her time between Florida and her encampment at the Imperial Apartments, in Northwest Baltimore, where she established herself after the divorce. She is barely visible these days, except for frequent dinners at the Woodholme Country Club and other celebratory occasions, far from the familiar daily “sound bite” that she was during the five months that she barricaded herself in the governor’s mansion after Mandel announced that he was dumping her for Jeanne. In the funeral receiving line, Bootsie confided that in recent years she and Mandel had become friends again, phoning regularly and visiting occasionally. According to a report in The Washington Post, Bootsie shoveled the first scoop of earth on Mandel’s lowered coffin, as is the Jewish custom, with the parting sentiment: “God bless you, darling.”

Gary and Ellen, Mandel’s son and daughter and attorneys like their father, are living in Los Angeles, each on his and her own. Ellen married a second time, to a physician. Her husband died an untimely and unfortunate death several years ago when Ellen arose one morning and found him collapsed of a heart attack on the bathroom floor of their home.

Ellen had repaired her relationship with her father, which had withered at the time of the divorce announcement, and four times, to my knowledge, flew east to attend major birthday occasions for Mandel, milestones 85, 90, 94 and 95. She also rushed east to be at Mandel’s side when he was stricken with a respiratory ailment early in 2012. She traveled east, once again, with her daughter Marissa, to wish her father farewell.

Gary was last reported to be a car salesman and later president of a company that repairs slot machines at California gaming emporiums, presumably under the patronage of his step-brother, Paul Dorsey, the center of it all, a consultant to the gaming industry and former Maryland Lottery official. Gary went through a troubled period of addiction to the pain-killer Oxycontin, for a chronic back problem, and did some regrettable things while under its opiate influence. He sued the administering physician and won the very public case in court. Gary delivered a touching yet humorous eulogy at his father’s funeral.

Irvin Kovens died in 1990 of heart and associated ailments after surgery failed to repair the damage that strangled his circulation and left his legs blood-deprived and the color of mahogany. He left an estate of functions that no one has been able to fulfill and, in the new age of electronic politics, makes dialing a phone and asking for political contributions seem downright quaint but in its own way more commanding and effective than an email from computer central that will never return the favor. Nor will it ever be recorded in Kovens’ thick binder of outstanding chits.

Dale Hess lives on as a prosperous potentate in a McMansion somewhere on the Gulf Coast of Florida, around Tampa. Early in 2015, Hess developed health problems and returned to live in the Baltimore area for quick access to its superb medical care. Hess and Mandel, after not speaking for years, were once again on friendly terms. Hess regularly attended the get-together birthday luncheons and celebrations for Mandel that Maurice Wyatt organized for what remains of Mandel’s staff, associates, cronies and other assorted characters whose company Wyatt and Mandel enjoyed and who, in turn, reveled in Mandel’s familiar retelling of hi-jinks from his grab-bag of familiar stories. Hess was an honorary pallbearer at Mandel’s funeral.

Harry Rodgers emerged from prison and the wreckage of Tidewater Insurance to form another company, Boone Rodgers Insurance. He lives quietly outside the seductive influence of politics with his wife, Bobby, somewhere in Baltimore.

William Rodgers and Ernie Cory have passed. Rodgers died of prostate cancer at what is considered by today’s actuarial tables a young age. And Cory, after the scandalous trial in which he was merely a tertiary figure, squeezed out a living as a sailing instructor in, of all places, Annapolis, in the shadow of the State House where he once pretended to have influence and access.

—Frank A. DeFilippo was Gov. Marvin Mandel’s press secretary, speechwriter and later chief of staff from 1969-78.