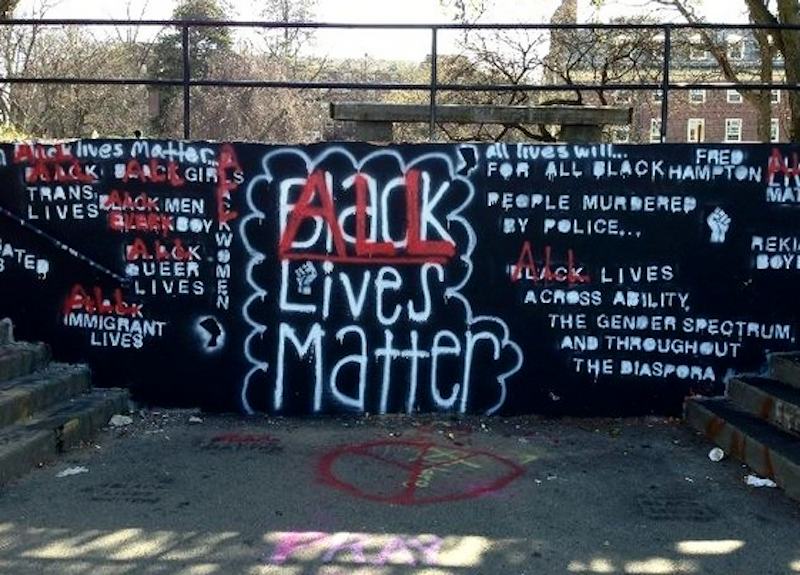 Did it strike anyone else as odd when those protestors disrupted a Hillary Clinton event under the banner “Black Transgender Lives Matter”?

There are so many layers of irony and misunderstanding in these subcultural political arguments these days that it’s hard to know how many I can peel away at any given time without causing outrage, so once more I have to preface a comment by saying I’m neither anti-black nor anti-trans. But you can point out a possible problem with a movement without wanting to reverse everything it believes. That said, let us try to proceed.

A vocal leftist faction has insisted that altering the “black lives matter” slogan to, say, “all lives matter” is an evil, racist thing to do—even though two-thirds of blacks themselves prefer the “all” construction according to one survey and even though one would hope the “all” construction is both true and inclusive. Who really thinks we tend to gain from deliberate division?

But the left—not just the trans movement, which is merely the left’s instrument of the moment—likes chopping us up into ever-smaller, ever-more-combative populations, so of course it has no instinctive negative reaction to whittling “black” down still further to “black transgender.” Okay, fine, no great harm in focusing on your particular constituency, really. There are Irish parades, after all (though William F. Buckley, who I wrote about Tuesday, memorably declined to walk in them while campaigning for mayor, saying he should strive to represent all people—a noble, perhaps antiquated sentiment).

But once we accept the “trans” variant on the slogan, I wonder where it will end? How long before Black Lives Matter ends up protesting against itself over some such eruption of factionalism?

I’m reminded of one of my favorite gauges of cultural evolution at Brown University reunions: seeing how many letters they’ve added to the name of the main lesbian/gay organization. I remember when it was just L and G. Then LGB. In time, a T for trans and later a Q, though I predict it will stop there for Brown because that’s the point when the new building/center was named, and real estate is less fluid than politics.

Meanwhile, the ambitious people at UC Davis on the other coast have gotten it up to at least at least seven letters, with LGBTQIA, and I’m sure somewhere out there is a group with the longest abbreviation of all, probably telling themselves they’ve achieved a great victory by making it so long.

So at what point in these sorts of coalitional games does it become permissible to suggest replacing numerous variables with “all,” I can’t help wondering? Can we skip ahead to that part, or is that something impatient straight white males say?

One reason I haven’t given up on the gruff, dismissive, short-tempered masses who sneer at this p.c. stuff is that I suspect they’re usually moved by something far more wholesome than hate, though they may not even have thought it through: efficiency. They want simple rules that apply to everyone—not to mention short words—and are suspicious of anything that sounds like special pleading, whether on behalf of a traditional or new-fangled subset of the population.

Sure, the lazy majority in the U.S. (still 78 percent white, by the way, and well over 90 percent straight) may need its attention drawn to specific local problems, and a gay student center is not obligated to be an astronomy lab or a Turkish history pavilion. No Adam Smith fan objects to specialization. I just think you’ll sometimes get farther drawing the majority’s attention and sympathy—if you even want it—by using powerful words like “everybody” and “people” and on occasion even “Americans.” They’re very inclusive.