Days of Heaving at the DNC

Democratic establishment panicking as they see a left red wave coming this fall. 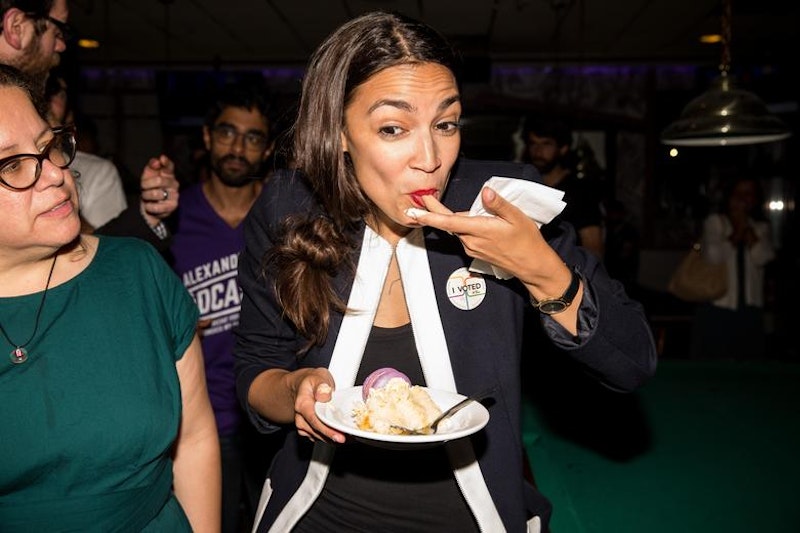 I’m sweating from the heat wave in Baltimore on this Independence Day, wishing I could write from an igloo. But I’m not panicking and having a severe existential crisis like Nancy Pelosi and the rest of the Democratic establishment that was completely spun out last week by 28-year-old Alexandria Ocasio-Cortez’s blowout upset win over Joseph Crowley, an incumbent for nearly 20 years in New York’s 7th and 14th Congressional districts. Ocasio-Cortez, a Democratic Socialist, cried tears of joy in a Bronx bar surrounded by supporters and loved ones last Tuesday, while Crowley held back tears of devastation as he performed Bruce Springsteen’s “Born to Run” with an acoustic guitar for his shell-shocked fans.

At least he dedicated the song to Ocasio-Cortez, a rare gesture of grace from an otherwise aloof Democratic party. Michelle Goldberg had a surprisingly positive op-ed in The New York Times last Sunday on Ocasio-Cortez’s win and what it portends for the left and the Democrats moving forward, bluntly titled “Millennial Socialists Are Coming.” Breaking from her timid centrist colleagues (like Frank Bruni, whose piece yesterday, “The Supreme Temptation of Amy Coney Barrett,” was all hot air, a readymade Trump whiner piece, merely fulfilling quota), Goldberg is open to and even mildly enthusiastic about the rise of the Democratic Socialists of America since 2016.

Goldberg writes that the D.S.A.’s members “are generally quite serious about the ‘socialist’ part of ‘democratic socialist.’ Its constitution envisions ‘a humane social order based on popular control of resources and production, economic planning, equitable distribution, feminism, racial equality, and non-oppressive relationships.’ Talk of popular control of the means of production is anathema to many older Democrats, even very liberal ones. It plays a lot better with the young; one recent survey shows that 61 percent of Democrats between 18 and 34 view socialism positively. The combination of the Great Recession, the rising cost of education, the unreliability of health insurance and the growing precariousness of the workplace has left young people with gnawing material insecurity. They have no memory of the widespread failure of communism, but the failures of capitalism are all around them.”

That last sentence is particularly astute, a dead-on diagnosis that doesn’t lean either way, unlike almost every other outlet covering Millennials and the D.S.A. Centrists.

Liberals dismiss Ocasio-Cortez and her cohort as delusional, pie-in-the-sky moon kids who want everything for free. Conservatives, on the other hand, have absolutely no idea how to combat a leftist with a concise platform without any of the obfuscation, corruption, or rhetorical gauze of ghouls like Nancy Pelosi. They spent eight-plus years calling centrist Barack Obama a communist and a socialist (among many other things)—now they’re without a paddle.

Pelosi, who famously proclaimed, “We’re capitalists and that’s just the way it is” last year, dismissed the possibility of a red D.S.A. wave in November and in 2020, and insisted last week, “They made a choice in one district. So let’s not get yourself carried away as an expert on demographics and the rest of that... The fact that in a very progressive district in New York it went more progressive than... well, Joe Crowley is a progressive, but she’s more left than Joe Crowley, is about that district. It is not to be viewed as something that stands for anything else."

Goldberg’s right that “socialist” is losing its luster as a slur against Democrats, and regarding Pelosi’s comments: “I think she’s dead wrong. There are more candidates like Ocasio-Cortez out there, and the Democratic Party should welcome them. It needs their youth and zeal and willingness to do the work of rebuilding the party as a neighborhood institution. And they’re coming, whether the party’s leadership wants it or not.”

Attempted attacks on Ocasio-Cortez’s authenticity, like that ridiculous New York Post Page Six piece about the (very modest) house that she grew up in in the otherwise wealthy suburb of Westchester. Centrist and liberal leeches have been looking for anything they can find on Ocasio-Cortez, but so far have come up with the fact that she grew up in a house, and that an ex-coworker is “no fan” of hers.

Bruni, Ross Douthat, David Brooks, Maureen Dowd, Thomas Friedman, and the rest of the Times stable of milquetoast centrist bores will continue to fill column inches with nonsense about civility, “values,” and why the left needs to understand and listen to Trump voters. Despite the fact that all they do is bitch about Trump, they don’t seem particularly eager to embrace the D.S.A. because the world they want would be just as disruptive, if not more so, to their very comfortable and cosseted lives.

They’d rather have a flagrantly objectionable and disturbingly unpredictable president like Trump than anyone who’d redistribute wealth, no matter their disposition. Mr. Rogers could rise from the dead and calmly advocate for universal basic income and the DNC and Times would still stone him and do their best to bury him and his cardigans in mud. They’ve shown their true colors this past week, and their methods of subterfuge are past expired. No one’s listening anymore.