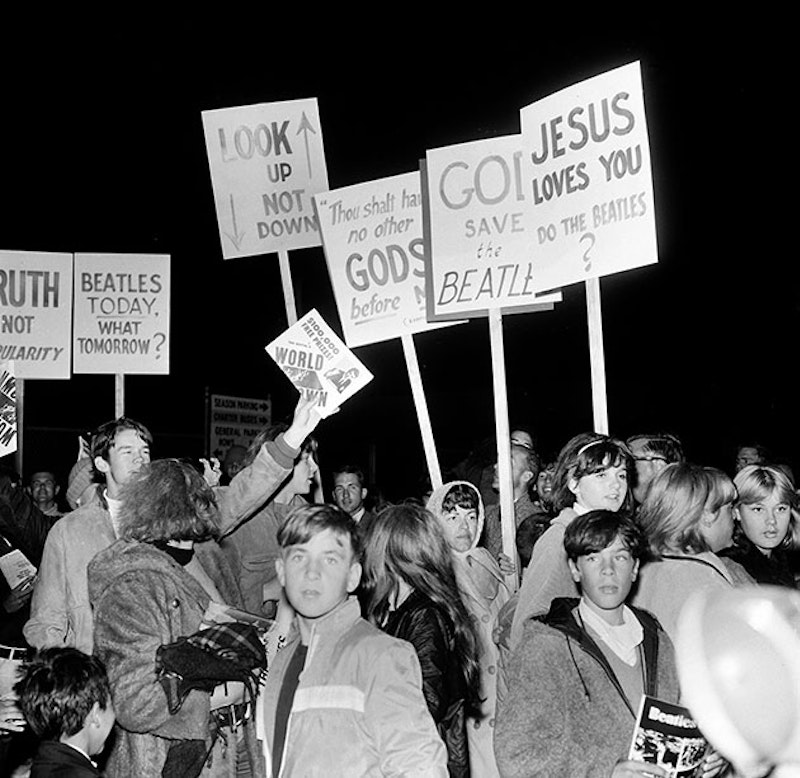 Published on the Fourth of July, Richards’ piece addresses “The 5 Hardest Questions in Pop Music.” The questions are: Is culture appropriation ever okay? Should we listen to music against a dead artist’s wishes? Can today’s artists still sell out? How should we engage objectionable lyrics? Can we separate the art from the artist?

In the section on cultural appropriation, Richards makes the argument that musicians should self-censor themselves in deference to prevailing political orthodoxies.

If someone has ever made an argument more antithetical to the spirit of rock ‘n’ roll, I haven’t heard it. Richards describes a band that so loved a record by an R & B artist that they wanted to cover it. They finally decided not to: “A band of white indie rockers performing the songs of a black R & B singer? No way. It would be seen as cultural appropriation.” Richards writes, “As badly as I wanted to hear their covers they were right.”

Richards argues that cultural appropriation is wrong and should be avoided when it feels like “taking” instead of “making.” “When Justin Timberlake beatboxes, or Taylor Swift raps, or Miley Cyrus twerks to a trap beat,” he observes, “it feels like taking. Nothing is being invented other than superficial juxtaposition. On the flip side, when the Talking Heads echo African pop rhythms, or the Wu-Tang Clan channels the spiritually of Kung-Fu cinema, or Beyonce writes a country song, it feels more like making. The borrowed elements become an essential, integrated part of a new, previously unheard thing.”

He adds: “We think we know this difference when we hear it, but sometimes we don’t—so there are more questions to ask, and many of them point toward an imbalance of power.”

In other words, pop music should submit itself to the tendentious social engineering of the social justice left. That Richards can write such Frankfurt School Marxist claptrap, replete with a call for censorship, and says he’s a fan of pop music is ridiculous.

Rock ‘n’ roll has always been about freedom. From Elvis to the Beatles, Bad Brains to Radiohead, the art form that started as an erotic alternative to square America retains its power because it retains its freedom, which has grown more expansive over the decades. Rock and pop music artists are able to record songs about any topic, and record them using whatever instruments they find most compelling, and imitate any genre they want. When the music tears down racial walls and genres and populations dissolve into each other, whether it’s “taking” or “making” or just a lark, the result can be thrilling.

And if a hard rock band want to cover Michael Jackson and their version is tepid, bizarre and even sucks, better to have it than not. The alternative is staying in the box, not taking the risk, and not following your spirit and soul and passion.

When I worked in a record store in the 1980s, the group Ciccone Youth, a side project of Sonic Youth, released The Whitey Album. It featured twisted and deconstructed covers of 1980s pop songs, including Madonna’s “Into the Groove.” The Whitey Album is a white art-punk band covering a dance artist from Michigan girl who’d moved to New York and appropriated gay club fashion and black dance music.

We loved this stuff. Now our enlightened betters like Richards put it on a list of forbidden art. That is, if it ever gets recorded. Better to convince a band that a potential idea is a thought crime and they shouldn’t even attempt it. Kill the imagination in the crib.

In his book Camelot and the Cultural Revolution: How the Assassination of John F. Kennedy Shattered American Liberalism, James Piereson argues that since the assassination of John F. Kennedy, the American right and left have changed positions. Whereas American conservatism in the 1950s was paranoid, censorious and suspicious of art, after the death of Kennedy it was the left—a left that hated America because they were unable to accept that Kennedy had been killed by a communist—that became intolerant, anti-American philistines.

Chris Richards is no different from the people who burned Beatles records.

“Liberals are killing art.” That was the conclusion of a 2014 essay by Jed Pearl in The New Republic. Pearl’s words are more disturbing today:

“Do more and more liberals find the emotions unleashed by the arts—I mean all of the arts, from poetry to painting to dance—something of an embarrassment? Are the liberal-spirited people who support a rational public policy—a social safety net, consistency and efficiency in foreign affairs, steps to reverse global warming—reluctant to embrace art’s celebration of unfettered metaphor and mystery and magic? If you had asked me ten years ago, I would have said the answer was no. Now I am inclined to say the opposite. What is certain is that in our data- and metrics-obsessed era the imaginative ground without which art cannot exist is losing ground. Instead of art-as-art we have art as a comrade-in-arms to some more supposedly stable or substantial or readily comprehensible aspect of our world. Now art is always hyphenated. We have art-and-society, art-and-money, art-and-education, art-and-tourism, art-and-politics, art-and-fun. Art itself, with its ardor, its emotionalism, and its unabashed assertion of the imagination, has become an outlier, its tendency to celebrate a purposeful purposelessness found to be intimidating, if not downright frightening."