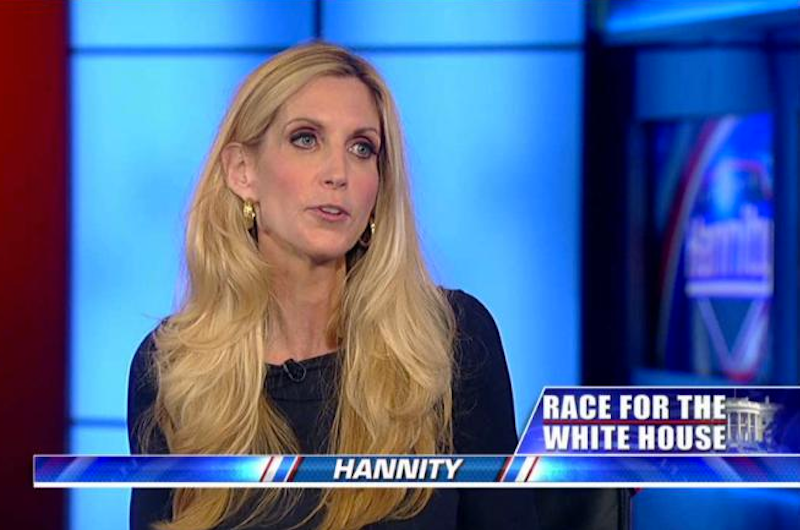 “O’yahh,” Ann Coulter says. It’s her version of “Oh yeah,” signaling offhand agreement, but her throat crumples the phrase up before pushing it out. “O’yahh,” she says a second time. The “yahh” has a rising inflection, but just at the end. The syllable seems to twitch upward just before it dies in Coulter’s mouth. Sean Hannity’s talking about the reckoning he’ll level on traitor Republicans if Donald Trump gets beat. “O’yahh,” Coulter tells him. She’s not that interested in what Hannity has to say.

“They’re not thinking about getting rid of Obamacare—”

“—not thinking about energy independence.”

“It’s utterly, um, utterly sell-fish,” Coulter says, meaning “selfish,” of course. She says the word with the lilt of somebody wrapping up another person’s point and proceeding with her own. Indeed, earnest Hannity has shut up and his mitts have fallen. Coulter proceeds. She does so at her leisure, which is the privilege and hallmark of a speaker who commands. She won’t be interrupted and nobody will stop listening. She can angle her face down and away from the camera, she can say “um,” she can drawl. In fact she does all these things. “Their motto, as I was saying, is, um,” she says. This “um” may be louder and longer than the first. Either sounds like a cot that’s so creaky it’s going to die.

The motto of the traitor Republicans is that they regret they have but one country to give to get on TV. Coulter also reveals that Trump has to win or the Republican Party’s doomed, that America is now California, and that Mitt Romney had the best position on immigration of any pre-Trump presidential nominee. Unlike John McCain, or “Mr. Amnesty,” as she calls him.

“Ha ha ha ha. ‘Get Drunk and Vote for John McCain.com,’” Hannity says. He’s savoring the name of a website that Coulter says she ran back when McCain was the nominee.

Coulter says that Rick Wilson isn’t good-looking enough to get on TV in his own right. Yet there he is on MSNBC because he bad-mouths Donald Trump. “All of the elites want to stop Trump,” Coulter says, winding up. “This is up to the people and it’s up to Trump.”

“All right,” Hannity says. “Ann Coulter—” Satirically, she swings her chin up and pops a smile, a gal making fun of her money shot. Hannity continues, giving the name of her website and the coordinates for her next book signing. The two of them banter: she didn’t invite him to the signing, but now he’s invited.

Is the Republican Party doomed? I don’t see why not.