But he does resemble Will Ferrell. 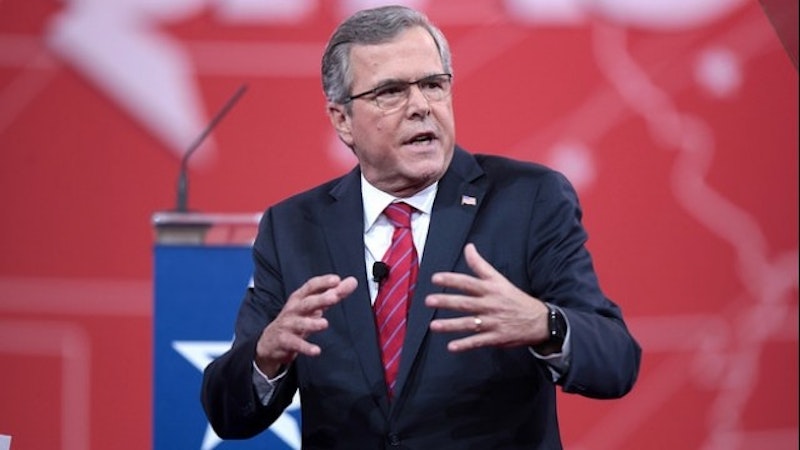 Jeb Bush's super-PAC has spent close to $44 million on "a gusher of door-hangers, mailers, online ads and TV spots" since Jeb officially started running in June. This is almost "five times more than what any other candidate-aligned super PAC has reported this year," The Washington Post says. People talk about Jeb's mountain of money. It is now a hill, and Jeb is a molehill. In June his Real Clear Politics average was 11 percent. Now it's four percent. American politics as we know it has been built around TV ads and the money that buys them. But something has gone off-angle. "Because of the many channels of information across all these media platforms, paid advertising is having as limited an effect as anyone can recall," says some guy, "a GOP strategist." Sure, he's right. On the other hand, smart people with a decent candidate could work those platforms.

Then there's track record. The Post notes "deep skepticism in the Republican base about his establishment ties and family name," with "his" meaning Jeb's. The base is those people who show up election after election to vote Republican. They despise, or have deep skepticism for, the name Bush. That's because Jeb Bush's older brother was president and they noticed what happened. The higher-ups in the party never caught on. James Baker, interviewed on TV about the 2000 recount, bent his mouth in a puckered little smile at the thought of an Al Gore presidency. Things had turned out for the best, he said. This was in 2007 or ‘08.

If Baker can't learn, nobody can. His caste is mentally frozen by history, an Ancien Regime. Late in 2014 the fossils had Mitt Romney on one line and Jeb on the other, and the old men chose the future: they went with the kid. Not the man who lost 2012, stalwart though he was, but the little brother of President Iraq. This would have been a desperation move, except they weren't desperate. They could’ve called Marco Rubio. Apparently they saw no need. Mitt or Jeb was their universe of choice, and they chose Jeb, the smart Bush. This time, they figured, they could do it right. They had no idea that nobody trusted them to do anything ever again.

Will Ferrell again. To me it's like Jeb is living the plot of a Will Ferrell movie. The big doofus is pitted against a smooth little rival—I mean Marco Rubio—who used to be his protégé. The movie would take that protégé business all the way and give us flashbacks of Gov. Jeb striding Tallahassee while Rubio clattered after him, folders stuffed under his arm. The movie Rubio would be the governor's sidekick, his little buddy. During crowd scenes he would hop straight up and down so the governor could catch sight of him. At one point the folders would spill out from under his arm, and the guv would belly-laugh like a fool.

Most Will Ferrell characters are kind of like Jeb Bush. They squeak and they're husky. With their height and build they ought to be strong, but they aren't. They're big kids turned to flab, and their goal in life is a pat on the head. Tank in Old School, the elf in Elf, the doofus in Step Brothers—even Ron Lavender, though a stud, has his pronounced streak of Jebness. Ferrell's George W. Bush is a little different from the rest, but that's all. W. has persuaded himself he has it made, that he's all a man should be, and he fights off contrary evidence. Even so, he can yelp; reality gets its knife in and his voice goes up. The others just have those moments more often. Enthusiasm carries them as they blunder along, but when events don't work out—when there's no pat on the head—their voices climb high. They're not just indignant, they're plaintive. “I've got a lot of really cool things I could do other than sit around, being miserable,” Jeb says. A Ferrell character would say that at a political gathering. So would Jeb. Nobody else would.