Cold Steel in the Hour of Chaos 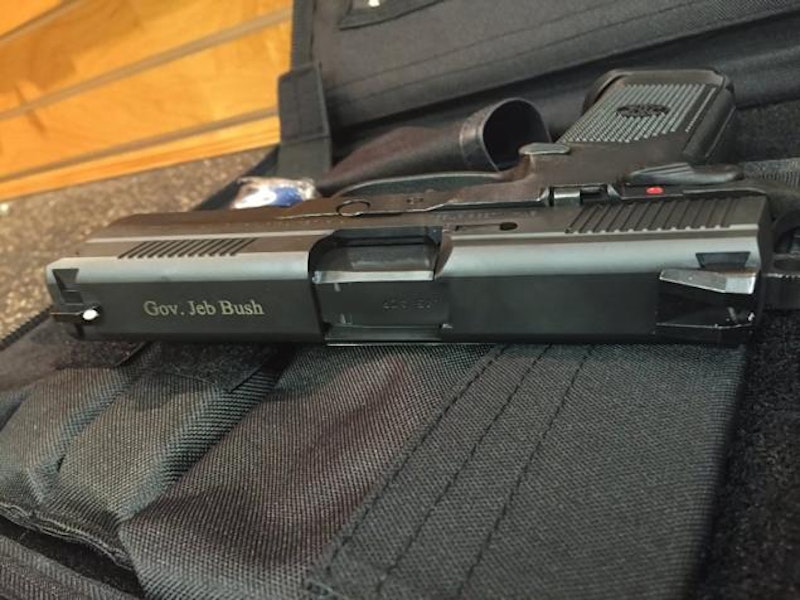 Jeb Bush continues to run for the GOP presidential nomination, even as it appears that running for president is the last thing he really wants to do. There’s a resigned dutifulness to the whole thing, a hangdog sense of playing out the clock. His every media appearance signals a weariness, as though Bush has internalized the harsh reality that nothing he says or does is likely to break through the glass wingnut ceiling of circa-2016 Republican dogma. The man could do anything right now—anything—and no one would care. Bush could dryly advise Donald Trump to “go fuck yourself” in a stump speech. Bush could cold-cock Marco Rubio backstage at a conservative think-tank forum. Bush could fit a breakdancing crash-course into his campaign schedule and then subsequently take advantage of a debate lull to stick a funky-fresh downrock on national TV. Bush could dispense brass-knuckled noogies to anyone actually bored enough to heckle him in public. Even if he did every one of these things in succession, the polls still wouldn’t shift a quarter of an inch. Nothing’s possible, and nothing matters—which might help explain why, earlier this week, he Tweeted “America” alongside a photograph of a handgun engraved with his name.

The Internet commentariat was swift to ascribe unspeakably dark motives to this social media gesticulation. But what if there’s a less morbid, less pathological explanation? Perhaps Bush wants to us to be aware that he supports the right of all Americans to exercise their storied Second Amendment rights—as long as we make a point of bearing arms that are personalized. Maybe he’s a pragmatist at heart, and this is a symbolic way of cutting back on a security costs; maybe the guy just feels safer mingling with potential constituents while packing heat. Maybe this engraved handgun model is a first taste of actual campaign merchandise, and replicas will be floating around on eBay for $50 a pop come summer. And, you know, it’s equally likely that the ex-Florida governor is subtly promoting a mockumentary about a fading presidential candidate who earns his private investigator’s license who sitting unnoticed in greasy spoon after greasy spoon in preparation for life after politics. Let’s be real, though: this dude’s desperate for any attention we can spare—even if it evaporates faster than Martin O’Malley’s presidential prospects did.