Clinton, Sanders, and the Idealistic Divide

If only there were a viable third party. 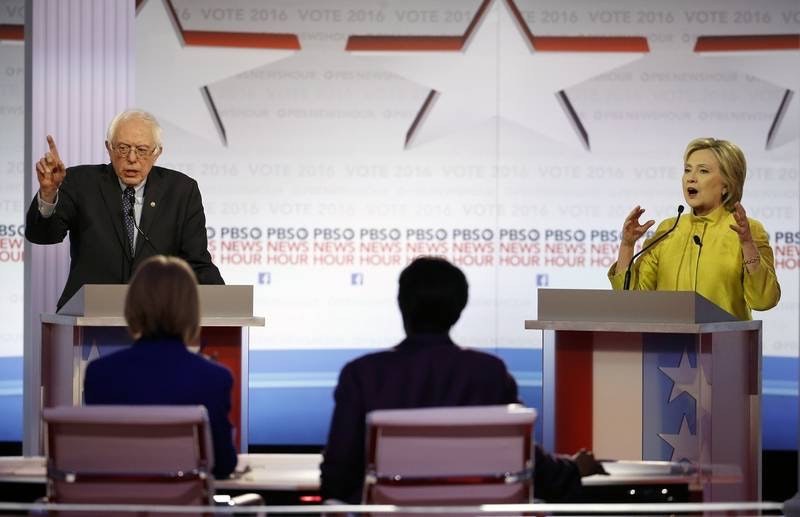 We raised our glasses in unison, smiling, and drank. A toast was only appropriate; these days, how often can you actually have a spirited political debate, tell the other person they’re just plain wrong, and still make a new friend at the end of the night?

I’d gone out that night because a potential date had fallen through, and I’ll be damned if I waste a perfectly good outfit-makeup situation. (I waited 25 years to start looking pretty, so now “flaunting” is most certainly my watchword.) My good friend Cassandra, with whom I’d worked as a field manager for New York’s Working Families Party, invited me to a Brooklyn bar called Drink. As I walked in, she introduced me to another young woman—we’ll call her Liz—whom neither of us had met before that night.

We rapidly descended into a discussion about whether Hillary Clinton was a favorable candidate over Bernie Sanders. It’s not something you generally bring up immediately with a stranger, but I’ve always enjoyed talking politics, and Cassandra and I have generally avoided getting into debates (partly because I was always pretty sure she’d win); I was curious to actually get into it and see where we stood.

What followed is what I believe to be a fairly accurate summation of the Democratic Party’s dilemma in this primary race. When the Right faces internal conflict these days, it seems that the only issues at hand deal with how far a candidate is willing to go to court the radical wing of the party. Whether or not a course of action is attainable is immaterial, so long as the candidate is visibly passionate enough about making it a reality. Not so with the Left. The Democratic Party is torn between its progressive ideals and its pragmatism, and has been for years—which is why the Clinton-Sanders conflict has escalated so dramatically in public discourse: the pressure’s been building since the early days of Bush II’s administration, only blowing off a small amount of steam under Obama’s.

Cassandra, although not all in for Clinton, had strong words to say on her behalf. "She knows how the game is played," she insisted. "She can walk into that room [filled with establishment men] and get it done." Sanders is combative, and may become totally uncompromising upon ascending to the executive branch—not helpful in the polarized political climate. But Clinton knows men in power want to think that they came up with certain ideas, and is willing and able to plant those ideas in their heads to sow the seeds of incremental growth. That’s proven to be the most reliable path of progressivism: strong words to influence slow change.

That said, Sanders is certainly running an idealistic campaign, but there's nothing to say he can't back off when the need arises. He's a socialist with 25 years in Congress, for God's sake. He knows how, when, and in what measure to sacrifice his principles for the sake of the country. The question is whether he’ll do so in a more positive way for the country than Clinton.

And maintaining that idealism whenever possible is vital to Sanders’ candidacy. This country was founded (at least on paper) with idealistic principles that serve as our fundamental guidance system: we must always strive to be better than the country we were yesterday. We should elect leaders who will look to the future of the nation by enacting long-term strategies to help us grow into an ever-improving force for good in the world. On this front, Sanders is solidly ahead—Clinton's strengths, nationally established as First Lady and honed in the Senate and as Secretary of State lie almost entirely in her ability to compromise in pursuit of her/our endgame. Under a Sanders administration, we’d certainly see greater advocacy and pressure for progressive initiatives—attacks on Wall Street, social welfare programs, etc.—which wouldn’t necessarily be advocated for as strongly under Clinton.

On the other hand, America's founding idealism was fundamentally flawed: swaths of people were trampled to provide freedom of choice for a select upper class. Today, we seek to destroy that divide, but even the socialist candidate may not be the best one to make such radical change. As a self-proclaimed socialist, a vehement opponent of entrenched power structures that control vast swaths of the federal government, and a career politician, Sanders isn’t the most unifying personality. If he can't win Congress' support for his initiatives—which Clinton, with all her connections and White House experience, is primed to do—his candidacy is worthless.

Cassandra, Liz, and I weren’t able to change each other’s minds; we all held onto our priorities too strongly, as I think we all expected at the outset. But we’d hit upon something essential: none of us liked the Democratic Party as an establishment. "I don't fuck with the Democrats anymore," Liz said, shaking her head in despair at the lack of a viable (or even moderately inspiring) third party. The Democrats are, in a sense, our choices out of desperation. Even if we like aspects of the candidates that seek the approval of the party machine, endorsing any part of that machine chafes. But we’ll grin and bear it for now, if only out of sheer terror at what will happen to us under President Cruz.

And so we raise our glasses as semi-united lefties, divided by the gap between idealism and pragmatic action but forever friends in our determination to stop the march backwards that the GOP demands of us. That night, we reaffirmed the mantra reluctant Democrats all over have been repeating for months, if not years: “Whoever gets nominated, at least they won’t be a lunatic like some other people I could name.”

Then we got drunk, because Jesus Christ, this election is depressing.