Those pursuing intrigue in the Antonin Scalia death should check history. 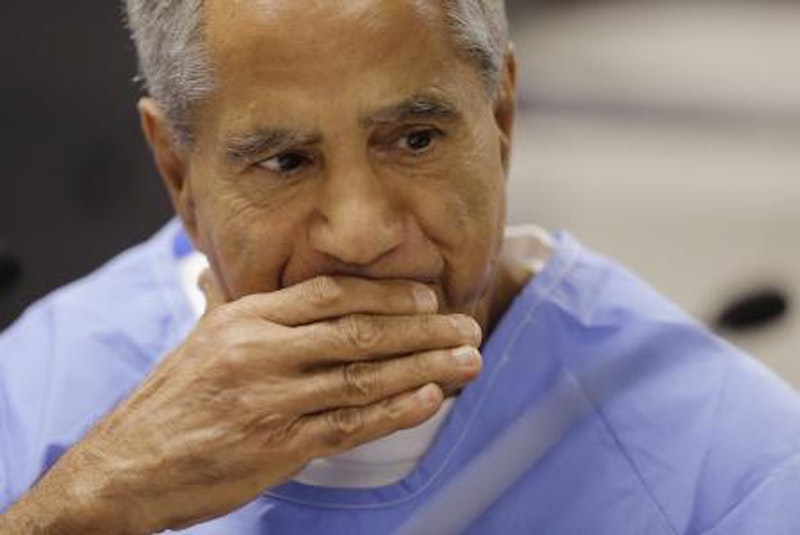 As someone who sleeps with a pillow over his head—to reduce traffic noise from a few floors below—I’ll say this: Something heavier will be required to drown out the elevated clamor from Antonin Scalia murder conspiracists bolting out of American basements this week at record speed toward every camera and microphone they can find.

A friend of Obama’s finding the body; that pillow found over Scalia’s head; a by-telephone legal declaration of death; no autopsy, etc. Some long-lasting conspiracy movements across the country’s history were built on less. But a recent tale shows what the conspiracy end game can look like, years later, when the idiocy wanders about aimlessly for decades hunting for believers, then legitimacy, but ultimately finding neither, expires. And it is a dreadful, senile sight.

Last week, in a state prison in San Diego County, Sirhan Sirhan, Jerusalem-born, Pasadena-raised, sat before the parole board that has denied him freedom 14 times, since his initial sentence of death was commuted in 1972. On June 5, 1968, in front of a dozen witnesses who legally swore they watched him do it, Sirhan shot five people in a Los Angels hotel kitchen. Only one died as a result: Sen. Robert Kennedy, who’d just won the California Democratic presidential primary.

The other shooting victims struggled in ways physical and psychological for years. Among them is Paul Schrade, a union official who was shot in the head. During Sirhan’s hearing last week, Schrade, who is 91, lectured the parole board for a full hour, claiming there was a second shooter, though he said he believed that it was Sirhan’s shots that struck him. Sirhan rambled but stuck to his story: He doesn’t remember anything about some moments that night, but he does clearly remember others, he said. Though over the years, he certainly has remembered, and has admitted shooting Kennedy several times, to investigators and journalists.

A full dive into this is not necessary. Author Dan Moldea, a conspiracy believer for years, took one final look at the case in the 1990s, and to his shock realized he’d been had, not just by Sirhan but by a mini-industry that never quite rivaled that of the one that evolved following the JFK murder, but still was resilient. The RFK case for conspiracy centered on the inferior investigative work of the Los Angeles Police Department, which made numerous errors, and then literally burned a tall stack of evidence. A security guard near Kennedy was claimed by conspiracists to have been a second shooter. Why a second shooter would be necessary in such a narrow space is a mystery. Moldea interviewed the security guard extensively and gave him a polygraph. He passed.

Audio, which conspiracists claim to be of the shooting, miraculously appeared a few years ago, its owners claiming it proved too many shots were fired than could fit into Sirhan’s eight-shot revolver. Moldea and a few others called such claims nonsense, but the tape received plenty of media play. In 1998, I interviewed Bill Eppridge, a photographer working for Life magazine, who was just outside the kitchen when the shooting started. He told me he heard eight shots, "two shots, then six."

One major similarity between the discredited case for conspiracy in the RFK shooting and the arguments of those scrounging for inconsistencies in the non-investigation of the Scalia death: a lack of understanding among Americans of how government bureaucracies work, and don’t work.  This goes to the JFK case as well. Much of what is pointed to by conspiracists in both Kennedy assassination cases is legitimate evidence of cover-up. By government bureaucracies. Of their own failures. Or of their own intentions to pursue motives banal or otherwise having nothing at all to do with protecting the truth about the true killers. Evidence tampering is obviously a serious crime. The JFK case is full of it. But no researcher in either Kennedy case has connected such evidence to a plausible, complete narrative that proves a murder conspiracy. With witnesses and evidence on a serious scale of believability. That can convince other than those living in the basement, metaphorically or otherwise.

The sum of the decisions in the immediate aftermath of the Scalia death seem to add up to what political consultants call bad optics: something is bad because it looks bad. And for that reason only. In this case, local officials who have zero interest in doing anything other than their jobs. Somebody died? I don’t need to actually drive all the way out there. Just hand me the phone. Sound like a conspiracy? A more reliable explanation: sounds ridiculous. Sounds bizarre. Sounds like bureaucracy.

After three hours, the board ruled against Sirhan’s request for parole. He’ll be back in five years. Conspiracy believers in the RFK murder are exhausted, frustrated their cause never caught fire. But there are those who hang on. And on. As Sirhan was led away, the AP reported Schrade shouted at him, "Sirhan, I'm so sorry this is happening to you. It's my fault." Though an official intervened, Sirhan reached out and attempted to shake hands with Schrade. Of course he did.