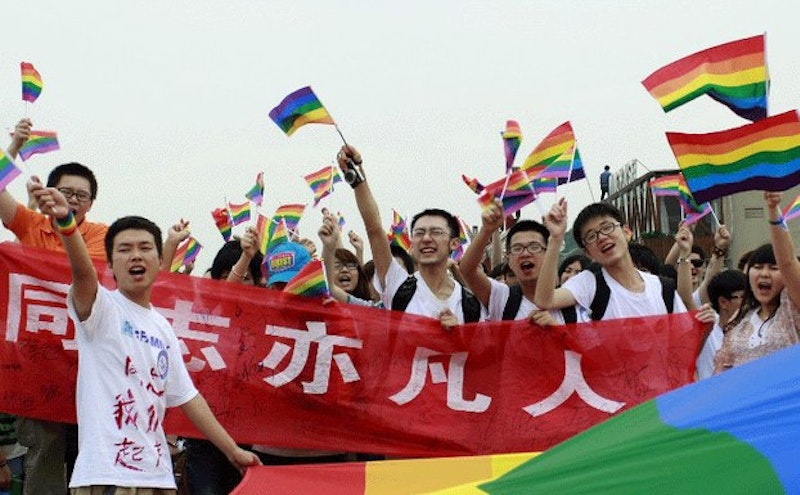 According to Brendon Hong of The Daily Beast, last week Chinese social media platform Sina Weibo reversed its decision to ban the hashtag #IAmGay from its site after worldwide condemnation. The hashtag ban was part of Sina Weibo’s plan to remove “illegal content” from the site, which included “videos with pornographic implications, promoting violence or (related to) homosexuality.” LGBTQ people and allies in China responded to the ban by using the hashtag even more, until finally Sina Weibo realized this was a battle they couldn’t win. What’s interesting to note is that, according to Hong, while China never outright outlawed homosexuality (except from 1979 to 1997 when it was “indirectly criminalized” under a law that lumped together with sexual assault), the existence of LGBTQ people is still virtually erased throughout the nation.

According to The Japan Times, Chinese government censors forbade depictions of LGBTQ characters from television in effort to clean the airwaves from “abnormal sexual relationships and behaviors, such as incest, same-sex relationships, sexual perversion, sexual assault, sexual abuse, sexual violence, and so on.” The ban extended beyond television to include rejecting Call Me By Your Name from the Beijing International Film Festival and editing out all gay references in the movie Looking for Rohmer. The Japan Times also reports there’s no reference to LGBTQ issues in sexual education, conversion therapy is practiced in several clinics, and same-sex marriage is illegal.

As pride month draws closer, it’s important to remember the fight for LGBTQ rights still goes on not just in the United States, but also worldwide. That’s not to say that we LGBTQ people in the States need to stop complaining because other people have it worse, like what a lot of Twitter trolls say. Instead, I call upon my LGBTQ comrades around the world to lock arms and continue to fight for each other’s liberation. The opposition is strong, but we are stronger, and we’ll never give up the fight.