The Trashing of the State Department

What hath Trump (and Tillerson) wrought? 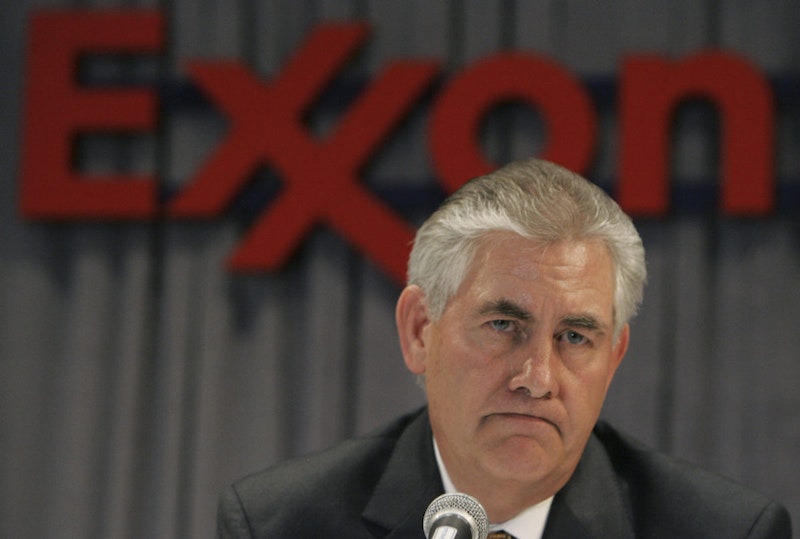 Donald Trump’s planning a summit that will address the fate of the Korean peninsula. But we don’t have an ambassador to South Korea. We don’t have an assistant secretary of state for East Asia. Nor do we have a secretary of state: Rex Tillerson left at the end of March, and Mike Pompeo is causing dubiety among the senators. Trump and John Bolton will just have to see what they can do. This suits them fine but scares the rest of us.

Korea is where trouble hit first, but we’re patchy all over, as the Partnership for Public Service indicates. The U.S. has no assistant secretary of state for the Middle East, Africa, or South Asia. We have no ambassador to Egypt, Saudi Arabia, or Germany. A country can survive with a State Department like this, just as a person can survive without health insurance. I borrow the analogy from a professor who talked with Vox. The professor added, “Your life is probably fine—up until the point you get sick.” Which brings us back to Trump.

A fancy arguer might maintain that diplomats get in the way. Trump storms past the establishment to bring his brand of justice to world affairs. If Kim falls over, then every State Department should be as dilapidated as this one. Or so the argument would go. Those of us who are more timid would say that safety belts and health insurance are there because they’re useful, and it’s the same with State Departments. Honestly, didn’t you assume we had an ambassador to Germany? Part of stability in government is that you don’t have to think about this.

Tillerson himself saw the echoing hallways as a problem. While still secretary, he told Ronan Farrow the unfilled jobs were “a point of concern… It’s not something I’m happy about.” But the White House kept grinding its gears and wouldn’t let appointments move forward, he said. Farrow wrote up the interview in a New Yorker piece excerpted from his new book. He describes a State Department that’s bereft and seething. “The building was being run almost entirely by deputies,” the piece says, and we hear of a Foreign Service officer who muttered, “You don’t fucking know us” as Tillerson droned.

Even Trump didn’t like Tillerson. “You just can’t be an arrogant alpha male all the time with Trump,” says a “source close to the White House.” The source says Tillerson gave Trump lectures about Middle East basics—“I mean, honestly, condescending.” Or, as the article paraphrases, “Tillerson’s Texas swagger… irked Trump.” This Texas business is a stretch, since anyone can be condescending about geopolitics. Making a similar mistake, The Washington Post refers to Tillerson’s “Texas drawl, real as barbed wire from a man who was named after two 1950s Western movie stars, Rex Allen and John Wayne.” Real as barbed wire and named after cowboy stars—these things don’t go together. By the time Tillerson came along, the frontier was over.

The Post says Tillerson was a Trump central casting hire. That is, Tillerson looked right, so Trump hired him, and afterward the boss marveled that his boy “was straight from central casting.” To the extent that Trump saw a cowboy in Tillerson, Tillerson was portraying a cliché. Farrow’s piece notes Tillerson’s horseshoe-patterned tie and Wild West paintings. “He got compared to a cowboy a lot, and, between the décor and the horseshoes, he appeared to be leaning into it,” the piece says. Strip away these atmospherics and we have a situation that isn’t especially Texan but instead very baby boom. One reads that Tillerson governed ExxonMobil from an office suite called the God Pod. He arrived at State determined to cut the department into a new shape, one with many fewer jobs. The Trump administration wanted a 29 percent cut in the department’s budget, a demand that didn’t bother Tillerson at all. But he had his plans too. In his first month, Tillerson “sacked several senior career diplomats without naming their successors,” Foreign Policy says, and it tells of folded cubicles stacked outside Tillerson’s office as he brought in his consultant army.

George Shultz, a corporate master from an earlier time, served six and a half years as Ronald Reagan’s secretary of state. He’s not sure how much of the State devastation is Trump and how much is Tillerson. Either way he’s baffled. “You don’t start out with the idea that you’re going to cut everything before you even know what’s going on,” he tells Farrow. Trump, as slasher, presumably didn’t consult corporate experts; he wanted State beaten up because he’s a Fox viewer. Tillerson’s a different case. He had big doings in mind, the creation of a leaner, meaner, etc. But he was just as foolish and destructive, and as self-involved—Trump bombards the world with communication, Tillerson played diva by communicating with no one. Off in his transplanted God Pod, Tillerson planned the State Department’s fate while waving off long-time diplomats and ignoring foreign governments (no calls to anyone after missile strikes on Syria in 2017).

Here we see the baby boom vices of egotism and disruption working their way by opposite channels toward the same victim. Trump, the populist entertainer and TV viewer, and Tillerson, the corporate overlord in love of revamping, both decided to make hay at the State Department. This was in the interest of dynamism, and we’ll see how dynamic things get in Korea.