Democrats Blame the NRA For Everything 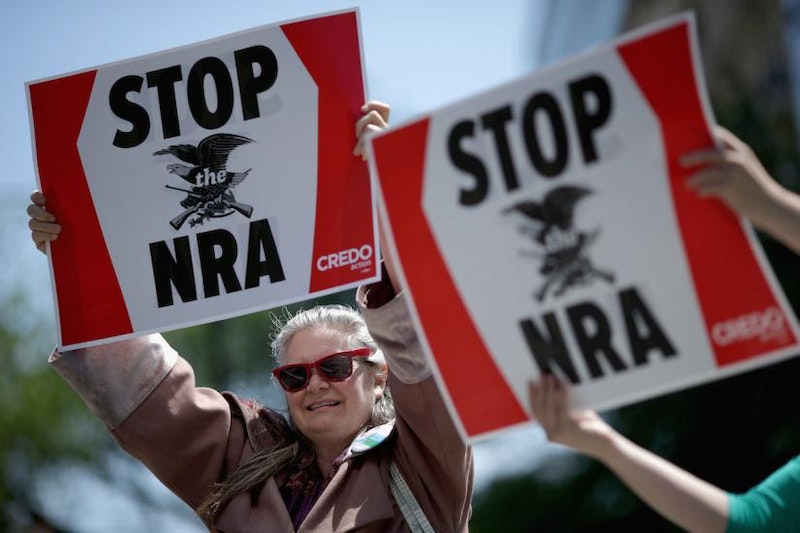 At CNN’s “town hall” following the massacre of 17 in a Florida high school in February, Sen. Marco Rubio (R-FL) was a punching bag for enraged anti-gunners. The crowd booed when he refused to promise he’d never take another cent of the NRA’s blood money. At a massive gun control protest in the nation's capital in March, teen anti-gun activist David Hogg accused Rubio of valuing children's lives at $1.05. Florida Gov. Rick Scott refused to attend the CNN event, and has made no overtures for compromise as Rubio has, but Hogg didn't mention his name.

Treating Rubio as an NRA stooge with adolescent blood on his hands may have provided cheap satisfaction to many, but it's emblematic of the Democrats’ continuing impotence at fixing the gun deaths problem. Only political rookies think it's smart to viciously attack one of the few Republicans who’s shown a willingness to reach across the aisle, and only the naive believe that the Senator would change his Second Amendment views without NRA money greasing his palms or that NRA money got him elected.

There's no chance of reducing gun deaths without the Democrats coming up with a better bipartisan approach, even when they've controlled all three branches of government. The latest iteration of their anti-gun crusade, the emotion-driven #NeverAgain movement, is destined to peter out because Democrat emotions against guns aren't sufficient to counter Republican emotional attachment to guns, proven repeatedly since the Columbine High School massacre in 1999. The gunners are anti-gunners’ “deplorables”—they’re just country-fried shit-kickers who don’t care how many kids get shot as long as they can have their weapons of war as playthings. Lecturing the law-abiding gun owners after each mass shooting just brings more of them out to the polls in the next election to vote Republican, and they cycle begins again.

Blaming the NRA for every gun-related death in the nation is more Democratic scapegoating, like saying Putin made Hillary Clinton lose. The NRA’s the Democrats’ “Rothschilds”—almost powerful enough to control the weather, even though its cash is a small fraction of the donations going into the hands of GOP lawmakers. The loathed First-Amendment-loving outfit’s not even among the top 50 lobbying spenders in Washington, D.C. When one of the two major parties in the U.S. is consistently thwarted by a single gun-rights organization, then that party must take some of the blame for all the gun deaths.

One conceptual error the Democrats are making is to frame the entire issue as one of tightening gun regulation, when it's actually about reducing gun-related casualties. Short of repealing the Second Amendment and confiscating all guns, gun control cannot accomplish the task alone. Systems must be strengthened so that nobody can slip through the cracks and buy a gun illicitly, and when dangerous people get guns, then there must be checks in place to prevent them from using them as murder weapons. The government failed on several levels in Parkland, but the Democrats were deaf to those warning bells because of Marco Rubio and the NRA got all the attention.

Anti-gunners like to scoff at gunners belittling their knowledge of firearms, but they still need to do more homework. Without mastery of the subject matter, addressing it’s effectively impossible, and there’s very little mastery on the Democratic side. Democrats talking about banning all semi-automatic weapons often think they're just referring only to AR-15-style rifles when, in fact, about half of all handguns in the U.S. are semi-automatic weapons. They wrongly call suppressors “silencers,” and misunderstand why they're used.

The media’s of little help in educating them, as it’s comprised of urban-dwellers whose hatred of guns, like their hatred for Trump, is powerful. They anthropomorphize an inanimate object by believing guns alone can kill people, and then they’re so disgusted by that object that they refuse to learn anything about it. Perversely, given the importance of the issue, it’s a badge of honor among anti-gunners not to know much of anything about guns.

Democrats are often more concerned with being “right” than getting anything done. They can’t understand the emotions and motivations of their political adversaries, so they can’t defeat or work with them. The result is a constant standstill. Some of them think they’ll ride this great post-Parkland wave all the way to the repeal of the Second Amendment, but that’s a pipedream, as it requires a two-thirds pro-repeal vote in both the House and the Senate and then ratification by three-fourths of the states.

You can’t wait until the next mass shooting to put the same strategy into effect once again because this time the American people will finally have had enough. And when that fails, as it always does, just sit back and wait for the next one and try it all over again. You might think that because this time there are teenagers leading the charge that it gives your side the moral authority it needs to finally get that heavy ball rolling, but this game’s way more complicated than you realize. That will become obvious soon enough.