Prof. Randa Jarrar, who hopes all Bush family members die soon, is a victim of bigotry. 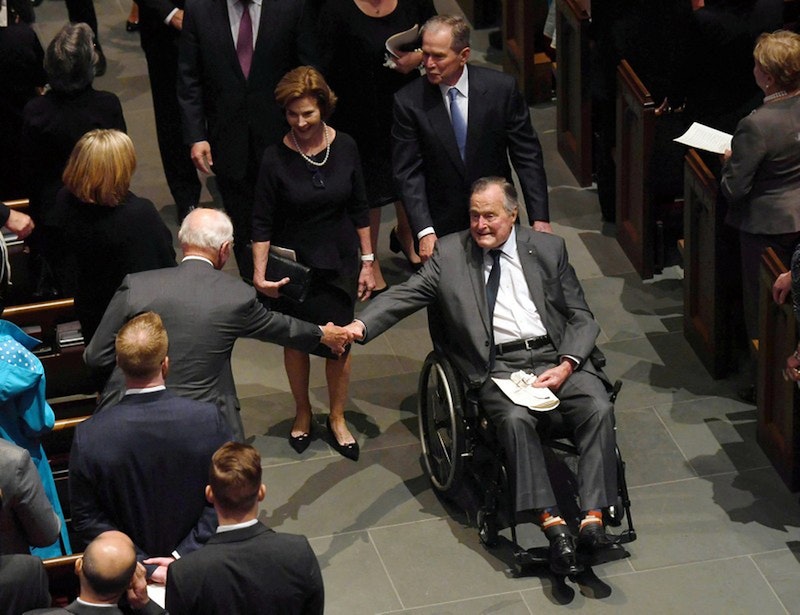 Randa Jarrar, English professor at California State University, Fresno reacted on Twitter to the news that Barbara Bush had died by stating that the former First Lady “was a generous and smart and amazing racist who, along with her husband, raised a war criminal.” “Fuck outta here with your nice words,” she added.

Even an avid crusader against racism and warmongering might find it difficult to put such a brutal epitaph into perspective. Fortunately, Vox is there to explain things, or so the braintrust inside that media outlet's Manhattan offices assures all the liberal ham-and-eggers who are too busy to think for themselves. The Vox website explicitly states that its mission is simple: “Explain the news.”

Vox pieces read as if they’re the product of entering a phrase into a modern progressive essay generator and then tinkering around the edges to fill in some details. For the one clarifying the Jarrar situation, that phrase would’ve been something like: “Muslim woman of color calls powerful white Christian woman a racist and gets viciously attacked by bigots.” The gist of Anna North’s argument is that the professor’s getting pounded solely on the basis of her gender, race, and religion.

Anna North’s first sentence spells it out: “Randa Jarrar’s case is a reminder that when a woman of color speaks out on her views about race, she faces unique dangers.” “Speaking out” about race, in this case, meant Jarrar tweeting that she was “happy the witch is dead” and couldn't wait for the rest of the Bush family to die. And after the English professor had merely denounced racism, North writes, one Twitter meanie called her a bitch and said she should be fired.

The author’s line of reasoning requires the reader to believe that if a liberal, white, male professor—the archetype of privilege—had wished death upon an entire opposition clan and comported himself like he was dancing on a dead person's fresh grave, then conservatives would’ve given him a break. Vox readers are such a malleable bunch.

North informs her readers that Jarrar received death threats (certainly anonymous) after her unkind words, as if that has the slightest meaning on the Internet at this point in time, and as if left-wingers don't offer death threats in equal proportion when someone on the wrong side of history upsets their sensibilities. The writer fails to spell out how Jarrar being a brown Muslim woman has anything to do with the attendant conservative outrage because she’s operating in one of Vox’s explanation-free zones. Vox assumes that its readers are sufficiently woke to make the connection without requiring actual evidence.

While it must be a time-saver for Vox writers to know they can dispense with such formalities as having to back up their theories, the shortcut approach delivers shoddy results. North, employing verbal sleight-of-hand, writes that when men challenge political correctness they're called brave, but when a Muslim woman criticizes racism she gets personally harassed and hounded by the media. In fact, when men do such things, Vox and progressives in general are quick to suggest that they’re racists and/or bigots.

Jarrar knows how to play the victim card that’s now such a vital part of the progressive playbook. After conservatives attacked her, she tweeted about the sexist slurs and racist remarks she’d received. While it’s unfortunate that this happened, those epithets were only one aspect of the criticism she’d received. Jarrar chose not to address that, and Vox doesn’t think it’s worth mentioning.

University president Joseph Castro has made statements indicating that Jarrar, who has tenure, could lose her job over her incendiary remarks. The one thing this Vox piece gets right is that she should be free to express her offensive opinions. There’s no free expression without the freedom to offend. If the professor’s to be officially punished for anything, it should be for posting the phone number of an Arizona State mental-health hotline and telling the aggrieved to contact her there, causing calls to spike from about five per week to around 60 per hour.

What goes on in Vox readers’ minds when they know about this and see that Anna North didn’t include it in her piece because it might suggest that the alleged victim acted dishonorably? That doesn’t fit into the Vox universe, where everything comes down to race, gender, skin color, and religion, so it doesn’t make it into the story. The Vox website states that its goal is “to move people from curiosity to understanding,” but it’s hard to imagine this happening when it treats its readers like dupes.