Charles C. W. Cooke Thinks the Joke’s on the Left

The conservative pundit makes a fool of himself. 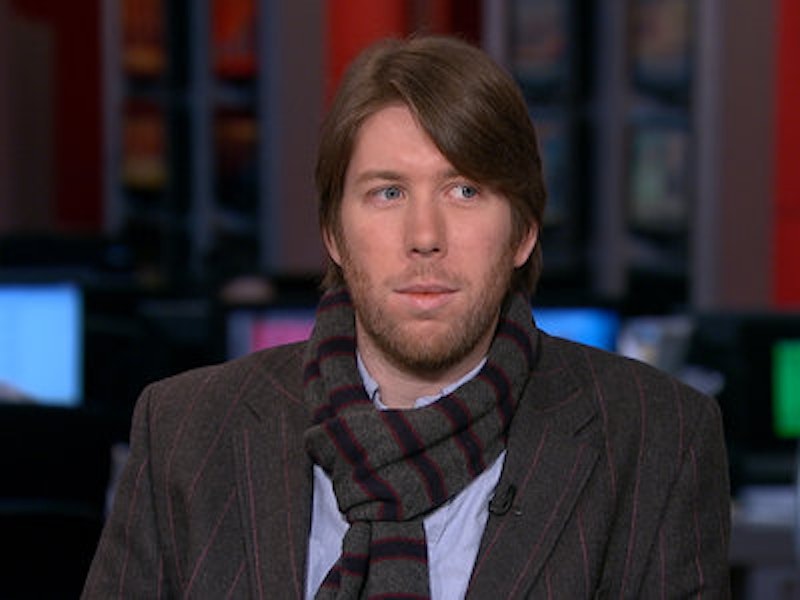 Political correctness is destroying the left! That's been the constant buzz over the last week or so, and Charles C.W. Cooke at National Review is pleased. You can hear him chortling and snorting as he watches the spectacle of all those socialists telling all those Marxists that they suck. "It is enormous fun for conservatives to write long essays that rail against and mock the scourge of 'political correctness,' and yet, as I am coming to learn, it is also a monumental waste of our time." He can't restrain himself though—he goes right ahead and writes that long (or at least medium-sized) essay.

The impulse is understandable. Cooke is getting the same joy in watching the left as lefty commenters do from watching Sarah Palin or Donald Trump thrash and bellow upon the national stage. But no sooner is that comparison made than Cooke is himself furiously and sizzlingly de-pantsed. Because the conceit of Cooke's essay, the whole vim of it, is that his enemies are sillier and more hapless than he is.

As a genuine “liberal” in the classical sense of the word, I’ve no particular objections if people wish to descend into surrealism and intolerance. But I’m under no obligation to indulge them either. Rather, I think that the best way of responding to somebody who tells you that they are “offended” is to first ask, “So what?” and then “Go and do something else."

Cooke is the reasonable man, the heir of the tradition of logic and empiricism, boldly telling off the silly gits who swarm about him, prattling about identity politics and nonsense. Which is fine until you remember that Cooke's party nominated Palin in 2008 to the second highest office in the land, a woman who’s now a white trash vaudeville performer. That same party has repeatedly opened the clown-car door to allow an aging reality star to play at being a billionaire at the expense of actual candidates. You can bark and sneer at the left all you want, but they're at least able to separate the complete charlatans from the actual party actors in a consistent manner.

And Cooke's essay explains precisely why they're able to do that, and his party is not. Part of Cooke's ire and ridicule is directed at the fact that anyone on the left is willing to put up with serious disagreements and arguments. He wonders aloud why Freddie deBoer bothers to deal with classroom situations in which people get attacked for using the word "disabled," or in which there are knock-down arguments about what Cooke sees as trivialities. "Why, one has to ask, does deBoer tolerate it?" he asks smugly.

The answer isn't that hard. DeBoer tolerates it because he's committed to social change. That means that he occasionally has to form coalitions with people who are unlike him, or with whom he doesn't agree. That's how politics work, and it's why politics is a messy, hard slog.

It's understandable that Cooke might not want to personally put in the work to form political coalitions. But Cooke doesn't understand why anyone would bother to do it. He’s a political writer who appears to have no grasp on politics. His idea of free speech is to declare that he won’t bother to listen to anyone who disagrees with him strongly, and that he can think of no reason why anyone would want to. Whose straits are more dire, do you think, the political movement which has disagreements, but is committed to confronting them and working towards its goals anyway, or the political movement that sees dissent as a reason to just chuck the effort to accomplish anything at all? When you've answered that, it's pretty clear why it's the Republicans who have Ted Cruz shutting down the government, and Democrats who were able to come up with an imperfect, but implementable health care plan.

Cooke's too dense to realize what he's saying, though, as he laughs on. He thinks it's funny to sit and cheer the left's troubles, as if the right benefits when the left is a mess. But it doesn't. In a two-party system, you need two healthy parties to govern effectively or wisely, not least because that other party you hate is going to get in office roughly half the time. The Iraq War and the government shutdown weren't good for the left. If the left were really broken, it wouldn't be good for the right either, presuming that the right has some marginal interest in the health of the country. Cooke's essay is one more indication that significant segments of the right are more interested in grandstanding self-congratulation than in actual politics—a state of affairs which would be easy to laugh at if it weren't both chilling and sad.