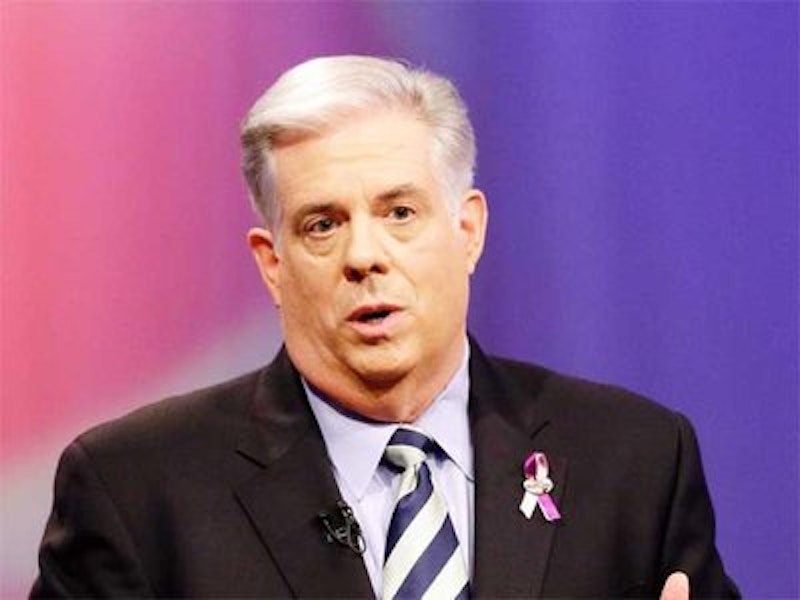 The word “mandate,” with all of its magisterial intimidation and threatening connotations, has joined the lexicon of epithets right up there with the saltiest drunken sailor expletives, X-rated vulgarian bluster and a Block bouncer’s salacious bark. Mandate. It’s become a profane word, uttered with an almost apoplectic, disrespectful and totally unapologetic hiss.

Receiving a mandate (or a formula) is a blessing; paying for them, as taxpayers do, is a curse. But mandate, like it or not, is the entangling feature of the current budget debate, and wonder of wonders, with all of the executive’s awesome power, there’s little, if anything, that the governor can do about them except try to untie the problematic knot. Mandates, by Constitutional Amendment, are legislative dictates that must be obeyed to the dollar.

The protocol standoff between the novice administration Gov. Larry Hogan (R) and Warren Descheneaux, director of the non-partisan Office of Policy Analysis and one of the most respected voices on fiscal policy in Annapolis, reprises the debate of a dozen years ago with another Republican governor and one that Hogan has seen and heard before. Robert Ehrlich Jr., then governor and Hogan’s boss, tried to white out mandates and formulas just as Hogan is attempting now. The Office of Policy Analysis functions in Maryland in the same the Congressional Budget Office does in Washington.

Hogan is trying to wipe out an $800 million shortfall with a series of budget cuts and long-term formula adjustments. Many government formulas are opposed by ruralists and Republicans and favored by urban and suburban Democrats. To start the moneyball rolling, Hogan has proposed a two percent, or $112 million, across the board cut in agency spending which Descheneaux has characterized as “a very dangerous, in my estimation, approach to budgeting… It doesn’t let you see what you’re doing.” Descheneaux has also suggested that Hogan is employing the same budget gimmicks he campaigned against.

And the Legislative Black Caucus, with the critical support of legislative leaders, is upset and threatening reprisals over the proposed downward formula adjustments, especially the massive formula reductions in education, nearly $139 million, that would fall disproportionately hard on Baltimore City and Prince George’s County, the state’s two black population centers. But Hogan is trying, at least, to enforce campaign promises to ease the way for his major pledge of tax rollbacks. Here’s another hint: Hogan wants to expand charter schools which would no doubt come at the expense of public schools.

There have always been special government funds of one kind or another. For example, the unified transportation fund underwrites Maryland’s transportation network—its veins of roads and highways, two subway systems, the Baltimore bus system, the Port of Baltimore and the MARC rail system. And transfer taxes are set aside for land preservation (and legalized theft when revenues fall short and the budget needs balancing.) Hogan has borrowed heavily from the Open Spaces fund, a sleight-of-hand for which he criticized former Gov. Martin O’Malley (D).

History books (and Google) are vague and meandering about the origin of mandates. But the hunch is that they seriously entered the system during Franklin D. Roosevelt’s presidency with entitlement programs such as Social Security. And they intensified under Eisenhower with road-building (gasoline) taxes and reached their apogee during the Great Society years of Lyndon Johnson.

In the 1960s, the federal government was sending gobs of money to the states for social welfare programs (school lunches, job training, etc.). But Southern states, realizing a cash cow, were applying the money to such projects as building roads and prisons instead of feeding hungry (black) children. Enough, said the federal government, and mandates were stipulated through categorical grants, as opposed to the much abused bloc grants.

Gradually mandates made their way to the states because much of the federal largesse being shipped from Washington required them. Now, for good or ill, Maryland is stuck with them as a fact of government life and program dependency.

Here in Maryland, in the late 1970s, the General Assembly began treading on executive prerogatives, a tetchy adventure, at best, that lingers to this day. As every political hobbyist knows, Maryland has the strongest executive budget system in the nation. The General Assembly can cut the budget but not increase it. Nor can it shift money among programs. Be grateful for small blessings.

Back in those bad old days, the legislature, feeling its oats, assumed that it could direct the governor to spend dedicated amounts of dollars on specific programs of its designation. In other words, the General Assembly could mandate—order—programs and money.

A test case went directly to the Maryland Court of Appeals, but backfired. The court ruled that the legislature lacked the constitutional authority to mandate programs because of the doctrine of separation of powers.

That same year, the voters of Maryland approved the amendment that gave the legislature the authority to direct the governor, through program mandates, formulas and dedicated funds, which programs must be funded and how much money he must provide. To tie the knot even tighter, the governor has absolutely no discretion or flexibility over mandated, or dedicated, funds. He must follow the direction of the legislature.

So stop bellyaching, folks, you did it to yourselves.

Today, as a result of the 1978 action by the legislature and the voters, fully 81 percent of the state general fund portion of the budget—about $16.5 billion—is mandated and must be funded up to the level prescribed by the legislature. The only way to undo the mandates is to repeal laws (programs) that require them and reenact them with lower mandates or revised formulas. That is exactly what Hogan is trying to do to wipe out an $800 million shortfall now and to avoid chronic structural deficits later.

There are basically three categories of mandated appropriations in the Maryland State Budget, according to a tutorial assembled by Descheneaux’s office:

1.“Mandated Amounts/Entitlements: General or special funds that have a statutory or constitutional requirement that designates a specific amount be appropriated or a specific formula be used to calculate the appropriation, or that are required payments through an entitlement.

2.“Funds with Mandated Purposes. Special and higher education funds that have statutory dedications identifying a broad purposed for the funds but which allow the governor discretion as to how the funds are allocated and used.

3.“Non-Mandated General Funds: Funds that allow the governor substantial flexibility as to the administration and funding levels of the programs with which they are associated. In many cases, state law requires expenditures for these programs without specifically mandating the amount or purpose.”

Federal programs affecting the states come in two flavors—funded (money is provided for a program or directive) and unfunded (the federal government tells the states what to do but does not provide the money, i.e., the rain tax.) This catchpenny formula works at the state level as well: The state tells the counties what to do without providing funds, i.e., kindergartens.

The following are examples of mandated funds from an earlier syllabus also prepared by the Office of Policy Analysis:

So anyone who talks about removing mandates (and formulas) to get rid of programs or reduce spending to balance the budget had better take another careful look. Pretty much the entire budget is under legislature mandate, for one peculiar reason or pet project or another. And there’s very little the governor can do about it, though he’s trying. The budget is the first major policy showdown between the new Republican administration and the legislature’s old Democratic leaders.