Hobby Lobby has more rights than you. 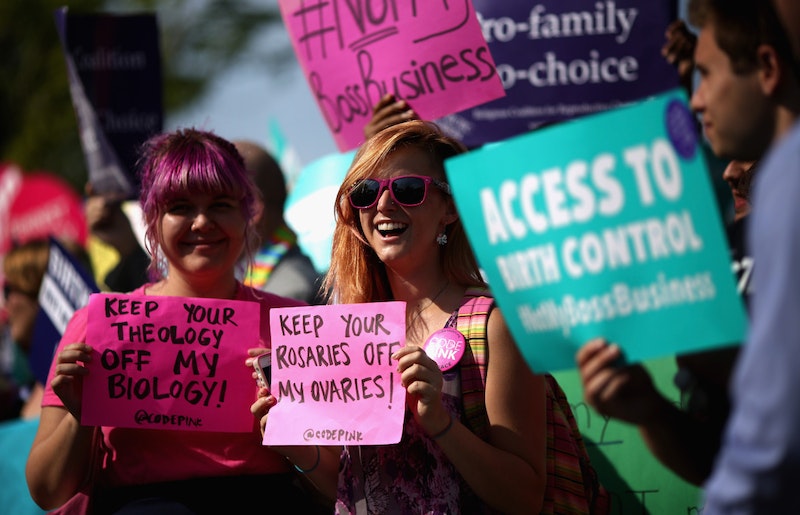 In the Supreme Court ruling of Burwell v. Hobby Lobby issued on June 30, the Court initially ruled that Hobby Lobby, and their fellow plaintiffs, could withhold coverage of intra-uterine devices and emergency contraception from their employees’ healthcare coverage under the false belief that these particular contraceptives are the same as abortion. In an unusual move, the Court issued a statement on July 1, clarifying that its decision can be applied to all contraception. The final decision is that one’s closely-held, for-profit employer has a right to religious freedom that trumps a woman’s right to basic healthcare. Even if the female employees in question aren’t of the same denomination as their employer.

This decision could very well be the most brazen act of court-sanctioned discrimination since Plessy v. Ferguson enabled the Jim Crow South with the idea of “separate but equal.” While much of the discussion has centered on a woman’s right to not be pregnant when she doesn’t want to be, what continues to remain overlooked is the impact this will have on women who need hormonal contraception for medicinal purposes. What’s also disturbing is that in addition to those who use contraception as medicine, rape victims who need emergency contraception could also be denied coverage.

In a 2011 interview, Justice Antonin Scalia described the lack of constitutional equal rights for women. He said that the equal rights clause in the 14th Amendment has been used at the discretion of the courts as a kind of de facto Equal Rights Amendment, but ultimately, there’s nothing in the Constitution that explicitly forbids discrimination against women. With this in mind, it should come as no surprise that Scalia was among the justices who ruled in favor of Hobby Lobby.

The lingering question is what female workers can do to access contraception when their for-profit employers won’t cover it. In its ruling, the Supreme Court suggested that the government would take up the cost using a method similar to what’s already in place for women who work for religious, non-profit organizations. So there’s a good chance that these women may still get coverage for their contraceptive needs, but they’re going to get more paperwork in the bargain as a trade-off for not being sick.

The ruling has also reopened the debate about making hormonal contraception available without a prescription. I do think it’s an idea worth exploring, especially for generics. When drug companies have to compete against store brands, it will sometimes drive prices down. Also, a woman being able to walk into a store and pay cash for non-prescription medication would also ensure her privacy. The problem then is that for women who are already secure in their contraception coverage, this creates a new cost to them. And for contraceptives that have to be installed by a doctor, like IUDs and Implanon, some women’s coverage would remain only available at the discretion of her employer.

Some of the conundrum about this can already be seen with emergency contraception, which is available over-the-counter for adults. But if a woman were using it in a hospital, then it would presumably be billed to her insurance company or Medicaid. This leads to the conclusion that if a woman is using emergency contraception in a hospital or clinic, it’s very likely she was raped. So to not cover it in this instance is especially cruel.

I have another question in mind as to how far religious discrimination against women can go. There is a law in Arizona that any employer can deny contraceptive access to their employees, but if she needs it for medicinal purposes, she has to open her medical records to her employer. In addition to its breach of doctor-patient confidentiality, the Arizona law also allows employers to terminate employees who use birth control, even if they’re paying for it out-of-pocket for medicinal purposes. I guess employers in Arizona can make up their own rules as they go along as to how they want to pay, or get out of paying, for hormonal contraception. It’s entirely possible that this law, or part of it, may one day be repealed or overturned. But with the Hobby Lobby ruling, this may serve as a blueprint of laws to come. In much the same way abortion is still technically legal in this country, new laws are constantly being introduced to where abortion is being abolished through chronic acts of inconvenience. It’s plausible that contraception may face similar battles.

One of the arguments that I’ve noticed many people have a difficult time swallowing is the idea that an employer denying coverage of contraception on religious grounds is an act of gender discrimination, but as soon as men need to avoid risky pregnancies or need to manage their ovarian cysts, we can have that conversation. The Court does make the distinction that employers will not be permitted grounds for denying coverage of blood transfusions or vaccines, and a few other treatments, on religious grounds. So denying contraceptive coverage really comes down to gender and sex. We’re stuck in this place where discussing women’s sexual health, in a scientific way, is too much like reliving the trials of Galileo. As I mentioned before, the ruling was based on Hobby Lobby’s belief that IUD and emergency contraception use is the same as abortion when they’re not. I hate to get into semantic arguments, but the very word “contraception” means that it acts to prevent conception. It’s also worth noting that there’s nothing in the Affordable Care Act that compels employers to cover abortions, per the Stupak amendment, so Hobby Lobby’s argument was erroneous from the start. But five men on the court took their side anyway. So employers get to pick and choose what hormonal contraception they can cover, while the women who need this treatment don’t get to pick and choose their health concerns.

I’d like to conclude on a lighter note, and a friend wanted me to talk about his health issues. He has a heart condition, and if he were a woman, he’d likely need birth control because pregnancy could likely put a fatal strain on his heart. And if he were a woman, his employer could deny him that coverage. But as a man who might need Viagra or Cialis, because of the same heart condition, he’s totally covered, no questions asked. So there it is, our exercise in 21st century gender discrimination.