Evaluating the Hope and Change 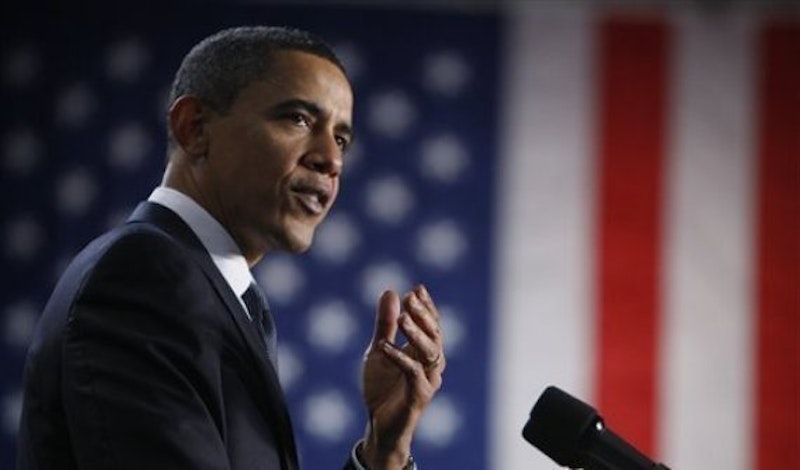 Barack Obama is nothing special. So Jonathan Bernstein argued in a recent post, and he makes a compelling case. Bernstein says Obama isn’t a particularly bad, good or mediocre president. Rather, his point is that Obama’s done pretty much what any Democratic president would have done while in office. According to Bernstein:

And that seems about right. For leftists (like me) Obama's presidency has been disappointing—but that’s because he's acted like a centrist Democrat, rather than the progressive he sounded like on the campaign trail. Even his crappy record on civil liberties, as Bernstein points out, is in line with the crappy record of centrist Democrats on civil liberties (and presidents always tend to be somewhat worse on these issues, because when it's your power you want it.) Similarly, conservatives elaborately freaking out about Obama are just reacting the way they do when centrist Democrats are in office (as they did with Bill Clinton.) There's maybe more of an edge because of the Republican Party's unfortunate, longtime racist paranoia and because of its more recent Fox News derangement, but none of it has much to do with Obama per se.

There are maybe a couple of aspects of Obama's presidency that could be seen as individual or idiosyncratic. First (as Bernstein notes) his administration has been remarkably scandal free. Republicans can squawk and blubber about Benghazi or the IRS audits, but the simple truth is that (so far) Obama's administration has not had a personal mess like Monica Lewinsky, nor an instance of deliberate, massive lying to the American people like Bush 2's WMD debacle, or Reagan/Bush 1's Iran-Contra. We know that John Edwards wouldn't have managed that if he'd been elected, and Hillary Clinton's record of various sleazy dealings suggests that there's a good chance that she wouldn't have been able to either. Indeed, part of the reason it's so easy to see Obama as a generic Democrat is that he hasn't defined his administration by an individual mass of corruption or mendacity, as presidents frequently do.

The other way in which Obama might be seen as not entirely generic is foreign policy. It's true that his actions have been broadly in line with Democratic priorities, but I think that, in 2008, there was at least a question of exactly what those Democratic priorities were. It's somewhat easy to forget, especially since Hillary Clinton became Obama's Secretary of State, but the 2008 Democratic primary was defined in large part by foreign policy differences. Clinton refused to disavow her Iraq War vote; Obama was in a position to challenge her because he was against the war.

Would Clinton's foreign policy have been more hawkish in practice? We can't know that. But it's definitely the case that Obama has shown more restraint than you would have expected in a generic Democratic president before 2008. He's (slowly, but still) wound down the wars in Iraq and Afghanistan. He decided, after some vacillating, not to get the U.S. involved in the Syria disaster. He did get the U.S. involved in Libya, and he shouldn't have, but even there the commitment was quite limited. There was remarkably little saber rattling when Putin invaded Ukraine; there's been a remarkably low-key response as Iraq has descended into (more) chaos.

When I voted for Obama initially I told myself that all I really wanted out of his presidency was for us to not invade Iran. It's a low bar, but give him his due, he's cleared it. A generic Democratic president with no real scandals and a slightly less hawkish foreign policy—it's not exactly hope and change, but it could be worse.