Trapped by His Own Eyebrows

A portrait of Mitt Romney, the would-be president who looks like he has a sexual dysfunction. 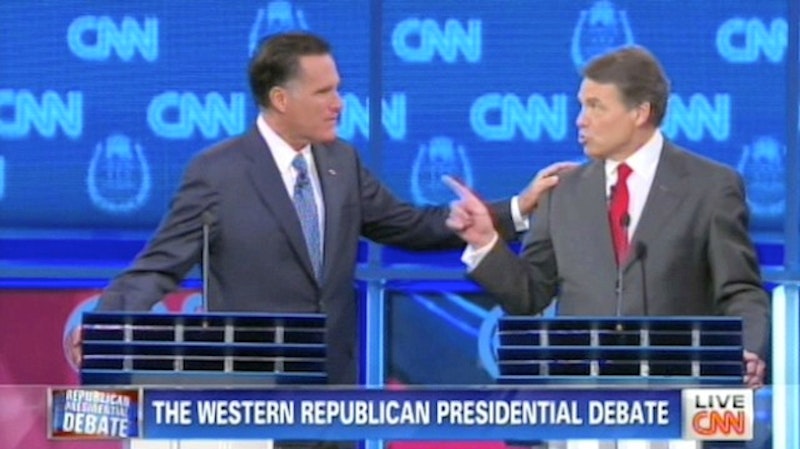 Mitt Romney isn’t disgusting, just flimsy and ill at ease. Attacking or bantering or attempting to command, he’s going though the motions and hoping that he gets it right. You feel anxious for him. Romney spends every day the way we spend the 40 minutes we’re trapped at an office party or the five hours we’re stuck at a Thanksgiving where it’s all in-laws. Of course, Romney chooses to do so, which is creepy in a faint, subliminal way. But watch him on screen and he doesn’t appall you the way a Nixon does. He just seems beleaguered.

He has tiny hazel eyes pinned beneath heavyweight eyebrows, and the eyebrows are set against a forehead that looks like a drive-in movie screen. Forehead and brows conspire to oversell anything that comes out of Romney’s mouth. There’s nothing he can do about it. The apparatus makes him look like he’s punching out a point, and then you look down at his meager lips and eyes and find they’re doing not much at all. Romney is a big fellow, with shoulders, and he managed to grab $200 million or so as various opportunities presented themselves. Atop him you’ll find a Vitalised grillwork of hair, a personal system of steel-gray buttresses for his temples and brow; it looks like the executive class version of a fireman’s helmet. He should be an impressive man. But beneath the money, the shoulders, the hair, and the eyebrows there’s just Romney, and he always looks like he’s flinching. See him on a talk show and you start to wonder if his chair is wired. Maybe he gets a shock if he makes a wrong move; that’s why he’s so careful to keep his eyes on Letterman.

At the last Republican debate, Romney fell into a few spats with Rick Perry, who’s supposed to be the hard dog of the current GOP pack. Perry kept interrupting and perhaps Romney wanted to show who was president. So he swung back, but the moment turned into something his supporters had to explain away. Romney reached over to Perry’s podium and put his hand on the man’s shoulder. By TV debate standards, that’s aggressive. But no one said Perry had been diminished. Instead pundits said Romney came across as “frantic,” “patronizing,” “rattled.” Aggression has to be carried out with authority, by someone who knows he can remake the rules. Otherwise you generate embarrassment, the sort of moment where chagrined college boys rebuke each other by muttering “Not cool.” Romney’s shoulder grab was a “not cool” moment because, socially, he has no authority. He doesn’t make rules, he clings to them. “I get 60 seconds and then you get 30 seconds to respond,” he told Perry, and this was followed by a “Right? Anderson?” because the only rules enforcer on hand was Anderson Cooper, the TV personality.

Romney’s public behavior comes down to this: He’s doing what he thinks we want so we’ll let him off the spot. If we let him off the spot enough times, he can go on and become president. What a miserable deal to make for yourself. The pain shows in his face. Romney can’t stop smiling—because smiling is required—but neither can he get it together to show his teeth. Sometimes, while an opponent talks, he manages a one-corner-up smirk, which at least is a statement. But more often he has the look of someone trying to keep up with the in-jokes of people he doesn’t know all that well and who probably don’t like him.

Obviously, he cries out for some sort of stigmatizing personal attack, the kind of thing that the Republicans practiced so well upon Al Gore and John Kerry. But Democrats are klutzes at the personal. “Weird” was the term allegedly peddled by Obama’s campaign people when they talked to a reporter about Romney a couple of months ago. The word choice caused enough of a stink that David Axelrod, Obama’s top campaign expert, had to publicly slap it down.

On the one hand, of course, nobody would ever definitely say that Romney is not weird. On the other hand, calling him weird releases none of the “at last it’s been said” feeling that buys cover for a really mean personal attack. If Democrats were more artful at dicing up personalities, they might settle on some phrase like “He just seems off” or “I don’t know, it’s like he isn’t in synch.” But even better would be to zero in on Romney’s precise zone of weakness, the thing that bothers people but they can’t put their finger on it. The pained semi-smile, the imposing heft that turns out to be all vacuum, the manly man who seems like he wants to hide.

Mitt Romney has the vibe of a premature ejaculator, and whoever figures out how to say so and get away with it will end his political career.