Mounting police brutality and the Congressional Budget Office's report reinforcing the increasing income disparity gap have given protestors an opportunity to solidify their strategy. 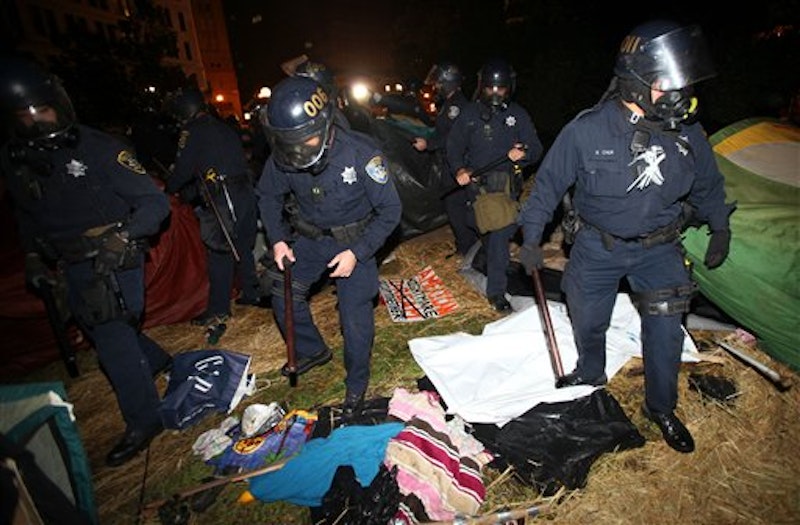 The Occupy Wall Street demonstrations just got two fresh jolts: Police brutality and the Congressional Budget Office report showing a great disparity in income growth in America. All they have to do now is figure out how to translate the two unrelated events into a national strategy. Nothing will galvanize the movement like cops out of control. It was police mayhem in Chicago in 1968—dubbed a “police riot” by the Kerner Commission—and the shooting of students at Kent State University in 1970, called a “massacre,” when Ohio National Guardsmen fired 67 rounds at protesting students, killing four and wounding nine, that solidified the anti-war movement and accelerated the U.S. withdrawal from Vietnam. The actions of the Chicago police and the Ohio guardsmen flashed across America’s television screens and enraged parents around the country as they watched the youthful demonstrators being beaten and shot by those who are sworn to protect citizens against harm. The anti-war movement eventually bridged the generation gap, bringing together hard-hatted fathers and hard-headed sons into common cause against Washington. For police, the widespread anti-Wall Street demonstrations are a test of nerves as well as a public relations nightmare.

The latest episodes of police violence against demonstrators occurred simultaneously in Oakland, New York and Atlanta on the same day that the CBO released a study showing that the earnings of America’s top one percent grew 275 percent from 1979 to 2007 while the income of those at the bottom of the pay scale saw only an 18 percent increase in their paychecks over the same period. The disparity in income, along with other economic issues, is one of the main themes the protesters are accusing Wall Street of advancing. Their syllabus of complaints, one that they share with many adults, includes greed, corruption, the disparity in income and wealth, the tax code, high unemployment and the influence of money on politics, but has yet to be telescoped into a unified platform. To rig the system in their favor, for example, from 1998 to 2008, the financial industry invested more than $5 billion in campaigns and the same group, over the same period, paid $3.3 billion to lobbyists, according to the Center for Responsive Politics. Police brutality could provide the plot line. Similar protests have spread around the globe to hundreds of cities in nations with fragile economies and high unemployment.

The incidents of police aggression are occurring as cities begin to tire of having permanent encampments and tent cities in public spaces which officials claim are deteriorating rapidly. In New York, where the demonstrations originated, protesters have occupied Zuccotti Park for more than a month, living in tents, using both public and private facilities, surviving on delivery pizza and food provided by restaurants and private citizens. The homeless have also infiltrated the movement to take advantage of free food and all the comforts of a tent city on cool, even snowy autumn nights. Polls show that the demonstrations have the support not only of New Yorkers but a broad swath of middle Americans who are upset with the condition of the economy. In Oakland, police overreacted when demonstrators began a march to City Hall and fired tear gas and bean bags into the crowd. A 24-year-old Marine veteran, who served two tours in Iraq, was critically injured and must undergo brain surgery. In Atlanta, police used their clubs to teach the young protesters the high price of freedom of assembly.

In Baltimore, police, so far, have maintained their cool and their distance while Mayor Stephanie Rawlings-Blake—perhaps under pressure from the business community—attempts to mediate a compromise with protesters who are bivouacking at McKeldin Square, in the Inner Harbor, by clearing the space of all but two demonstrators at night. The protesters usually number about 30 by day but swell to about 150 by nightfall. Here, too, the homeless have moved in to share the booty of municipal rent-free living in tents with blankets and free nourishment. McKeldin Square is a designated demonstration area where, Rawlings-Blake says, the protesters can carry on, by day, as much as they wish. The mayor has said she hopes to avoid a “violent exchange.” But in an interesting counterpoint to other cities, both the police and firefighters unions have joined the ACLU in asking that the demonstrators be allowed to continue occupying McKeldin Square, full strength, in 24-hour unicycles. The Baltimore branch of Occupy Wall Street has spread its grievances to Annapolis, the state capital, where small businessmen are organizing similar protests over economic issues.

By contrast to other unwelcoming cities, a third demonstration site has been announced in the nation’s capital, according to reports, a city that is an accommodating host to frequent marches and demonstrations. Occupy Pennsylvania Avenue—with the White House at one end and the nation’s capitol building at the other—is planning a daily showing in a demonstration for change (with no specifics added.) The two other protest sites in Washington are Freedom Plaza and McPherson Square, where the homeless are commingling with protesters in the temporary tent city. In Richmond, a collision of generations as well as ideologies has pitted the Tea Party against Occupy Richmond. The Tea Party is demanding that the campers pay $8000 in fees for occupying public space free and illegally. And Occupy Boston has removed two members from its finance team for failing to follow the group’s rules when making spending and fundraising decisions. In San Diego, police in riot gear cleared Occupy San Diego after declaring unlawful assembly at Civic Center Plaza. There were arrests but no reported injuries.

The Occupy Wall Street protests have posed a difficult calculus for both political parties. Both Democrats and Republicans are reluctant to embrace the movement and they are equally hesitant to denounce the demonstrators. President Obama, the elected official most directly affected by the withering economy, initially attempted to tap into the energy on the streets by sympathizing with the cause but he has since pulled back as he makes his case to the public at-large on the economy in the hope that the broad message resonates with the protesters. The GOP’s angry white male, House Majority Leader Eric Cantor, of Virginia, originally described the protesters as a “mob”—with all of the word’s untidy implications—but he retreated soon after and sugar-coated his remark by saying that the demonstrators “have a point.”

The Occupy Wall Street protests embrace a rich pool of youthful voters and recent college graduates as well as the largest unemployed sub-group in America. This sector of the population supplied much of the energy and foot-work for Obama’s campaign in 2008 and could be critical to his re-election campaign in 2012. The unanswered question is whether they are angry at him as well.

The Occupy Wall Street protest, in all of its amorphous collection of loose ends that it is, has yet to assume the meme of a full-blown counterculture movement. The anti-war protests of the 60s and 70s had their identities in drugs, tie-dyed tee-shirts, bell-bottomed jeans, psychedelic Volkswagen vans and peace amulets. So far, the badge of the Occupy Wall Street generation is the aluminum-ribbed collapsible pup-tent, presumably purchased on credit cards from L.L. Bean, Land’s End or EMI sports gear. But give the cops enough time and they’ll screw up for sure and the kids will come up with an emblem, an anthem and their own Bob Dylan to drive the point home. They already have the cause and the commitment and an election coming up to use the ultimate weapon of protest—their votes.