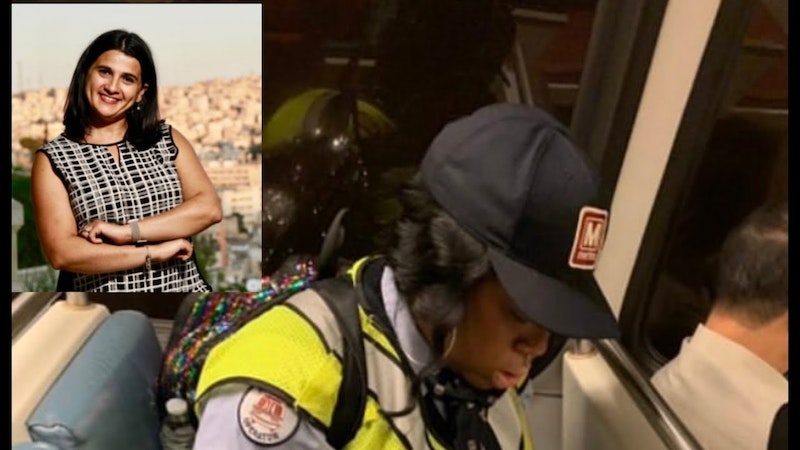 Natasha Tynes was riding the Washington D.C. Metro Friday morning and was annoyed by a uniformed Metro employee eating her breakfast on the train, a violation of transit authority's rules. Receiving no satisfaction when she confronted the employee, Tynes decided to air her grievance on Twitter by posting a photo of the employee along with this tweet: “When you’re on your morning commute & see @wmata employee in UNIFORM eating on the train. I thought we were not allowed to eat on the train. This is unacceptable.”

If vengeance, or what you consider justice, is what you're after, Twitter can be handy, but you have to know what you're doing when handling power tools. Tynes didn't, so she got petty and publicly went after a working class black woman for a relatively minor offense instead of complaining directly to Metro. The reaction against the novelist with a new book about to come out was swift and severe. Book distributor Rare Bird severed its ties with Tynes, and then publisher California Coldblood lived up to its name and said that it was halting all shipments of They Called Me Wyatt in advance of cancelling publication.

Both of the above firms cited the hungry Metro employee's race as a factor in their actions, although there's no evidence that race was a factor. They both couched their criticism of Tynes in the predictable cant of intersectionality. California Coldblood, which recently praised the author's “sparkling debut” in a now deleted tweet, tweeted that “black women feel the effects of systemic racism,” adding that they hope Tynes learns to be an “ally” to black women rather than an “oppressor.” Rare Bird, on Twitter, said black women face a “constant barrage of this kind of inappropriate behavior directed toward them and a constant policing of their bodies."

There's much talk about systemic racism these days, although the details are often left out. If we’re to believe California Coldblood, a woman of color losing her temper and calling a fellow WOC out in a non-racial manner’s an example of systemic racism, although it's not clear what system Tynes is operating within.

As for Rare Bird's reference to policing women's bodies, that's a non sequitur. That particular feminist complaint has to do with men telling women how they should look. For example, last year Billie Jean King accused the French Open tennis tournament of policing women's bodies for saying Serena Williams' catsuit would no longer be allowed. Tynes' woman-on-woman gripe had nothing to do with the Metro employee's appearance.

It looks like California Coldblood and Rare Bird decided to shoehorn some of the parlance of intersectionality into their condemnations of Tynes as a means of “rallying the troops.” That the language they chose to use had little connection with reality isn't surprising, given the religious nature of the politics of social justice. Just toss some lingo out there as red meat to get the mob salivating. They won't notice that you're just blathering.

Another inexplicable aspect of this case is that Tynes, as a Jordanian-American WOC—and perhaps even a Muslim too—is ostensibly on about the same rung of the victimhood ladder as the Metro employee, but is now treated like a white male, even though she's apologized. California Coldblood's top executive is Robert J. Peterson, a white man. Tyson Cornell, also a white man, runs Rare Bird. Where's the discussion about white people depriving a minority woman of something she worked hard for because of one mistake?

Rare Bird and California Coldblood acted quickly and with such finality because that's what the mob demands. Did Tynes recently experience something traumatic that might’ve clouded her judgment or were there other extenuating circumstances? The days when such questions could be asked are over. We've regressed, and now it's like when horse rustlers were hanged on the spot.

The Chicago Cubs organization is another practitioner of pseudo justice that grants no mercy to the accused. The baseball team just indefinitely banned a fan who made what they called a “white power” hand signal—the “okay” sign with the hand pointed downwards—on camera in front of a black announcer. The problem is that the Anti-Defamation League, a recognized authority on such matters, has declared this hand signal controversy a hoax that was started on 4chan, whose sketchy denizens love whipping progressives into a righteous fury over something they've manufactured.

We're getting all this kneejerk “justice” because all it takes is 30 lathered-up zealots on social media to frighten anyone in an executive position. The default position's now that you're a racist, even if you’re a minority yourself, if you take any sort of action against a black person, especially if it's a woman.

We're operating under a new set of rules, but nobody knows what they are. The intersectionality police make them up on the spot. Perhaps the Natasha Tynes controversy offers a disturbing clarification of these rules. Had she been black herself, there's no way she's getting her book cancelled. But she's just “brown.” Despite all the talk of “black and brown” people and people of color, being brown doesn't count for much of anything under certain conditions. So much for solidarity.