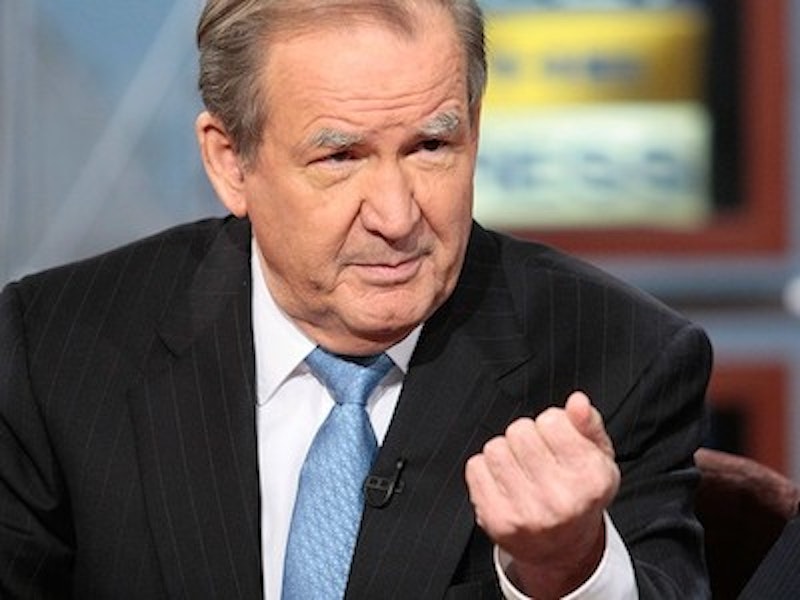 The final episode of Veep and penultimate episode of Game of Thrones may have reminded some viewers that “leaders” are dangerous, corrupt people whether they’re democrats or aristocrats, perhaps especially if they are both (though there are probably still a few psychotic fans shouting, “You go, girl!” no matter what happens on those series).

In the real world (more or less), Pat Buchanan is a living reminder that unorthodox political figures can combine the worst aspects of right and left. Socially intolerant and profoundly ignorant on economics, he thunders on in support of worst-of-both-worlds policies, perpetually emboldened (much like Trump) by the undeniable fact that the establishment against which he rails is about as clueless as he is.

Somehow learning nothing from all the decades he spent around free-marketeers and would-be government-shrinkers, he now joins the vicious, myopic Ann Coulter in praising taxes. Those two don’t seem to have any principled objection to taxation so long as it harms their enemies, the Chinese in Buchanan’s case and the Koch Brothers in Coulter’s (she’s peeved they like immigrants).

In his latest column, Buchanan praises Alexander Hamilton (the big government advocate among the largely-libertarian Founders) for crafting the United States’ first tariffs—taxes on imports. Buchanan laments that we later fell into “the British-bred heresy of unfettered free trade.” Talk like that is enough to prove that conservatism and populism are inadequate to beat back socialism and protect people’s property, except insofar as conservatism and populism occasionally meander mindlessly into taking good libertarian positions.

Sounding as if he’d make a stupendous Stalinist, Buchanan goes on to ask, “What patriot would consign the economic independence of his country to the ‘invisible hand’ of Adam Smith in a system crafted by intellectuals whose allegiance is to an ideology, not a people?”

He falsely claims free trade hasn’t built great nations and warns with a puritanical zeal befitting a veteran of the Drug War-launching Nixon administration, “Once a nation is hooked on the cheap goods that are the narcotic free trade provides, it is rarely able to break free.” Heavens, not inexpensive goods! Anything but inexpensive goods! We wouldn’t want people trading across borders when they could be lobbing missiles or angry speeches instead!

Buchanan’s general rhetorical approach is that of a mediocre middle school history teacher with an axe to grind, which means he can always point to whichever specific decades or past presidents seem to fit his thesis. Yet despite his cherry-picking in favor of anti-trade regimes, empires in decline have tended to be precisely the people who turn to protectionism and anti-immigration measures, not just lately but for millennia.

But to avoid potentially endless sifting of historical data for patterns, sometimes we’d be smart turning to economic theory and philosophy, much as theory tends to get bashed in this world. Theory done right can clarify. If “Jones shot Smith unprovoked,” it might not be morally improving for us to spend days getting to understand Jones’ and Smith’s family histories better.

Likewise, there may be a very rough correlation between times the U.S. had high taxes and times it had presidents we still admire, or times we were expanding westward, etc., but finding those crude correlations can’t become an excuse for evading the inescapable logical truth about what tariffs are. They are taxes that punish willing sellers and willing buyers with higher prices, making it harder for all of them to live their lives and harder for them to devote their remaining resources to other activities.

Trade is mutually beneficial exchange (as judged by the individuals making the trades, not some crude legislative proxy for the hyper-generalized public will). Tariffs prevent trade. Tariffs are a nuisance as surely as any other form of tax, or for that matter high-seas piracy or comet strikes.

The right occasionally pretends to appreciate markets and trade better than the left, but it doesn’t take much of an ideological headwind to stop the right in its pro-trade tracks. One minute they’re laughing at stupid socialists for interfering with economic activity, but the next they’re laughing at non-border-Wall-supporters for using avocadoes as just one tiny example of something liable to get more expensive if you cut off supplies of them from Mexico. “Ha ha, stupid socialists taking Americans’ hard-earned dollars!” is followed minutes later by “Ha ha, stupid free-marketeers for caring if Americans lose hard-earned dollars paying more for food or other goods! Who cares?”

Econ only matters when you want it to, apparently. I was under the impression the laws of economics were universal and permanent, but then I’m also one of those laughably naïve Enlightenment types who thinks, for instance, that science works regardless of which ethnic group is doing the lab work.

Meanwhile, lest in our political amnesia we begin thinking the left offers any useful alternative, recall one of Bernie Sanders’ senior economic advisors sending an insane tweet not long ago saying the U.S. needn’t worry about big-government overspending, since the U.S. Treasury Department can print as many dollars as it likes (as if that isn’t a formula for eventual inflation and the draining of resources from the private sector). So I fear the symbiotic deal now emerging across the U.S. political divide is basically: the left will supply the Weimar currency inflation, and when that makes everyone angry and poor, the right will supply the Nazis.