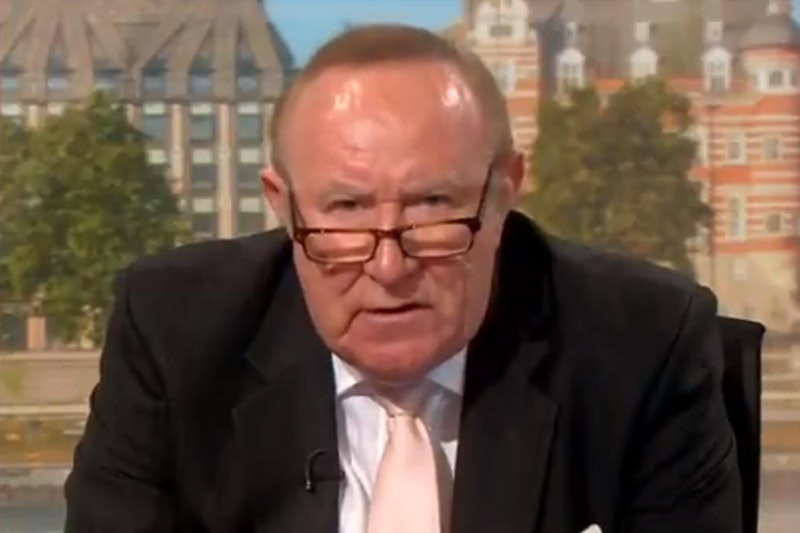 Andrew Neil looks like an old Tory who’s eaten other old Tories and grown larger and meaner as a result. He’s wide, though not tall, and he has a face the size of a basset hound. Speaking, his air is lackadaisical yet insistent. The old monster interrupts and talks over, but he does it as if recalled to some minor duty. He has no interest in airtime himself, but the other person has proved themselves incompetent with theirs. Now Neil must reel off these points and straighten things out. He can do this at length and without flagging, as when a fine-boned person named Owen Jones (“newspaper columnist, political commentator, and left-wing political activist,” says Wikipedia) wants to recite some sins committed by The Spectator, the renowned Tory magazine owned by a company Neil chairs. Neil and Jones scrap for that airtime, neither of them shouting, each pretending he’s merely saying his piece, and the two pieces shudder and collide.

Often enough the other fellow shudders apart, or his voice does. A Labour MP gets batted here and there for his party’s demands re the European Union. The head of Greenpeace is called to account for a phrase on the group’s website. “Let me just quote the committee on air pollutants,” says Neil, and “Not on traded goods it doesn’t. That’s a commission competence.” His voice is light, a tenor, with a whicker up top and a Scottish burr turning the vowels sour in a butter milk sort of way. “That’s the significance of the Singapore judgment,” he says, or jooj-m’nt.

The MP and the Greenpeace man both have full heads of white hair (Neil offers a good deal of in-your-face scalp), and the Greenpeace man is fine-boned. The MP is merely light of build, but he has a nub of a beard and an edge of fuzz along his jaw, and both are the same silver that shows up in the volutes of his crested hair; his tie features a plaid that’s somehow pastel. His head and torso tilt all in one piece as the questions land. “It’s not fantasy a’tall,” the MP protests. The Greenpeace man never sits up. With no tie, just his fine bones and mop of white hair, he looks like an adolescent stranded by the decades, even a child. He can’t even say asthma; it comes out “ass’ma,” for Christ’s sake. Put to the test, he flounders. “Well, what I would say, if you looked up passive smoking,” he says, “it is the equivalent of, of, I don’t know what the actual figure is because I can’t remember offhand, but it’s the equivalent of, the equivalent effect of” and so on.

Greenpeace’s website says, “Air pollution causes 40,000 deaths a year.” Really it should say “premature deaths,” the phrase the Greenpeace man keeps reverting to, and presumably the verb should be “contributes to” and not “causes.” Out of an eight-and-a-half-minute interview, three and a half are spent hammering this matter, one that Neil presents as a matter of tactics. “The way you exaggerate things, put out false claims, in the end, for a cause we all agree with, getting the best air we can—in the end you undermine credibility?” Neil suggests. His criticism of the Labour demands re Europe is that they’re not realistic. Europe would never give all that, so why say you’ll ask for it?

These seem narrow points for such heavy barrages. In America we’d expect higher stakes. Is the President guilty or innocent? Is the sky falling? Whose side is evil, yours or mine? The stakes with a Neil interview are more like Who’s squirming, you or me? One man interrogates, the other gets dug into, and we see how the second man takes it. What’s turned up may be a shoddy phrase on a website or examples of goal-hype by the party out of power. But all right, there it is. We have that much by way of truth, and we watched this pocket change get shaken loose by Andrew Neil, the man who asks the questions. Possibly this is a British thing.

Poor Ben Shapiro didn’t grok the concept. He sensed that Neil was tendentious—“would seem to take us back to the Dark Ages” is quite a waffle iron to throw at somebody—and read that as meaning his eternal foe, the left, was showing its face. Shapiro’s mind sold itself the necessary explanation (“The BBC purports to be an objective, down-the-middle network. It obviously is not, it never has been,” he announced) and he was off to the races. “Why don’t you just say that you’re on the left?” Shapiro demanded, creating a YouTube moment he’ll never outlive.

During the 16-minute interview on the BBC’s Politics Live, the beetle-browed thought leader faced some clinker charges (Neil is always implacable, not always adroit), but he was brought to admit that he said and still believes that Jews who support Barack Obama aren’t really Jews, that he accused Obama of making a fascist State of the Union address in 2012 (“This speech was the fascist mentality in action,” Shapiro had tweeted, though being anything in action is a neat trick for a speech), and that he’s now peddling a book that says we need less anger and more understanding. He was also caught doing his fast shuffle with Hamas and the Palestinians, first saying that his 2010 tweets slurring the nationality were really slurring the group, but then telling us that the Palestinians are a nasty lot because they support the group.

Shapiro’s nose was rubbed in his double thinking and he couldn’t take it. He walked out, doing so after complaining about slogans and gotcha questions. Little did he know that Andrew Neil was the man who grilled Remainers and climate activists, and before that the man Rupert Murdoch put in charge of The Times, and that even today he’s chairman of The Spectator (“There’s Nothing Turbulent About Trump’s Presidency,” says a headline, and another posits “Feminism Has Succeeded—So Why Don’t We Call It Quits?”). Shapiro hadn’t done his homework. But even if he had, he didn’t just mistake his foe for a liberal. He also said, “I’m popular and no one has ever heard of you.” The boy lost it.

Shapiro’s face had tensed early on. As the interview progressed, his countenance grew only smaller and more lowering. His voice, like a can of BBs, rattled faster and faster. One grants that he didn’t falter. His trademark sentence structure held fast even as production galloped. Slender-boned like Neil’s other victims, this was one was still Mr. Aggressive, always grabbing for the conversational levers. When Neil mewed, “I just asked a question,” Shapiro answered, “And I asked you a question. You failed to answer a single one of mine.” Neil shrugged back the boy’s attempts. He was quite certain he had nothing to answer, given that he was a questioner and not a debater.

Shapiro, jabbering away, finally burst. He seemed like a mechanism that had been dialed into the red and then revealed to be a small child. The old beast in front of the other camera was indifferent. “Thank you for showing that anger is not part of American political discourse now, Mr. Shapiro,” Neil said, looking up from his notes only to let his words (“American p’lidiscor”) negligently blur into unhearability. “We’ll say good-bye,” he added, brisk now. In the aftermath, a Politics Live panelist reflected on Neil’s gifts and cast an aside at, well, “American… nitwits.” The rest of the panel was more polite about nationality. But all sides, right and left, united in condemning Shapiro’s foolishness, and the panelists didn’t bother to use his name. This person was known back where he came from, but he wouldn’t be known here. That seemed to be the attitude.

If any Brits are gloating, however politely, one can’t blame them. Truthfully, Shapiro had been very American in assuming that his foreign questioner must be a nobody just because he’d never heard of the guy. A whole other country with its own roster of big names—the thought didn’t penetrate. Nor did Shapiro measure up. He’s made millions of dollars talking politics in the U.S., and that’s something that shouldn’t have happened. It took Andrew Neil to show us what the boy’s worth.