Her “warm feeling” comment on the Holocaust is bizarre, even when taken in context. 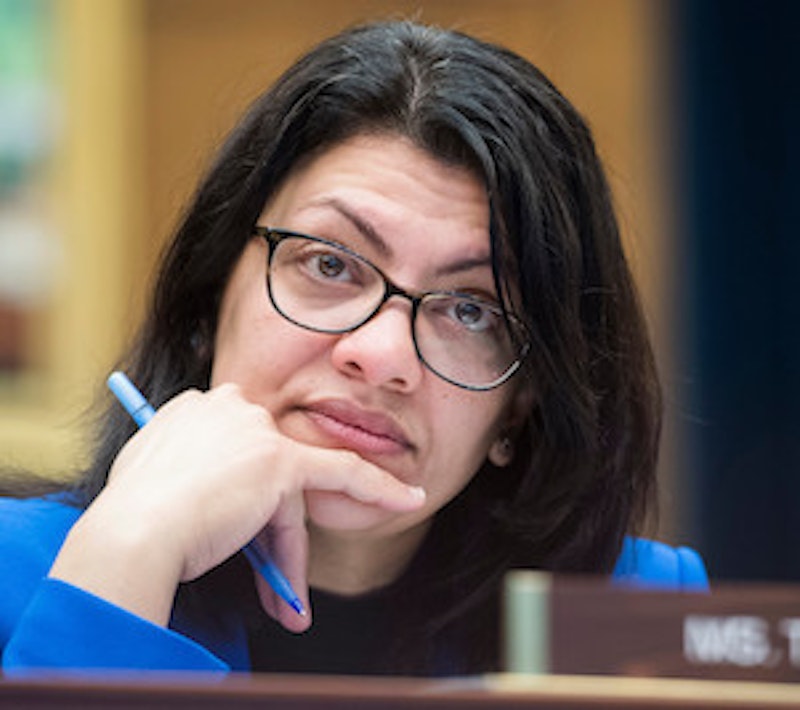 Some explain that the two new Muslims, Rashida Tlaib (D-MI) and Ilhan Omar (D-MN), in the House of Representatives have different perspectives on Israel and they deserve to speak their minds without immediate criticism. Tlaib expressed her perspective on the May 1 Holocaust Remembrance Day (HaShoah) on a recent Yahoo News podcast: “There's kind of a calming feeling... when I think of the Holocaust and the fact that it was my ancestors—Palestinians—who lost their land and some lost their lives, their livelihood, their human dignity. I mean, just all of it was in the name of trying to create a safe haven for Jews... post-the tragedy and the horrific persecution of Jews across the world at that time. I love the fact that it was my ancestors that provided that.”

Love? Those with a different historical perspective took issue with the “providing a safe haven” part. CNN’s John King pointed out that Palestinian leaders supported the Holocaust and used violence to combat the creation of a Jewish state. Haj Amin al-Husseini, the former Grand Mufti of Jerusalem, was indeed a collaborator with Nazi Germany and an admirer of Adolf Hitler. Der Fuhrer warmly received him in Germany on November 28, 1941, but of course there was no talk of a safe haven. Instead, Hitler agreed to the Mufti’s request to support the extermination of any Jewish homeland. On German radio on March 1, 1944, the Grand Mufti said, “Arabs, rise as one man and fight for your sacred rights. Kill the Jews wherever you find them. This pleases God, history, and religion. This saves your honor.”

Tlaib left out a few key details in expressing her ancestors’ sacrifice, sparking rage on the Republican side of the aisle. Liz Cheney (R-WY) took to Twitter to criticize the Michigan politician’s anti-Semitism and for saying that “thinking of the Holocaust provides her a 'calming feeling.’” To speak about being calmed by the post-WWII situation in Palestine was a provocative choice of words, but it's a distortion to claim that Tlaib found the Holocaust itself calming. She'd have known this had she been aware ot everything Tlaib had said, which included pointing out the “horrific persecution of Jews.” Or maybe she knew about that but decided to take the cheap shot anyway. I'd say it's about 50/50.

Cheney's ignorance, or bad faith, was beneficial to Tlaib, who then was able to accurately respond that Cheney and other Republicans were taking her words out of context. Had Cheney and the rest stuck to pointing out the Hitler connection, they'd have made a valid point beyond dispute.

Ilhan Omar came to her sister's defense, but for the most part the Democrats have reacted like the Republicans do when Trump calls a woman a “horse face” or claims that his tariffs are putting Chinese money into the US Treasury’s coffers. Speaker of the House Nancy Pelosi and House Majority Leader Steny Hoyer performatively demanded an apology from Republicans for taking Tlaib's words out of context, but most of their colleagues are just riding this storm out. There's not much political upside to leaving yourself open to charges of defending the “safe haven” comments, but Tlaib’s substantial intersectional clout provides her with cover from criticism. The safer route is to wait for Trump to tweet on the matter and then attack his response, and that's what happened.

John King's reaction wasn't typical within the mainstream media, which in cases like this, when a Democrat's under fire, focuses on the Republican reaction to questionable rhetoric. A typical headline format after a Democrat's said something incriminating is, “Republicans seize on [so and so's] comment on [name your topic].” If you’re a Democrat, you've seen that approach so many times that it doesn't even register with you what's happening, but Republicans are aware of this media manipulation.

Not only did Tlaib try to put a fresh coat of paint on the Palestinians’ disgraceful embrace of the Third Reich, she did it in the context of defending a one-state solution, which would involve Arabs outnumbering the Jewish population, with predictable results. Ilhan Omar may be the only other elected Democrat in Washington to support this radical idea. When someone whose grandmother lives in Palestine talks about a “calming feeling” when she thinks about the Holocaust, it sounds disingenuous, like the intention is to provoke. She wasn't talking about Oskar Schindler, after all. “Infuriating” is the word she wants to use, but can't.

Nothing calming came out of Palestine during the Nazi and post-World War II eras. The Grand Mufti would’ve preferred that the Germans had gassed every Jew in the world so that none of them could move to the Middle East, and he was hardly alone among his people. Tlaib was outright lying when she said she “loves” the fact that her ancestors provided a safe haven for Jews.

Tlaib would’ve much preferred that another part of the world had been that safe haven, but she's not able to say that in public, just like she's unable to talk about the popularity of Nazis in the Middle East during WWII, and even now. But the media and the Democrats are cowed into silence, and the Republican leadership is inept at the countering her rhetoric, so she gets a free pass to keep it up.