UKIP and the influence of far-right nationalism. 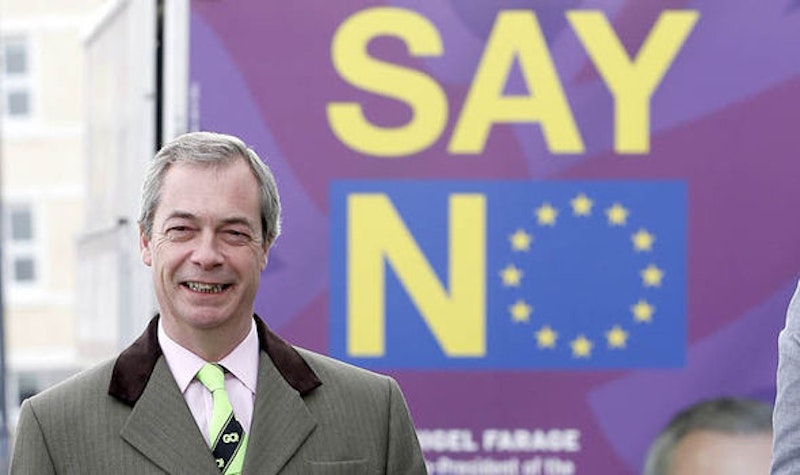 After the Brexit vote last week, Northern Ireland and Scotland are promising to launch their own calls of independence from the U.K., and so is Australia and everything is going tits up. Here’s a fun fact! In 1922 the British Empire governed a fifth of the world’s population and a quarter of the whole Earth. That’s more than 13 million square miles and nearly 500 million (brown) people it bullied for a really long time. The British Empire was largely about conquering brown people and now the country is freaking out because it’s afraid of brown people?

I was in Ann Arbor, Michigan the day of the election, out at a bar having cocktails, celebrating or drowning my sorrows, didn’t know which at the time. Everyone thought the vote would be close, maybe 49-48 percent, but ultimately the remain camp would win because of common fucking sense. Early on it really looked like remain was winning, but then I checked the BBC site later and suddenly leave was winning by some 500,000 votes. Oh. And leave won for the rest of the night.

And then David Cameron resigned.

What’s confusing is that nearly every sector of the U.K., including education, finance, creative industries, celebrities, the media and the government itself was for remain. I don’t know a single person who voted to leave, though that could mean that maybe I’m pumping through the wrong social circles or maybe that they kept their votes quiet or lied or changed their minds at the last second. And the silliest thing of all, and proof that a campaign waged on fear of the other can win, is that Ashfield, a land that is nearly 98 percent white and a population of 111,000 people, voted to leave by 70 percent. London—where all the immigrants are—is a city of eight million and is only 60 percent white, and it voted to remain by 60 percent. The whitest place with the fewest number of brown folks got spooked, and the biggest city with the most stress and highest housing costs from too many people living here, not to mention a high rate of people of color, voted to stay!

This referendum didn’t have to happen. David Cameron, who was firmly in the remain camp, campaigned on having a vote during the last general election in order to keep people who would vote UKIP in his Conservative Party. Nice tactical move. But then, my queen, all you had to do the day you got elected is say "JK JK LOL we’re not having a referendum anymore. Soz, my queens!" Brexit was Cameron’s own fault. Now his legacy will be breaking up two unions—first Europe, then potentially the United Kingdom itself.

The campaign to peace out of Europe was led by Nigel Farage, leader of UKIP, which is the kind of frightening, extreme right party that’s rising all over the world. I don’t know much about U.K. politics but I do know that UKIP is scary and operates on a xenophobic, immigrant-as-boogeyman, “Make Britain White Again” platform. Brexit, a referendum with huge global political consequences, was spearheaded not by sensible conservative values but by a fringe-yet-increasingly vocal white power political party. Think about that for a moment. Is this what the world has come to now? What will happen when other far-right parties in countries like Germany, France and even the US get to influence policies that have global ramifications? Take note, America.