Bipartisanship Isn't the Way You Get Things Done 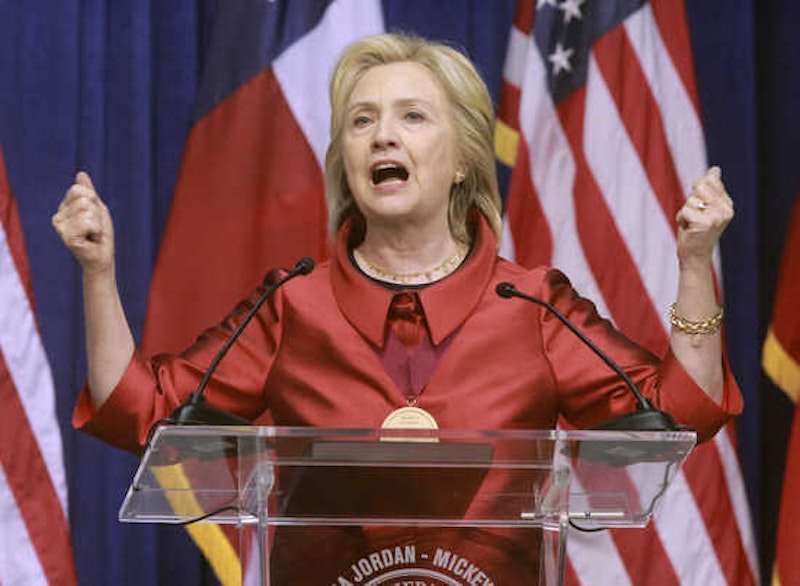 Bipartisanship is a long, awkward word that has a cheery ring to it. Who can oppose rational compromise and friendly persuasion? Reaching across the aisle seems like a path to a kinder, gentler America—one in which people of good faith can work towards common goals, rather than slinging slurs and grinding the government to a halt.

So, Richard L. Hasen's advice to Hillary Clinton sounds like moderate reasonableness itself. Writing at Slate, Hasen chides Clinton (gently!) for "politicizing" voting reforms. Clinton has come out strongly in favor of national early voting and automatic universal voter registration, including automatic registration of high school students before they turn 18.

Hasen thinks these ideas are good, and so do I. Democracy should try to include as many citizens as possible. There's little evidence that expanding the vote increases fraud, and every reason to think, given Jim Crow, that restricting the vote can create systemic injustices.

All agreed so far then. But Hasen feels Clinton's strategy for enacting this policy is bad. She isn't compromising, he says. Instead, she's "politicizing" reform. "[The] partisan way she’s framed the issue—by blaming Republicans for all the voting problems—makes it less likely these changes will actually be implemented should she be elected president. Instead, she’s offering red meat to her supporters while alienating the allies she would need to get any reforms enacted." Less red meat, more bipartisanship, is his recommendation.

But is Clinton politicizing the issue? Or, possibly, is it thoroughly politicized already? Yes, Hasen points to some instances of Republican support for electoral reform—but, as he says, Rick Perry and Scott Walker, both running for the Republican nomination, have recently passed restrictive voting laws. Many Republican-controlled states have done likewise. It's pretty clearly a national Republican strategy.

You can argue that the strategy is not as cynical as it appears. Maybe Republicans really are deeply concerned about voter fraud, despite all the evidence that it's a non-issue. Maybe Republicans really believe that only educated voters should be able to get to the polls, and that setting up barriers is therefore reasonable. Or maybe their push for voting restrictions is a cynical ploy designed to disenfranchise minority voters who disproportionately vote for Democrats. The reasoning doesn't matter. The fact is that the Republicans have embraced voter restrictions as a core Republican policy. Which means they've politicized the issue.

Nor is it likely that Clinton could de-politicize it, whatever she does. Remember how Obama put his weight behind a health care reform proposal based on Mitt Romney's Republican plan in Massachusetts? Even Romney had to disavow it when he ran for president, because Republicans don't want to agree with the President on anything. Does Hasen seriously think that if Clinton had moderated her rhetoric, Republicans would suddenly get behind her expansive vision of voting reform? The only way Clinton would’ve had a chance to get the Republican party to support universal registration with any enthusiasm is by coming out strongly against it.

Voting reform isn't going to happen because Republicans are wooed by Clinton's bipartisanship. If voting reform comes, it'll be for the same reason that health care reform came. Which is to say, it'll happen when the Democrats are in a strong enough position to substantially control both the executive and the legislative branch.

In talking about voting reform in partisan, enthusiastic terms, Clinton is putting that issue at the top of the Democratic agenda. When we are able to, she's saying, this is one of the first things we'll do. And it may take a long time; health care reform, even in fragmented, compromised form, took more than a decade. Voting reform may take as long or longer—and may never happen, if other Democratic politicians don't pick up on it over the years. But Clinton's making the case that it's important, and that it should be a defining issue for the party. That doesn't mean that legislation will ever pass. But it seems a more likely strategy than trying to convince the Republicans to sign on to a policy they've already enthusiastically rejected.