The Candidate Who Stayed in His Room

What happens when your aides really don't like you. 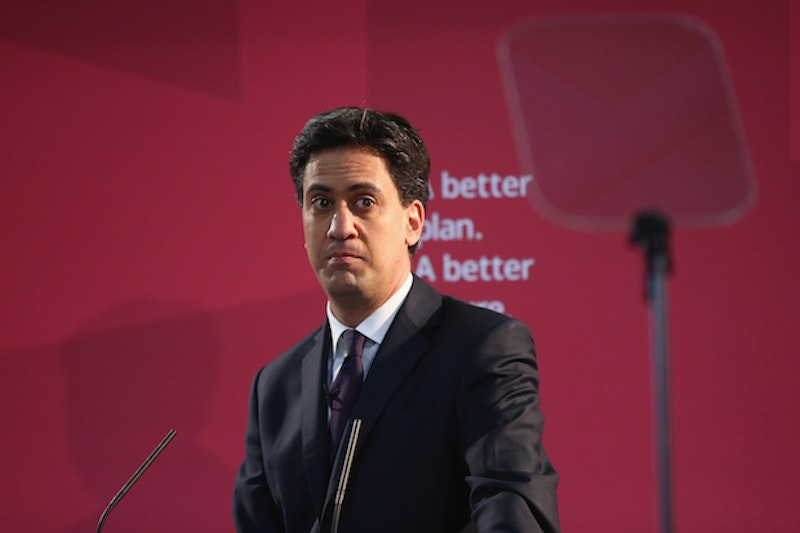 Warning: the most interesting part of the next sentence is right at the beginning: “Miliband was so distraught that he shut himself in his hotel room, where a series of people including his wife, Justine, and his speaking coach, the Donmar Warehouse artistic director Josie Rourke, joined him and tried to offer some reassurance.” That's from The Guardian, which has a long piece on why Ed Miliband never became prime minister of Great Britain. One reason he didn't, though this isn't stated, is that voters suspected he might be the sort of person who gets rattled when things go badly and then must be coaxed from out of his room. Various anonymous aides are here to tell us that this was actually the case, and that the coaxing didn't work. They want us to know that the would-be prime minister was a soggy handful.

The material quoted above describes the terrible aftermath of a speech Miliband gave to the Labour Party Conference last September. Miliband was leader of the party, and his speech was supposed to show his followers and the general public what they could expect if Labour ran the government again. But he got fazed. That very morning the prime minister, David Cameron, had said Britain should join in bombing ISIS, and Miliband had to re-jigger his speech to say that he thought so too. Re-jiggering was a challenge because he meant to recite the speech from memory. He'd done so at the previous year's conference, and the one before that, and he was doing so again. The Guardian doesn't say why, and I bet the British don't need it explained. They're like that about displays of verbal prowess for its own sake. Tony Blair's feat of speaking to France's National Assembly in French, no grammatical errors, was an early milestone in his rise to glory.

Miliband was not up to the task. As he spoke, bits of various drafts came and went in his head, assembling themselves into whatever the new text would turn out to be. A joke about Benedict Cumberbatch reappeared. The section on the deficit evaporated. He had been going to say Labour would “eliminate the deficit as soon as possible.” Now he said nothing about it at all. But, as far as the public was concerned, Labour was on probation regarding the deficit. The crash of '08? Well, Labour was in power then, and it ran a deficit, so the public figured Labour had spent the economy into the ground. Now Miliband wanted to show how Labour would lead, and the deficit slipped right out of his head.

He knew how bad it looked. “We tried to cheer him up, but even then he was too upset,” says an adviser. “He did not come to the celebratory party. He just did not want to come out of his room.”

The account of Miliband's speech disaster comes from the person just quoted, “one of the advisers most involved in its [the speech's] writing.” I suppose this person's name pops up elsewhere in the article, attached to a big title. Going by the Guardian article, Miliband's top handlers found their fellow just, well...  “At the meeting, Miliband was suspicious and defensive,” the article says of a gettogether between Miliband and his strategists. The aides said Labour had to re-gear its electoral approach after flopping in the elections for the European Parliament. Miliband apparently felt badgered. An unnamed attendee: “There was no explosion, but the tension was horrible. You could cut the air with a knife, and everyone wanted to get out. It was very unpleasant.”  No explosion, but a monster sulk.

“In the days that followed, there were angry phone calls and warnings about loyalty,” The Guardian tells us. Miliband had his eye on one aide in particular, and he knew how to deal with the rebel. The Guardian: “Miliband did not speak to Livermore, the perceived ringleader, for a fortnight.” That was Spencer Livermore, Miliband's “general election campaign director.” I don't know if he wrote speeches or not.

That's England!  From The Guardian's description of the ill-fated party conference: “Yet the attempt to humanise some rather abstract messages by telling stories about ordinary people—such as 'Gareth,' whom Miliband had met while walking in Hampstead Heath—fell horribly flat.”