Anarchists for Peace and Free Speech

It's not all black bloc rioters. 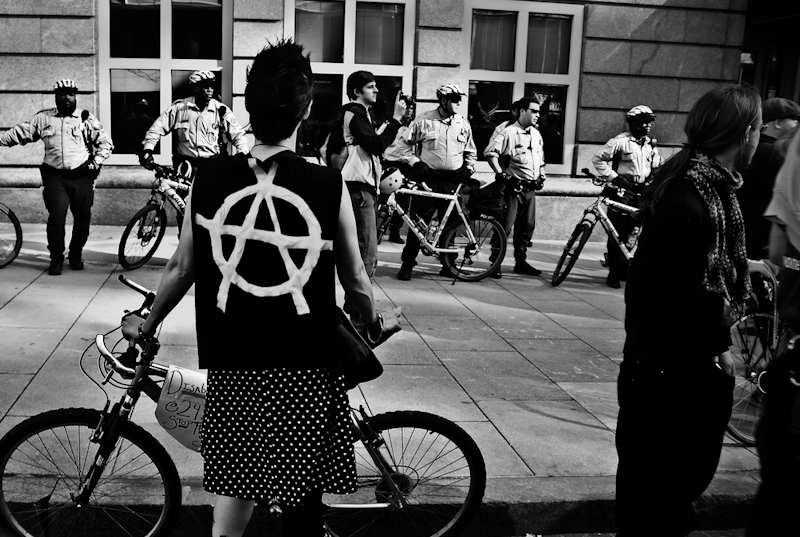 Clothed in rage and black balaclavas, anarchists have shown up at anti-Trump protests and campus actions against right-wing figures, often as the most or the only militant force. They burned a limo and broke windows near the White House during the inauguration. They were at Berkeley, agitating against right-wing provocateur Milo Yiannopoulos and at NYU trying to shut down comedian Gavin McInnes. When white supremacist Richard Spencer got sucker-punched on video at the inauguration, many in the blossoming anarchist Twittersphere became armchair Nazi-punchers.

In the history of anarchist theory and practice stretching back to the mid-19th century, there is a strand of violence (as well as of brutal police repression), which has publicized and often discredited the movement. But it’s an appropriate time to point out that there’s also a rich tradition of pacifist and peace-oriented anarchism, particularly in the United States, which includes such figures as the feminists Lucretia Mott and Sarah Grimké, the abolitionists William Lloyd Garrison and Nathaniel Peabody Rogers, and, moving further abroad, the novelist Leo Tolstoy.

Garrison, for example, was called an "absolute non-resistant," which was also true of Mott, a devout Quaker. Both opposed the government of human beings by human beings on the ground both that it was tantamount to slavery and that it rested on physical violence.

Declaring the position of the Peace Convention in Boston in 1838, Garrison wrote: “We cannot acknowledge allegiance to any human government; neither can we oppose any such government by a resort to physical force. We are bound by the laws of a kingdom which is not of this world; the subjects of which are forbidden to fight, which has no state lines, no national partitions, no geographical boundaries; in which there is no distinction of rank, or division of caste, or inequality of sex.”

Tolstoy reprinted the whole of Garrison's declaration in his book The Kingdom of God Is Within You, which was in turn important in the development of Gandhi and King's approaches to non-violent resistance.

Potentially at least, anarchism and pacifism are, as Garrison and Tolstoy saw, bound together conceptually; it’s plausible to argue that government could not operate at all without physical force, coercion, incarceration, and other forms of violence, so that pacifism entails the rejection of state power. Mott said that people "should have no participation in a government based upon the life-taking principle—upon retaliation and the sword." On the other hand, anarchism does not entail pacifism, and many anarchists have considered themselves insurrectionists and violent revolutionaries.

This debate has extended throughout the history of anarchism. In DC and London in the 1980s, for example, the political punk movement split between militant anti-fascists and “peace punks.” The two strands continue among anarchists now, though the more war-like party is the more visible.

What’s perhaps new in anarchism for 2017, after its intersections with anti-globalization and anti-austerity movements, with Occupy and Black Lives Matter, is its censoriousness, its concentration on erasing symbols and silencing speakers. Anarchists, particularly in the United States—people like Ezra Heywood and Emma Goldman—were foursquare advocates of free speech. In 1878, Heywood was sentenced to two years' hard labor for disseminating information about birth control, and in 1917 Goldman was deported for opposing conscription during World War I.

The idea of anarchists turning against free speech is in excruciating tension with the anarchist tradition, pacifist or not. Few groups have been so vilified and so caricatured, and no set of political beliefs has been as subject to censorship. Emma Goldman, for example, was a free-speech fundamentalist, appealing to Jefferson and Thoreau even as she was thrown in Rikers Island for urging hungry people to "take bread."

As she wrote in 1908: “I believe that free speech and press mean that I may say and write what I please. This right, when regulated by constitutional provisions, legislative enactments, almighty decisions of the policeman's club, becomes a farce. I am well aware that I will be warned of the consequences if we remove the chains from speech and press. I believe, however, that the cure of consequences resulting from unlimited exercise of expression is to allow more expression.”

That same year, Roger Baldwin, later one of the founders of the American Civil Liberties Union, saw Goldman speak on this subject and devoted his life to the cause of free speech.

Like many longstanding political movements, or perhaps more than any, really, anarchism comes in many forms; there are many liberatory possibilities to explore. I hope today's black bloc anarchists and campus radicals will do that.

Check out a gallery of peaceful anarchists here.

—Crispin Sartwell is the author of Against the State: an Introduction to Anarchist Political Theory.