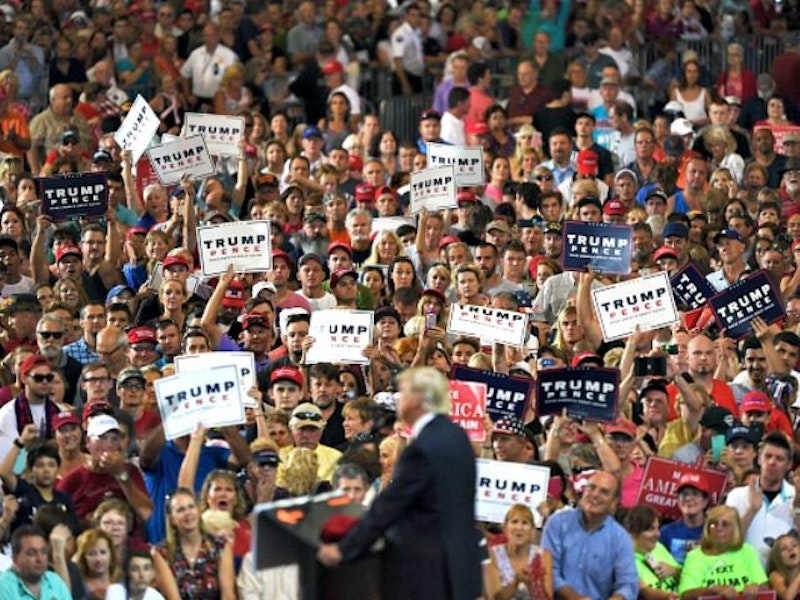 Donald Trump got dropped into the top job for a number of reasons: Hillary Clinton’s hubris, the FBI’s confiding nature, white people’s uneven ability to handle a population that’s changing color. But here’s one factor that can’t be ignored: Trump has to act out, he has to or his soul dies, and a large part of the country loves him because of that. They want to see him do it, and he wants them to see. He and the fans want the same things on their TV. That’s why he’s a star.

Now the rally. He held it last weekend in central Florida and paid for it with campaign contributions. Normally presidents don’t file for the next campaign cycle until its well along. Trump filed the very day he was sworn in and he just held his first re-election event. Unkind souls say the battered chief (Politico: Trump “has found running the government harder than he expected, aides and allies say”) just wanted to hear a crowd say his name. No doubt, but he had a tactical motive too.

Our chief executive flopped with his inauguration turnout, whereas the travel ban protests and the Pussy Marches drew vast numbers. Trump had to show he can get a lot of bodies in one place. As it turns out, he drew 9,000 but enough to fill a TV screen.

Trump’s other motive is that he does well when shouting his internal commentary at a throng of supporters. No text, no teleprompter, just Trump performing the verbal-emotional equivalent of unbuttoning his pants and getting comfortable. Meanwhile, thousands cheer. Then millions dig it at home. Millions more may be rolling their eyes, but they aren’t fans.

Our boss has had it up to here with bad-news chyrons and snippy talking heads. The wrong stuff is on his TV and he’s going to put the right stuff up there instead. Hence 52 minutes of the chief executive making noise in Melbourne, FL’s AeroMod hangar. That was preceded three days earlier by an hour and 17 minutes of Trump getting chesty with news reporters. The press conference? “The President’s idea, 100%,” says somebody high up (a “senior administration official”) to CNN. The person says that Trump, rolling up to work in the morning, greeted his aides with the words “Let’s do a press conference today” and the rest was history.

This sounds plausible. The news conference was meant as a grand exercise in schmeckity-schmeck, with Mr. Dynamic straightening out the media numbnuts who’d been plaguing him. The resulting footage is just what Trump’s supporters want to see, and he wants to see it too. Other people may think it’s nuts, but they’re other people.

French thoughts. Turn on a TV that shows Trump and you see a man taking up his space and then some. The territory is all his. Most of us have our petite social space, the modest egg that we maintain intact while hobnobbing with others. Trump’s zone is imperial. Its arc is grander than his impressive belly and renders him gross or splendid, depending on one’s point of view.

For many people it’s comforting to see all available social space commandeered and laid up in one place, piled beneath a single individual who can decide the room’s social weather. Trump is that man, which is why his followers don’t mind when he says, “The leaks are absolutely real. The news is fake because so much of the news [said with a hint of let’s-face-it weariness] is fake.” The leakers are wrong in their way, by being leakers, and the media is wrong in its way, by being fake. One set of Trump’s enemies is entirely wrong and so is the other, and those are the terms on which Trump will understand the situation. He announces as much to the room, and fans at home watch social space getting arranged the way it should be—for one man’s psychic comfort, his deluxe psychic comfort. They see life as it ought to be lived but never is. The ideal is forced into existence, and they figure that any guy who can do that ought to be running the country. As it turns out, though, he has other things to do.