There Was One President Up There, and It Wasn’t Trump 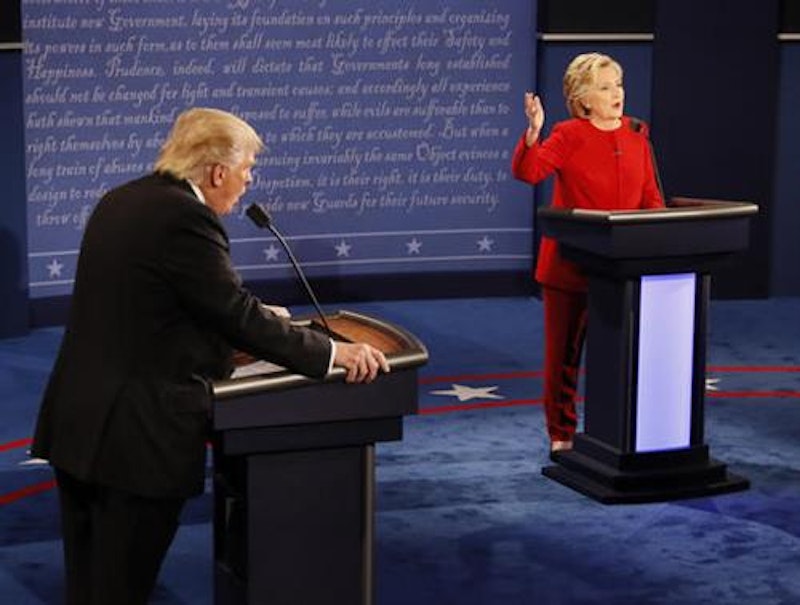 Toward the end Hillary Clinton’s head was cocked and her mouth set at a tilt. Her eyes seemed to be considering which vertebra in Donald Trump’s neck could be severed the most cleanly. All in all, she appeared to be silently simmering and rather happy about it. Earlier in the debate she’d been trying to appear unruffled and serene, with a wall-to-wall smile and subtly off speech patterns. The Hillary of that phase sounded like her words had been spoken at different moments and then spliced together in her mouth. By contrast the cocked-head Hillary had snapped to. Stumpy the Avenger, as I call this Hillary, isn’t calculating her affect. She’s focused on the prospect of smiting.

Stumpy showed up during the exchange on national security. Trump careened along the secret history of his opposition to the Iraq War (“I had numerous conversations with Sean Hannity at Fox”). Meanwhile, Hillary’s eyes measured him, growing harder. Probably it’s no accident that national security could summon the Stump. This is one subject for which the public Hillary becomes fully herself. She regards being commander-in-chief as a mission above others. Any projecting she does on this topic isn’t a chore; she’s bringing her essence into full focus.

For instance, there was her commander-in-chief moment. “I want to reassure our allies in Japan and South Korea and elsewhere that we have mutual defense treaties and we will honor them,” she said, her face strong for the camera. Presidential candidates angle for commander-in-chief moments. During last year’s debates, the period of the GOP’s candidate pile-up, the monkeys all but elbowed each other aside to look resolute and talk about America’s exceptional role. None measured up. But Hil, for better or worse, is born to be commander-in-chief, and she seized her moment with both hands and a full heart.

She was living, not just acting. Her remarks were supposed to score with voters, but also to firm up America’s mutual-defense treaties. After all, when a major-party nominee lets the world know he’s agnostic about our treaties, the other party’s nominee had better let the allies know that nothing’s going to change. In other articles I’ve been listing signs of the end of Reaganism. Here’s a beauty. In the debate, the Republican candidate for president said, “We cannot be the policemen of the world.” Like he was some professor in 1974, walking to his Volvo. The Democrat didn’t have to me-too devotion to America’s role as Big Kahuna of world order. The Democrat was the only candidate on view who wanted America to go on leading. The Democrat looked like a president, and the other candidate looked like Donald Trump.

Missed chances. Early results indicate that Clinton took the debate. Still, if only she had mentioned Trump’s on-clip advice for an American exit from Iraq. (“How do they get out? How do they get out? They leave, that’s how they get out. They declare victory and leave.”) It would’ve been nice in response to his accusations that President Obama had fostered ISIS by leaving Iraq too soon. And I hoped, at the end of one of Trump’s longer answers, that Hillary would say, “That was very coherent, Donald.” But perhaps it would have been too snide.

Here’s a phantom comeback that haunts me. Bringing up “super-predator,” Trump said, “I think it was a horrible thing to say.” He doesn’t think that. Hil should’ve told him, “You don’t care about super-predator. Roger Stone or somebody gave that to you.” She could have milked the theme: “Everybody knows you don’t care. Years of complaining about p.c., but now you’re shocked by super-predator.” She might have added, “You don’t even expect people to believe you.” That last point is crucial, in my view. Translated into a debate moment, it could snap a key vertebra in Trump’s appeal. I hope Stumpy finds that vertebra and goes to work.