Big Bro Is a Gentle Soul 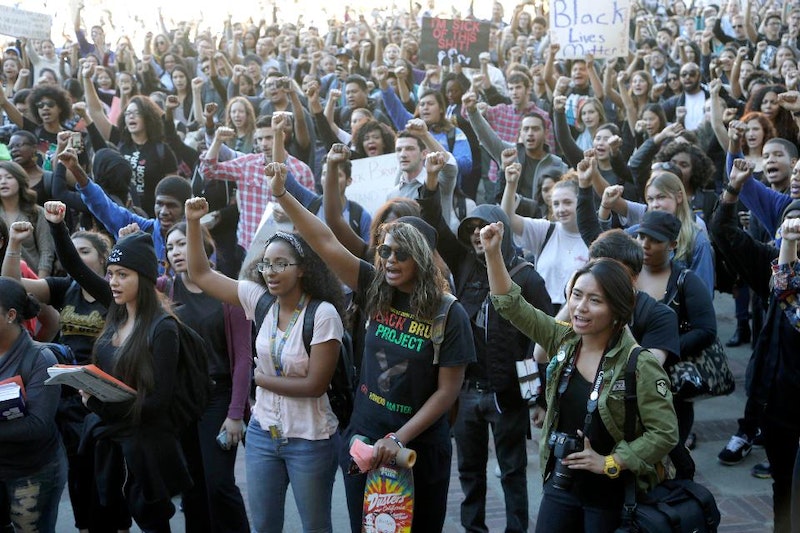 How futile is trying to keep the PC people happy?

This week saw a Bernie Sanders-promoting black man (a.k.a. Killer Mike), quoting an anti-racist lesbian who said gender alone shouldn’t determine fitness for office, get condemned as insufficiently progressive, simply for denying a morally exalted status for femaleness. Give up, PC people. There will never be a happy ending for you (not even if the PC folk alter history itself, as the great George Will reminds us they’d like to). There is no contradiction in saying that PC has run amok at the same time that rude people like Donald Trump are on the loose. That just means it’s a big, diverse country. It has room for all kinds of stupidity at the same time.

The classic image of the censor was of a tough, authoritarian bully, but given that so much of the current PC mania is happening among Millennials, I wonder if their tendency toward having helicopter parents and engaging in fey hipsterism is part of the problem. There may be a thin line between being a gentle, fragile person and being a sheltered, “triggered” one.

I don’t claim all machismo is a good thing, but I think we all see a certain hipster wussiness at play in 21st-century culture, the sort displayed every time a Williamsburg theater or Austin comedy event opens with a childlike, guilty-sounding “Hey, guys, we think it’s really neat we’re all together here.” It’s not all bad—it accounts for the lovely, mournful vibe in, say, the Stars’ video for “Your Ex Lover Is Dead.” It’s a bend-over-backwards effort to be non-threatening, but that stance comes at a price. Conflict becomes as unwelcome in these cultural environs as a burly, sexist dockworker.

And that means that for all the seeming niceness, it may be best if no Republicans or other nonbelievers show up. That way maintaining the “tolerance” will be easier—sort of like keeping the prudes out of Burning Man.

This fragility has the ironic side effect of encouraging trolls, though, since things have been made so very, very easy for them. I’m still waiting for the inevitable day that someone infiltrates a rally full of white feminists who are outraged by pick-up artists’ use of “the negs” (confusing, negative-sounding comments designed to get female attention) and leads them all in a viral-video-ready chant of “No more neggers! No more neggers!” Or perhaps for some wag to popularize the name “get-to” for the place you escape to as a safe space free of white people.

But I realize I’m probably guilty of microaggressions for even joking about such possibilities—and the temptation to engage in them is only made greater by the PC drive to discover ever-smaller “nanoaggressions,” as the parody Twitter account Salondotcom put it. Soon perhaps we’ll hear of “quantum aggressions” that may or may not even exist. What difference does it really make, if the goal is just announcing a new occasion to vent?

If PC were just an isolated phenomenon, merely a problem of the campus left, it wouldn’t be all that dangerous. But the truth is that temporary pleasantness overrules accuracy all the time, and we’re worse off for it. PC is not so different, really, from politely-sustained religious faith, the yes-men culture of corporate boardrooms, or even the feigned adulation over, say, fashion trends. They’re all forms of “playing along” to signal that you will not raise unpalatable truths or rock anyone’s boat. They’re all groupthink. They’re all mindkillers. And it comes in many other forms as well.

Conformist intellectual dishonesty begins with lying to oneself before addressing/blaming/“educating” the out-group. Self-deception doesn’t occur only on the left. Many are proud of mastering the skill. Mastering it means moving beyond doublespeak (adhering to the latest list of taboos in order to talk around a topic) into doublethink (actually believing what the new acceptable words are meant to imply, as Orwell’s broken characters eventually do). People pride themselves on believing whatever they must to serve a regime—and then dare you to utter one word calling them out on it, doubledare, you might say!

People who start out wanting the truth can become pedants, who in turn tend to be teacher’s pets, who in turn make swell Stalinists (psychologically speaking).

No wonder so many people regard anti-PC Trump as a breath of fresh air—but the cruel twist is that he’s delusional himself! Letting him get away with whatever blustery claims he likes is just one more variation on the problem of reality-avoidance. Hillary Clinton claims not to know computers well enough to understand whether she broke any rules? Jeb Bush claimed at one point not to have heard anything about the 9/11 report redactions? Does anyone love truth? Or as I often find myself thinking when reading about British government information campaigns: push your agenda, if you must, but why you gotta be creepy and disingenuous about it?

Once reality itself appears malleable—which is to say, once truth looks wounded and weak—it soon becomes apparent to pols that it’s easier to destroy than create. Far more time is devoted by the reality-evaders to tearing things down than to creating.

Even H.G. Wells, surely a very creative man, turned grotesque when moved by politics, writing approvingly in one story of a bonfire used to destroy all the works of bourgeois society, once people became super-intelligent Progressives due to the beneficial effects of a passing comet. And he meant it, explicitly calling in non-fictional works for a “liberal fascism” (his words, not just a right-wing book title!), which is not so unlike what FDR and many other Mussolini-admirers wanted (at least before Hitler more vividly showed the world the downsides of a fascist system).

What begins with a sort of self-congratulatory, martyr-complex masochism summons forth sadists soon enough. And they’ll happily turn our entire pliable reality into pain.