And I say the hell with it. 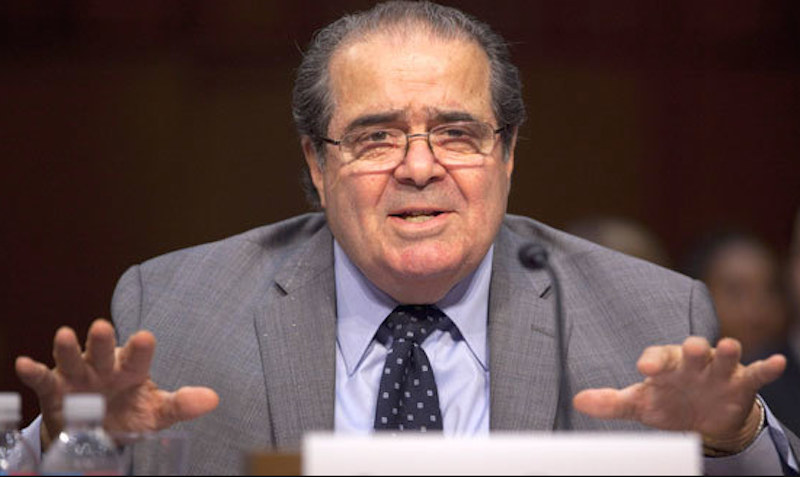 Apparently the late Antonin Scalia always liked to have a liberal among his law clerks. One such liberal just published a fond account of her year working for him. She reports that he was extremely smart and completely honest. He didn’t gin up his reasoning to get the desired results; he followed the law as he understood it, and he understood the law very well. He was a good boss too. He didn’t raid his clerks’ personal time, and his teasing was the sort that the recipient (or this particular recipient) remembers with affection and not resentment.

The ex-clerk also praises Scalia’s effect on the legal profession. “He forced us all to acknowledge that words cannot mean anything we want them to mean, that we have to impose a degree of discipline on our thinking,” she writes. Wait. Lawyers didn’t know that words can’t mean just anything, they have to mean something? No, come on, they knew. People in reference publishing know that. People who fuss over “nauseous” vs. “nauseated” know that. And “a degree of discipline”? A student at a half-decent college learns a degree of discipline from writing a term paper. Imagine making it through law school and clerking at the Supreme Court before finding out that you can’t just say “I feel” and then unfurl your preferences.

But she doesn’t mean that, of course. She means Scalia required more mental discipline, and more concern for the meanings of words, than other legal practitioners did. Not that they didn’t require any, just that (in her view) he required a significant degree more. But the words necessary to express this thought didn’t get past her fingers and onto the screen. She settled for some other bunch of words, a clumsy and blunt-headed crew that make it sound like ordinary judges, lawyers and law professors free associate until they’ve got enough pages to hand something in. That she bungled the expression of her thought is great testimony to Scalia’s skill at honing intellects. No, I guess it isn’t.

Lawyers work with language. So do newspaper reporters. But neither group is all that good with the stuff. I learned about reporters and their verbal limitations from reading newspapers and working on a copy desk. But I had no idea about lawyers until the days after Scalia’s death. That’s when I discovered the fuss people make over the old man’s prose. Journalists fuss over it (“a masterful writer who can make torts tarty and judgments jazzy,” wrote Jeet Heer). So does at least one stand-up comedian (“that crazy fucker wrote a dissent like Lester Bangs after pounding a bottle of Woolite,” tweeted Patton Oswalt). And lawyers? Forget it.

Some joker at Harvard Law said Scalia’s “natural talent” for prose is “the kind which distinguishes a Mozart from a Salieri.” Another pencil-neck testified, “His prose was colorful, literary and commanding, and really stood out in a sea of bland legal writing.” The key phrase there is “sea of bland legal writing.” Anything counts as fancy stepping when everyone else has clogs. As evidence, I present the fact that Scalia fans return again and again to his use of “pure applesauce” and “jiggery-pokery.” A TV writer would come up with those phrases for ornery Grandpa.

The “bland sea” fellow wrote a paper called "Of Golf and Ghouls: The Prose Style of Justice Scalia” for The Journal of the Legal Writing Institute. The New York Times ran an item highlighting what he had found. The capper was “pure applesauce,” of course (“It’s safe to guess that that phrase has never occurred in a Supreme Court decision that doesn’t involve actual applesauce,” the fellow said), but the piece built up to it. First we learned that Scalia “sometimes used hyphens between long phrases,” next that he had what the Times called an “artfully sarcastic use of capitalization.” This is whatever’s-at-hand reasoning to show that someone is an Awfully Good Writer.

The thing about Supreme Court Justices is that everyone knows they’re important. The thing about the law is that very few people understand it. Scalia was possibly the best-known justice of our time, not because the public could admire his reasoning but because he was obnoxiously, aggressively and flamboyantly right-wing. Given the dullness of the legal profession, this splash-making tendency of his was celebrated as high literary style. The celebration was amped up after his death because you have to say something about somebody dead and famous, and it had better sound like praise. Was his reasoning any good? Most of us will never know. The ex-clerk who admires his rigor says it was. But maybe she meant something else.