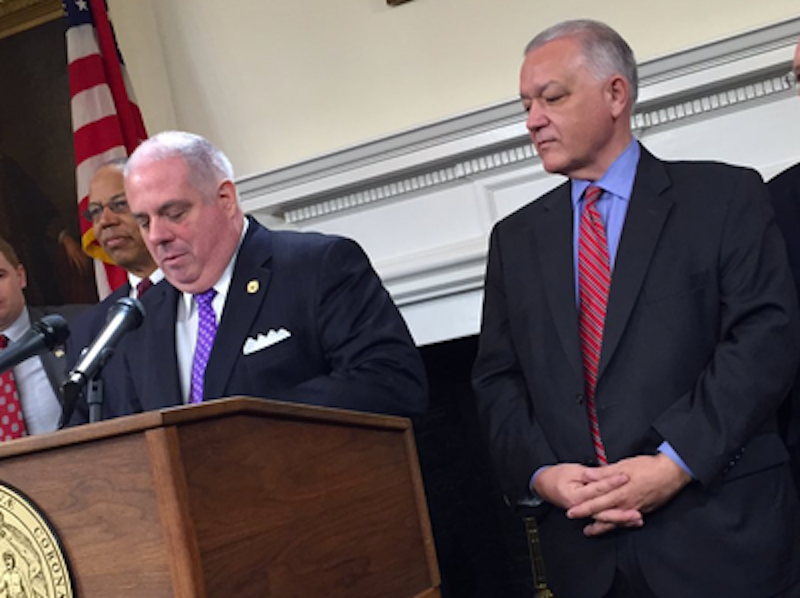 Maryland Gov. Larry Hogan (R) appears to govern by snub. He’s guided by his poll numbers instead of discerning the sensibilities of the General Assembly. If Hogan believes that’s a formula for success, he ought to consider the spectacular decline and fall of his role model and pal, Gov. Chris Christie (R) of New Jersey. Or better still, the gradual evisceration and disappearance of his preceding Republican pathfinder, Robert L. Ehrlich Jr.

Only a couple of weeks ago, Hogan was all olive branches and conciliatory gestures in his state of the state speech, offering an open door and a willing ear to any lawmaker who wanted to chat him up. Now he has Assembly Democrats eager to dismantle Maryland’s unique consolidated transportation fund over a series of slights, and the legislature’s black caucus is fuming because of what they consider the intentional plunder of their community.

A large part of Hogan’s problem is that there are really two Hogans—the Hogan who inhabits the State House and the Hogan who presides over conservative talk radio. And, more often than not, it’s talk-radio Hogan who’s infusing the state’s $42 billion budget and the asphalt industry that Maryland’s transportation program has become. The suggestion is that Hogan views the state as ebony and ivory. Consider these:

—Last year, Hogan abruptly evacuated the dilapidated Baltimore City Jail (which is under state jurisdiction) and shut it down without consulting or notifying state legislators or Mayor Stephanie Rawlings-Blake and city officials.

—Hogan engaged in a nasty he said-she said feud over reaction time and preparedness for the riots and state of emergency that gripped Baltimore City last April. Who won and who lost is in the eye of the beholder, but the prevailing view is that Hogan comported himself well while Rawlings-Blake dawdled. In the end, Rawlings-Blake announced that she would not seek reelection.

—Hogan, to nobody’s surprise but to the disappointment of many, cancelled the $2.9 billion Red Line rail system across Baltimore because of the redundant $1 billion tunnel through the city’s underbelly, again without administering the proper amount of anesthesia to Baltimore’s elected officials.

—Hogan immediately thereafter appropriated the state money set aside for Baltimore’s Red Line to building roads and highways in the counties, especially those in outlying jurisdictions. Most flagrant among Hogan’s proposals was $15 million stretch of road in Garrett County that would go nowhere and carry very few vehicles per day. County officials claimed the project would create 20,000 construction jobs and 10,000 permanent jobs—in a county with a population of only 29,000. The re-allocation of Red Line funds to the counties was viewed as flipping the middle finger to the city.

—Hogan tried to soften the blow by announcing a $135 million plan to improve bus transit in Baltimore. But the plan included a major re-routing of heavily used bus lines, especially those that would affect the black community in neighborhoods such as Waverly and the Greenmount corridor.

—Hogan withheld $68 million last year in education aid that primarily would’ve been distributed among Baltimore City and Prince George’s and Montgomery Counties, the so-called impact aid that is awarded to populous jurisdictions. And there are likely more cuts coming because of phantom students on the city’s books that could affect the $2 billion school construction program for Baltimore that the city struck with Hogan’s predecessor, Gov. Martin O’Malley (D).

—Hogan’s budget, as proposed, would shift construction money from colleges and universities, including those that are traditionally black, to rebuilding a City Jail, conveying the impression that he’s diverting money from kids’ education to building prisons at a time when the nation, in a rare bipartisan agreement, is moving to empty its jails and de-emphasize institutionalism. On WBAL talk radio, Hogan said he wouldn’t build the jail if Baltimore did not want it and he has asked the Assembly to restore the $18 million to the college building projects.

—Hogan further infuriated black legislators when he failed include promised funding in his initial budget for a hospital in Prince George’s County and for demolition of abandoned houses in Baltimore, mostly in black neighborhoods. The proffered money was later forthcoming in supplemental budgets after an outcry over the slight.

—Most notable of all as the catalyst for the new blood-sport atmosphere in the State House was the Assembly’s recent override of Hogan’s veto of the bill that restores immediate voting rights to 44,000 felons while they’re on parole or probation. The majority of them are in Baltimore and they’re now eligible to vote in the April 26 primary election. Hogan contends the Assembly was acting against the will of a majority of the people. Democrats say they were bombarded with hate messages and profanity, orchestrated by Hogan and his allies, in protest of the veto override.

Such seditious behavior is not unexpected when a Republican occupies the normally Democratic State House in Annapolis. The last time such errant behavior occurred was in 2003 when Ehrlich was elected in similar circumstances because of an unacceptable Democratic candidate for governor. Two former lieutenant governors, Kathleen Kennedy Townsend and Anthony Brown, share the trophy.

Ehrlich, in his second year—and this seems to be the affliction with the occasional Republican governor—riled up the black caucus: Ehrlich accused House Speaker Michael Busch (D-Anne Arundel) of playing the race card. And now the roles are reversed. Hogan stands accused of just such a transgression. And before that, in 1967, Assembly Democrats organized a Democratic Study Group to advance a legislative program as an alternative to that of Republican Gov. Spiro T. Agnew, who eventually alienated black leaders.

Ehrlich, like Hogan, also had comfortable poll numbers. He was defeated by O’Malley in 2006 even though he had a 56 percent approval rating. Hogan’s numbers are extraordinarily high, ranging at last count in the upper 60s, no doubt riding on a crest of goodwill and public sentiment over his six-month battle with cancer that he claims to have conquered. And Christie, of New Jersey, was considered a prime contender for the GOP presidential nomination until a staff member, as yet not linked directly to Christie, committed the punishing act of shutting down a major bridge over a minor political dispute. Christie is now toast, back in New Jersey and no longer electable material.

But the Maryland General Assembly is an arena that shunts aside such considerations poll standings. The only poll that matters in the State Houses is having 71 votes in the House and 24 in the Senate. With those in his pocket, a governor can accomplish much of what he sets out to do. Without those precious numbers, generally, he has as much clout as a potted plant.

Governors come and go, but the culture of the State House remains unchanged. Hogan is no seasoned politician. But he’s had more than a year of on-the-job training and a crash course in crisis management. Those experiences should’ve sufficed as object lessons on the delicate art of ego-stroking and the timely invitation of lawmakers to the governor’s office for a friendly chat.

Yet the spitball politics prevails, at least for the moment, because of the Cool Hand Luke dilemma—“What we’ve got here is a failure to communicate.” Hogan has been warned repeatedly that communication with legislators is the key to success in the State House. So without it, here’s a recent sampler:

“There are assaults going on in our black communities,” Del. Curt Anderson, of Baltimore, was quoted as saying. “We are not going to take it anymore… we are not stupid. We know what’s going on, and we are going to retaliate.”

To which Hogan replied (on talk radio, of course): “It’s like they’re [college kids] on spring break.”

The rumbling noise you hear in the distance is the sound of Annapolis beginning to resemble Washington.