Donald Trump Is a Pissy Bitch About Religion

It’s way too personal to talk about, says outspoken truthteller. 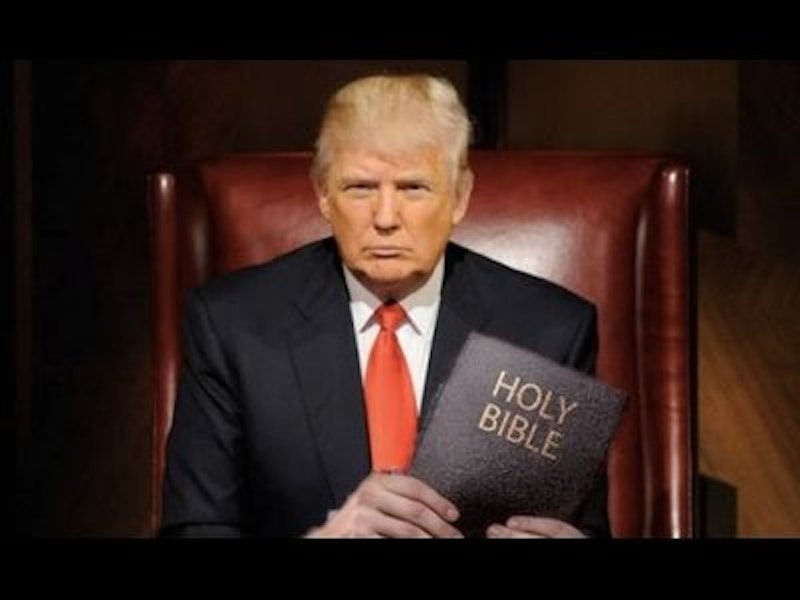 Donald Trump can be as politically correct as anyone. More so. He can be so politically correct it would make your head spin. Believe me, when it comes to politically correct this guy has got it sewn up. He wrote the book, okay? The rest of you can get in line and maybe learn from the master. But there’s a twist of course. Trump doesn’t do PC on behalf of blacks, gays, women, Latinos, Muslims or the disabled. That’s because he isn’t black, gay, female, Latino, Muslim or (in any physical sense) handicapped. Trump is vocally PC on behalf of America’s thriving community of the bogusly faithful. Mr. 2 Corinthians is a late addition to this group, but boy, is he ever on board.

You may have heard that 2-Cor (as I call Trump in his religious aspect) had a beef with the Pope. They’ve de-escalated, but not before Trump unleashed some righteous words on Facebook: “For a religious leader to question a person’s faith is disgraceful… No leader, especially a religious leader, should have the right to question another man’s religion or faith.” The Pope had said that somebody who talks about building walls but not bridges can’t be a true Christian. Well, beats me. I’ll leave that angle to members of the faith. But I’m not going to believe Trump is a Christian just because he gets huffy when queried on the subject.

This huffiness, this boiling cloud of aggrieved sanctimony, is what people object to about PC. Ask a hard question, spot an unwelcome fact, and you lose your eyebrows. All of a sudden new rules for moral behavior appear and they dance on your head. How dare you say…? How can you possibly think…? Don’t you realize that…? Boy, do people hate that stuff. It’s enough to give a bad name to justice for blacks, gays, women, Latinos, Muslims and the handicapped. Still, justice for these groups is worth some crap along the way. They’re part of a society where people think and say obnoxious things about them without even knowing there’s something wrong. The resulting wake-up calls can be unpleasant, and often enough they’re mistaken. That’s how we do things on Planet Earth, with a lot of errors and a good helping of bullshit.

But no leader should question somebody’s faith? Doing so is “disgraceful”? Oh no, please. Where does that rule come from? Can you provide a reason for it? Normally anyone, leader or not, steers clear of knocking a person’s religious faith, the same way we step carefully regarding their weight, height, facial structure, financial situation, competence and truthfulness. Obviously Trump doesn’t and that’s one reason to scorn his boohooing about religion. But here’s another: 2-Cor is in a situation where professions of faith pay off, and he’s a man who, by his own account, is all about getting paid. And a third: he’s demonstrated no understanding or knowledge of the Bible, which one gathers is the central text of his alleged faith.

He’s told enough crowds that the Bible is his top-ranked, number-one book (“greatest book of all time”), but 2-Cor has trouble coughing up a favorite verse. Reporters asked him last August and he whiffed. Five months later he planted himself onstage at Liberty University and declared his admiration for a bit from Paul’s Second Epistle to the Corinthians: “Two Corinthians, 3:17, that’s the whole ballgame. ‘Where the Spirit of the Lord is,’ right? ‘Where the spirit of the Lord is, there is liberty.’” Hence 2-Cor’s name, since Bible devotees typically say “Second Corinthians” and the like, not “Two Corinthians.”

Trump nimbly recovered by blaming Tony Perkins, the evangelical macher who had written out for Trump what the candidate ought to say. Of course, Trump’s need for this help raises an obvious point, a point that the evangelical voiced with regard to Trump’s Corinthians slip. “It shows that he’s not familiar with the Bible,” Perkins said.

I guess not. Here’s what Trump said after his August whiff: “And then they said, 'What’s your favorite verse?' You know, that’s a very personal thing. I don’t like giving that out to people that you hardly know. Frankly, I don’t know if they’re fair questions, or not fair questions, but there are certain things that you and myself and a lot of other people like to keep personal.” Oh yeah. Somebody asked an awkward question, and Trump tried to guilt them for their supposed insensitivity. That’s the maneuver people hate so much about PC. Looks to me like Perkins and the Pope are a couple of straight-shooting truthtellers who don’t beat around the bush. They’re just saying what the rest of us are thinking.