Biden’s desire to move on from Trump and forgive Republicans fits in with America’s political history at least since Watergate. 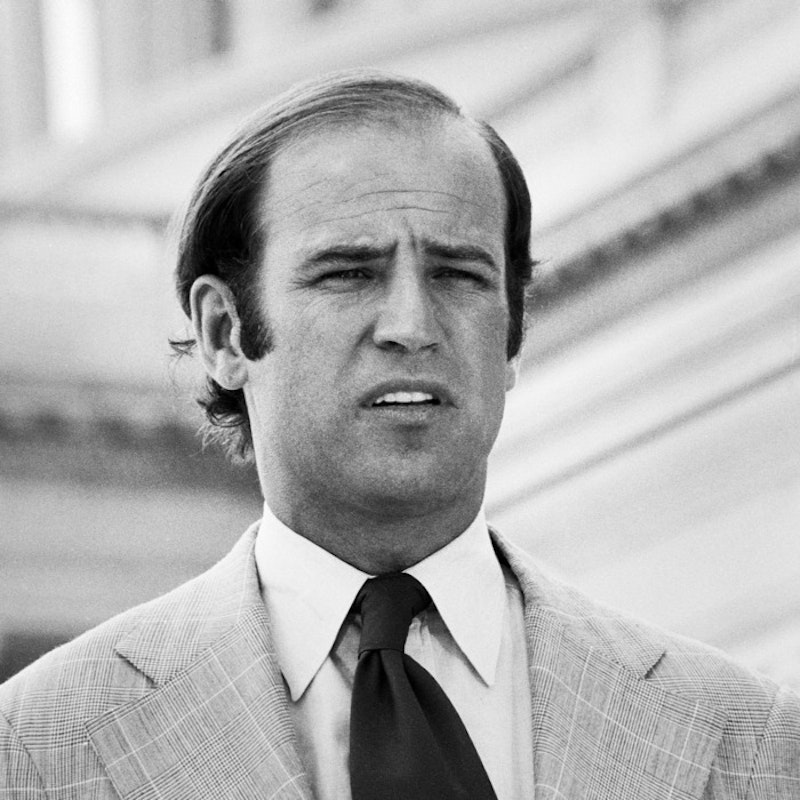 Joe Biden entered the race for the Democratic nomination with a campaign video in which he stated “I believe history will look back on this president and all he embraces as an aberrant moment in time.” Early in May, Biden told a rally crowd in Iowa that “History will treat this administration’s time as an aberration… This is not the Republican Party.” On Tuesday in New Hampshire, he predicted once Trump was out of office “you will see an epiphany occur among many of my Republican friends.”

Let’s take it that Biden’s wrong. Republicans in Congress and the Senate mostly vote as Trump wants, cover up for Trump’s misdeeds, and go on TV to promote his various fibs. Republican voters seem to like him, keeping his approval rating at around 40 percent. So why did Biden say what he said?

I’ve seen two main schools of thought. The first is that he’s letting his personal friendships with Republicans cloud his judgment about the party as a whole. The second is that he’s being a politician, pushing a message he personally doesn’t believe because he thinks it’ll play with the voters. The second makes more sense to me, but I think there’s a third going on as well: Biden’s desire to move on from Trump fits in with America’s political history at least since Watergate. The United States is not a country that finds it easy to hold its authorities to account.

Assuming that time heals all wounds is what Biden’s used to. Americans aren’t interested in punishing their elites. To some extent that’s already helped Trump; a crew of bad pols from previous scandals was available to help him get elected, and to help run the government.

Look back at Watergate, the Iran-Contra scandal, and the Iraq war. How many people were punished to the full extent of the law? A fair number after Watergate, but even then Gerald Ford pardoned Nixon, and Jimmy Carter commuted the sentence of G. Gordon Liddy. George H.W. Bush pardoned most of the people involved in Iran-Contra, while Oliver North and John Poindexter had convictions overturned. Barack Obama declined to even investigate wiretapping, detention, and torture programs begun under George W. Bush, stating he had “a belief that we need to look forward as opposed to looking backwards,” and he was worried that the poor CIA would feel that they had to “spend their all their time looking over their shoulders.”

Why this would be bad is unclear, but look at some of the other figures involved in those scandals. Roger Stone was a dirty trickster for Nixon in 1972, then after working for Reagan in 1980 joined with Paul Manafort (and Charlie Black) to form a lobbying company notable for representing brutal dictatorships. William Barr was Attorney General for George H. W. Bush, and provided extensive consultation on the Iran-Contra pardons. Elliott Abrams withheld testimony from Congress during Iran-Contra, advocated for the war in Iraq, and is currently Trump’s special envoy to Venezuela.

Brett Kavanaugh was associate counsel to the President from 2001 to 2003, and to some extent (his emails from that time haven’t been released to the public) seems to have worked on issues related to surveillance programs. Gina Haspel, now director of the CIA, ran a secret prison in Thailand in 2002, overseeing torture—videotapes of which were destroyed under her supervision in 2005. John Bolton, who stubbornly believed in Saddam Hussein’s weapons of mass destruction, is Trump’s National Security Advisor.

To an extent this is a series of career Republicans working for a Republican candidate or Republican administration. But nothing they did led other Republicans to stop hiring them. They haven’t been shunned, no matter how unethical or potentially criminal their choices.

It’s a small world in Washington, built not just by the people in it but by the complex webs of connections between those people: clubs, think tanks, media organizations, all the places where the elites meet and hire each other. Once you’re in, it’s difficult to get kicked out. What’s most disturbing is that the people outside that world don’t seem to care.

What are the consequences for violating the Constitution? Not much. For waging a war under false pretenses? About the same. Hundreds of thousands died in Iraq chasing non-existent weapons, and the specific Americans responsible for the invasion have yet to pay a real price for it. But then neither has there been much public pressure to hold someone accountable; just as there was no pressure to hold anyone accountable for Iran-Contra. It was easier to move on.

The darkest interpretation is that at some level Americans know that if you prosecute individual law-breakers in government you might find deeper structural issues in the construction of that government. You might discover more corruption than you know what to do with. You might have cause to doubt whether you live in the greatest country in the world. Easier to look the other way. Look forwards instead of backwards. Convince yourself that criminals in high places are aberrations from the system, not embodiments of it.

If so, then in the short term Biden, if he’s in fact playing politics, might be right. It might be the case that justice is impossible for the elites of the United States because the electorate’s so polarized any justice can only be seen through the lenses of Team Elephant or Team Donkey. Perhaps Biden’s just trying to make that polarization work for him, sending out signals that no one in or out of government has to worry about inconvenient trials. And maybe it’ll work. But sooner or later, somebody’s going to have to pay.