Biden, Bloomberg and the Legacy of Liberal Racism

Going tough on crime and playing the race card was seen by Democrats as having little risk. 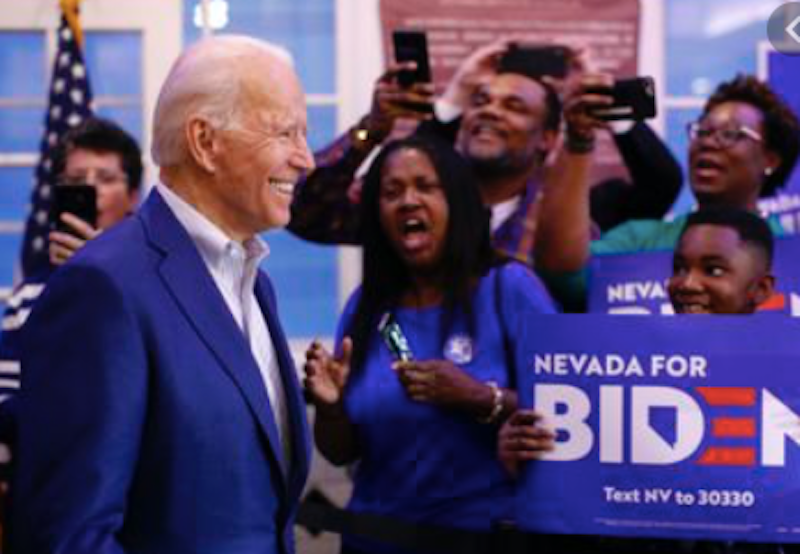 The Democratic Party has improved dramatically on race in recent years. I'd like to think that's because men like Joe Biden or Mike Bloomberg have reflected on the disastrous effects of their previous positions, but really it's just a function of political polarization, which has made "turning out the base" more important than "appealing to the center." This has given black voters the sort of leverage they so conspicuously lacked, from about 1992 to 2019, over liberal politicians. That lack of power helped drop America into an era of racist police violence and mass incarceration.

As the Democrats attack Trump on race, as they should, they’re also grappling with the devastating legacy of "liberal racism," which has been more destructive in terms of its real effects than anything conservatives have accomplished since Jim Crow. Aging liberals such as Biden and Bloomberg are being forced to change their rhetoric and even apologize (if perfunctorily), as the electoral strategy shifts.

In 1992, Bill Clinton ran for president as a "blue dog" Democrat on a strategy of appropriating Republican positions in order to dominate the center, to lure white working-class voters (roughly voters of the kind now associated with Trump) away from the Reagan Republicans. For decades by then, Republicans had won elections by running "law-and-order" campaigns and accusing Democrats of being "soft on crime."

Clinton and others of his ilk (such as his equally blue dog Al Gore) worked to overturn that perception, and it took them to the White House. They’d be more law-and-order than their opponents, and appropriate the race-tinged rhetoric of "inner-city crime." They'd look for "Sister Souljah moments." They’d create a panic about the crack epidemic, picturing “downtowns” as infested with drugged zombies. "They are often the kinds of kids that are called 'super-predators,'" Hillary Clinton said in 1996, an election year. "No conscience, no empathy, we can talk about why they ended up that way, but first we have to bring them to heel."

The Clinton administration's 1994 crime bill was designed to take “law and order” away from the Republicans permanently as a campaign issue. It included 100,000 new police officers, "three-strike" provisions leading to extremely long sentences even for non-violent drug offenses, money for building new federal prisons and expanding the old ones, application of the death penalty to 60 new categories of violent felons, and establishing “boot camps” for juvenile offenders. It passed on a bipartisan basis.

Still, the Republicans took the Senate and the House in the 1994 mid-terms in what became known as "the Gingrich wave." Bill Clinton again lurched right, endorsing welfare reform in 1996 in a way that appropriated his opponent Bob Dole's criticisms of Democrats. Clinton won re-election easily, and received 84% of the black vote.

Going tough on crime and playing the race card was seen by Democrats as having little risk. African-Americans voted reliably Democratic, and people like the Clintons tried to pull up their racial signaling up just at the point where the Democrats remained the lesser of two evils in minority communities. But they were going to get about 90 percent of the black vote almost no matter what they said or did. If the disastrous policies leading to abandonment of the inner city, police violence, and mass incarceration depressed black turnout to some extent (for one thing, by creating millions of convicted felons who’d lost their eligibility), that was easily compensated for by the expansion of the Democrats into the white vote, achieved by throwing the black community under the bus.

Politicians, such as Sen. Joe Biden, pioneered this strategy in the 1970s. He found that there was little electoral price to be paid for opposing busing, for instance. Biden joined Jesse Helms, the segregationist senator from North Carolina, on an anti-busing amendment to the 1975 education spending bill. He may have calculated that African-Americans would vote for him anyway, and he could expand his vote among whites by opposing busing. If so, he calculated accurately. “No issue has consumed more of my time and energy," he declared in 1981. “We want to stop court-ordered busing.”

It helped make him the permanent Senator from Delaware. Such racially-charged strategies dominated Democratic politics for decades, leading also to the bipartisan "welfare reform" policies of the 1990s, for example, which threw people off the rolls but also took out of play one of the main issues on which the Republicans had attacked Democrats.

Perhaps the outcome of Saturday's South Carolina primary shows that Biden can still get 90 percent of the black vote here and there, which strikes me as hard to believe. Liberals often accuse white rural voters of voting against their own interests when they vote for Republicans. African-Americans voting for a Clinton or Biden might face a similar critique, if anyone was foolhardy enough to express it.

By the time Michael Bloomberg became mayor of New York, as he switched parties and alternately absorbed or competed with the Giuliani machine, the rhetoric had shifted. But the basic strategy remained the same. Giuliani had run New York through a string of law enforcement fads, all of them designed to police minorities, particularly young men of color, ever-more extremely. These included "broken-windows policing," in which no crime was deemed to be too trivial for arrest, and "stop-and-frisk," in which young men of color were subject to random searches and brutal disrespect.

Bloomberg used the tried-and-true strategy of liberal racism to win three terms as mayor: he showed that a "liberal" mayor could be just as "tough" as Giuliani. As he put it in a late-breaking and uncharacteristically frank expression: "We put all the cops in minority neighborhoods. Yes that's true. Why did we do it? Because that's where all the crime is. And the way you get the guns out of the kids' hands is to throw them against the wall and frisk them." (Meanwhile rates of drug use in black and white communities were close to identical, while arrests for drug crimes were disproportionate.)

In 2020, Democratic political strategy of the common-wisdom variety has shifted profoundly, and now the elderly Democratic politicians who came along in the era of liberal racism have some explaining to do. As our politics have polarized, the white middle has shrunk, reducing the Democrats' motivation to appeal to it. The idea now is not to make inroads into the "silent majority," but to turn out the minority base. You can't win most of the Democratic primaries, much less the general election, if you can’t turn out "black and brown voters." Thus Biden and Bloomberg have been busy with quasi-apologies and bristling defensiveness. They keep pointing out that "it was a different time."

White liberals are chameleons on race, even as they spend a good portion of their energy congratulating themselves for not having “a racist bone” in their bodies. Black voters essentially had no leverage over figures like the Clintons, Biden, and Bloomberg because they were political captives. But now the difference between a 60 percent and a 50 percent minority turnout might change the result. And if this leads the politicians to take minority communities more seriously, and take practical steps that do reduce police violence and mass incarceration (among other disastrous outcomes of their previous positions), the polarization will have had a good effect.

But I’d also look skeptically at the change of heart. Demonstrably, people like Biden and Bloomberg would take any approach to race in America that they think will help them get elected.