For libertarians, it has never been a Super Tuesday. 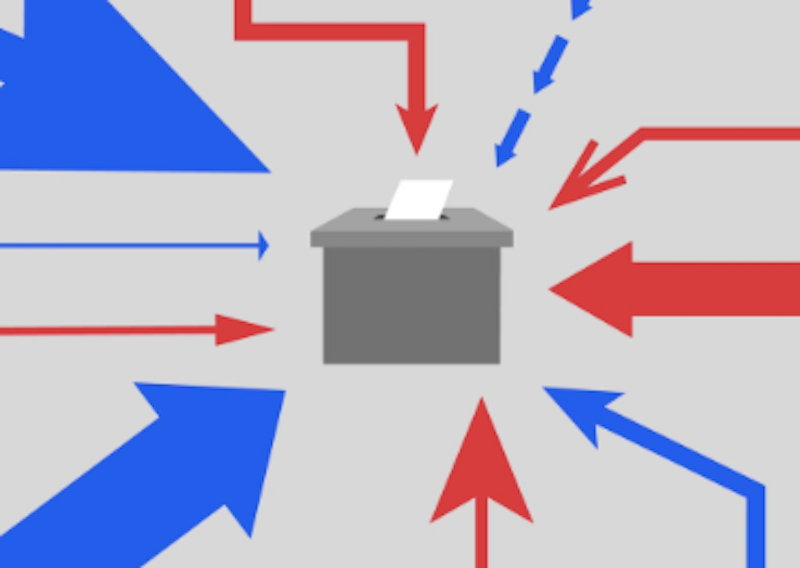 Ten years ago, conservative Ramesh Ponnuru humiliated libertarian David Boaz, who was then trying to draw attention to how big the neglected libertarian vote is in America. Ponnuru pointed out that while there might be more libertarians than you’d expect—and while he sympathizes with them on many issues—they often seem to be a reverse-indicator of where the American electorate is headed.

If there’s a candidate truly eager to end most government programs, shrink the military, and tackle the federal debt, the odds are he dropped out of whatever political race is going on at the moment way back when the primary season was just starting. The eventual winner will likely be promising more “free stuff” (via government spending or regulatory actions) of one kind or another, and above all promising not to tinker too much with any of the existing free stuff.

So, as I write this on Super Tuesday, without too much stake in how the Democrats vote, it wouldn’t be such a dumb predictive model to bet that the results will yield the candidates I hate most coming out on top and the ones I come closest to being able to tolerate shocking the world with their poor showings. That’s how it usually goes.

Before I name and rank those five Democrats, I should add that Trump obviously has the Republican nomination sewn up—and add that I haven’t got the slightest idea who the Libertarian Party nominee will be and usually don’t, since the Party (as opposed to the broader, lower-case libertarian movement) is so small it produces relatively little in the way of reporting, statistical samples for predictions, or personality cults big enough to make cultural waves in advance of the tiny-but-decisive national convention. You pretty much have to attend, ideally as a delegate, to have any idea what they’ll end up doing (in May in Austin, TX this time around).

The last time I checked, I think Jacob Hornberger sounded like the least-bizarre full-fledged libertarian (as opposed to mushy fellow-traveler) seeking the nomination, but we can revisit that competition in May, if you care.

So, despite Biden having a resurgence in the polls, the bet-against-libertarians model would tend to say the smart money going into Super Tuesday was on a Sanders triumph, since he’s obviously the most explicitly and sweepingly anti-free-market, socialist, communist-regime-friendly candidate the Democrats have to offer. If he actually ends up president, I’ll have to console myself, not for the first time, with the comedy value of it all and hope he’ll be passionate/crazy enough on one or two issues that the centrists normally bungle to get some sort of good results, like ending federal restrictions on pot or something.

Biden is the living embodiment of the aforementioned bungling centrists and old and batty enough that there’s very little chance of him wising up at this late stage and fixing any of the problems of an overweening federal government $23 trillion in debt, not even on the military side since he’s a proud interventionist. Under Biden: no surprises, no improvements. Perhaps I should regard him, an avatar of mindless stasis, as in some sense worse than Sanders by libertarian standards, in which case, by the time you read this, he may have eked out a Super Tuesday victory after all.

Elizabeth Warren is a creepy stealth-demagogue in my view—not the mainstream one, I know—and she has shown herself willing to ask virtual economic nonsense-questions in Senate hearings for the sake of getting some cheers from supporters. She also displays Tourette’s-like bursts of surprisingly autocratic thinking, including her talk of using executive orders to do things like erase student debt. But she seems smarter than Biden and capable of thinking about economic trade-offs, which might make her slightly less dangerous than Biden.

It’s not that I think Biden is a stealth-communist. His track record is long. But he, like his pal Obama, is so thoroughly a creature of politics that I don’t believe economic consequences weigh in his mind a tenth as much as party-political calculations about where the votes are, how to look like a big shot in clashes with Congress, etc. Warren might actually alter some budget numbers in an intelligent way. I’ll reluctantly call her arguably only the third-worst outcome by libertarian standards, meaning she probably will have had only a middling performance on Super Tuesday.

According to my pessimistic model, Bloomberg should be having a surprisingly bad day as I type this, since one could argue he’s the second-best, maybe even the best, option in the Democratic race by libertarian standards. Don’t get me wrong—that’s a reminder how awful the Democrats are. Bloomberg’s still an arrogant nanny-state gun-banner, carbon-dioxide-hater, and unhealthy-diets-restricter. He’s barely more deserving of power than the three fiends I’ve already listed. However, to an even greater degree than Warren, he understands markets and is probably the candidate most likely to tackle the federal debt, arguably the most important political issue facing America. We’d end up surveilled and finger-wagged in ways I shudder to contemplate, but we might see the stock market continue to rise, and that’s half the battle in this material world that needs more wealth and less poverty.

Finally, like many libertarians and conservatives, I have a soft spot for Tulsi Gabbard—about half the age and 20 times the surfing skills of the other candidates—who would likely be just as bad a welfare-statist as any of the others but seems to have strong enough antiwar convictions to offer the highest odds of shrinking that part of the government and shows enough independence of mind and tolerance of dissenting voices to perhaps prove educable or at least establishment-bucking on econ matters. If nothing else, she demolished establishment darling Kamala Harris earlier in the race, so we have that to thank her for. I assume she’s getting about one percent of the vote as I type this.

Again, none of them is even close to acceptable or worthy of my vote, all of them defined mainly by the checklist of things they want to add to an already enormous government’s duties, with that asterisk for Gabbard’s admirable antiwar tendencies. But my preference, were I forced to vote in the Dem primary at this point, from best to worst, would be roughly: Gabbard, Bloomberg, Warren, Biden, Sanders. Thus, the stupid public, which does the actual voting in this obscene, topsy-turvy system, will probably have picked, from most votes to least, something like the exact opposite: Sanders, Biden, Warren, Bloomberg, Gabbard. It makes you wonder why I bother trying.

On a brighter note, each of those five would, in his/her own way, make an amusing Trump foil: respectively (using the likely voter picks), a socialist (instead of right-leaning) populist, a doddering old establishment guy, “Fauxcahontas,” a rival New York billionaire (who even shares Trump’s weird habit of talking about how sexually attractive his own daughter is, though that may just be how the elite roll), and someone to rival Trump’s antiwar/Russia-friendly tendencies. Comedy-wise, we can’t lose, and they’re all winners.