Who Will Build the Road to Serfdom?

Our political Mobius strip is the border of Weimar. 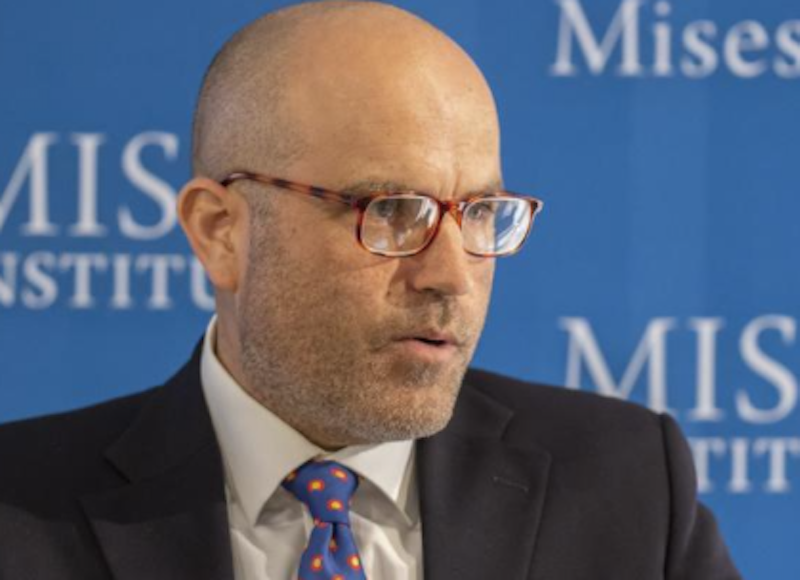 It’s frustrating, if you were alive during part of the 20th century, to see humanity circle back around to the century-old argument between socialism and fascism, both stupid philosophies seemingly discredited by the most memorable, horrible experiences of that century but in its first few decades passionately defended by street-fighting gangs of young ideologues on German streets.

How did this recurrence happen? It’s like we’re walking a philosophical Mobius strip—or worse, since we barely seem to be moving, sitting in a Mobius chair somewhere beyond time and space, surveying 100 years of pointless crisis and conflict yielding no real learning.

One thing I’ve learned, though, is that if you give government an inch, it’ll take a mile, sometimes a mile of paved road. As I’ve lamented before, ironically, both the left and elements of the far right (including some purporting to be my fellow anarcho-capitalist libertarians) point to the expense of road maintenance as justification for government taking on other duties.

“Who will build the roads?” ask the leftists—as if the private sector doesn’t get that task done with great frequency—while some who (inaccurately, I think) call themselves anarcho-capitalists ask, “Shouldn’t we be able to stop people at the border if the alternative is them using roads at the expense of innocent taxpayers?”—as if there’s no way to get people to pay for roads (hint: tolls) besides deploying fascistic border patrols with the legal authority to harass everyone within 100 miles of the border in numerous ways that (obviously) go far beyond defraying road-maintenance expenses.

Given the obvious and very long history of government’s “mission creep” whenever it can find an excuse to act, whether by adding a welfare agency or a police function, the last thing we should do is come up with more rationales for its existence, especially those of us claiming to be libertarians of some sort.

I was thus alarmed to see an editor at the Mises Institute, Ryan McMaken, taking the borders-are-libertarian argument one perverse step farther, arguing that what‘s good for the U.S. taxpayer (mainly because it excludes untaxed Mexicans from roads, in theory) is in fact good for the taxpayers of every individual U.S. state, so why not have 50 enforceable borders?

If Brexit makes England freer than EU membership does, and over time there’s reason to believe individual European countries are likely less prone to impose crazy regulations than would be a Brussels super-state, goes the argument, you can hardly tell New Jersey it has no right to enforce its border against possibly untaxed interlopers from Pennsylvania or New York. A single small state such as Jersey might even be less intrusive and wide-ranging in its entry requirements than the enforcers at a big national border tend to be. And if not, you can always go around it more easily than you can the country as a whole. So, a newly-hardened New Jersey border could be the key to fostering freedom!

But everything we know about the history of government means we must at least consider the obvious ways this plan might go wrong, and an honest reminder how ugly and burdensome enforcement is at the national border is a good place to start. They don’t just check for violent criminals and invading armies there, after all—which in principle, I think virtually everyone would consider reasonable, absent the complete dissolution of nations—but instead use the national border as both an excuse and an opportunity to mold trade, population demographics, drug use patterns, internal employment trends, and more.

Nowadays, given the right’s near-total obsession with immigration, one must assure them that one is not dismissing any of the things in that list as unimportant—but one is, if libertarian, insisting that the important things are the last things one should want controlled by government. You insist on a border? Keep it simple, mostly-porous, and limited in its functions, more or less like government itself, if we must have one at all (for now).

By contrast, I suppose the border-lovers should look with a certain amount of admiration at the (understandably) more-policed-than-average city boundaries of New York. It’s almost like paying to enter Disney World driving into this place, and rest assured you’re constantly being surveilled in the process—music to the border-enforcers’ ears, I suppose. But consider the possibility that it’s no coincidence this city spawned authoritarians such as (Brooklyn-born) Bernie Sanders and a man who recently endorsed him, his fellow communist Bill de Blasio.

Occasionally, circumstances will make a border or even a siege mentality a necessity, but it‘s hardly something to revel in. Given the tendency of the authoritarian elements of any political plan to come to fruition while the libertarian elements get perpetually delayed, I think it’s a safe bet 50 hardened state borders—if put in place before the welcome day the federal government ceases to exist, and especially if put in place by the federal government itself rather than, say, fiercely freedom-loving state-by-state secessionists—would just yield a still-vast nation at first annoyed and in time inured to constant checkpoints along one's slowed trek across what would still be the United States of America, with most of its federal regulations still intact.

(By contrast, long story short, a Brexited UK can fairly easily resume thinking of itself as and behaving like an independent country—some of these distinctions must be more a matter of contingent history than pure philosophical idealism.)

Constant government checkpoints can’t be what a reasonable-approximation-of-liberty (or private property) looks like, any more than a ring of government cops around every town or block is (and New York has come close to trying that, too, given all the barricades put up in the Bronx at certain hours). In theory, yes, that system might eventually fortuitously decay into mere parcels of private property—the ultimate win for libertarianism—but you know damn well it might more easily decay into a system in which you must constantly “present your papers” to go across town, one more layer of very palpable tyranny.

Most of that will sound rather far-off and speculative, but one crude, practical litmus test right now for separating the libertarians-in-spirit from the mere border-lovers/Trumpers-in-spirit is seeing how people react to the news of Greyhound announcing it will not comply with searches of its vehicles by immigration agents who do not have warrants. The same people aghast at the independent-mindedness of “sanctuary cities” will want Greyhound punished, I suppose, but since I still remember the days when non-leftists preferred capitalist enterprises and individual rights to latitude for government goons, I say: Go, Greyhound!