Notes from CPAC 2020, where (almost) everyone loved Trump and recognized Bernie Sanders as his greatest threat. 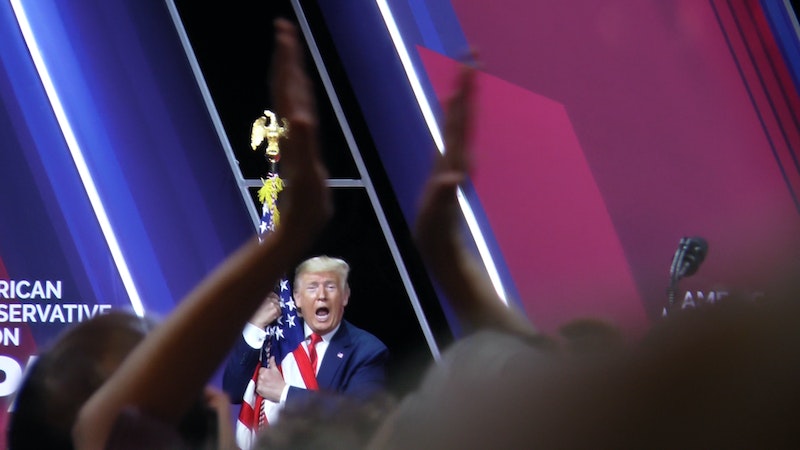 Before Donald Trump, CPAC wasn’t exciting. There was cultural red meat and plenty of fiscal conservatism, but it wasn't colorful. Of course people were kicked out and their credentials were revoked in the past, but not like now. When I covered CPAC this past weekend as a member of the media, I saw outright conservative outlets kicked out by shouting mobs and their own overzealous and ineffectual protests. (Among the citizens 86’d from CPAC: a man screaming “THEY ARE DISARMING OUR VETERANS!”, a Trump impersonator, Gavin McInnes, Richard Spencer, and now Mitt Romney).

I didn’t attend the whole convention, or catch many speakers of note beyond Ivanka Trump, Nigel Farage, Larry Kudlow, James O’Keefe, and the President himself. Scott Walker was chilling on Broadcast Row along with Rick Harrison of Pawn Stars. InfoWars were reporting as attendees--not even they can get media credentials to CPAC. I went there primarily to make a documentary, which will be out in about a month here on Splice Today. I wanted to talk to conservatives young and old about their thoughts on the chaos in the Democratic primary, who Trump would have the hardest time beating, and what they like most about Trump.

Most said that Bernie Sanders would be the hardest Democrat to beat. They were optimistic about Trump’s chances, if not bullish. It was halfway between a Trump rally and whatever CPAC used to be—there probably weren’t drag queens. I spoke to Lady Maga, a conservative drag queen who was essentially excommunicated by all of her friends and family. But here, Lady Maga was surrounded by like-minded people, united by Trump. Lady Maga said her greatest fear was what happens once Trump leaves office, even if he wins reelection. I asked everyone that question, and no one had an answer. Because who could replace Trump? Many said it’d be someone young we don’t even know about, or perhaps a black female Republican. “That would be my dream,” said Lady Maga.

Trump will be very hard to beat in November. No matter how bad the coronavirus gets (it’s become a common noun in four months), millions of people will vote for him. Everyone I talked to at CPAC said Sanders was the only one with “a movement” and when asked, they all said he would be Trump’s most formidable opponent. Despite the theme of “America vs. Capitalism,” there wasn’t much about Crazy Bernie in the President’s speech. The only thing he really hammered him on was saying that the Boston Bomber should be allowed to vote. “I should’ve saved that for September, oh well…” Trump said, destroying the room like Andrew Dice Clay or Rodney Dangerfield. “Now I can’t use that one on Crazy Bernie, he’ll find a way to back it up, that’s okay, that’s okay…” Trump sounded like Bob Dylan, trailing off in volume at the end of every sentence.

He had fun roasting the rest of the candidates, dismissing Amy Klobuchar and Pete Buttigieg (“Boot Edge Edge”) early on—I heard one lone person near the back shout “Do Steyer!” to no avail—and reveling in the spectacle of Elizabeth Warren against Michael Bloomberg at both recent debates. He, like most people, flipped in between a mild to severe dislike of Warren that’s constant and a new, refreshing burst of joy in her dancing on the shoulders of a man too short to reach the podium (it was slanted).

The final 45 minutes of his speech was all red meat, everything the people I interviewed didn’t talk about: abortion, undocumented workers murdering Americans, radical socialist communism. (One Mississippi congressman I spoke to said, “Bernie Sanders isn’t just socialism, he is communism.”) I didn’t press anyone that hard, I’m not interested in making “gotcha!” documentaries or coverage. But the energy in the room when Trump spoke was a world away from the atmosphere of the convention itself. It was charged and volatile, and holding a camera, I was automatically suspect.