Biden and Harris Are No Friend of Labor

The Biden administration may bring an end to right to work laws. 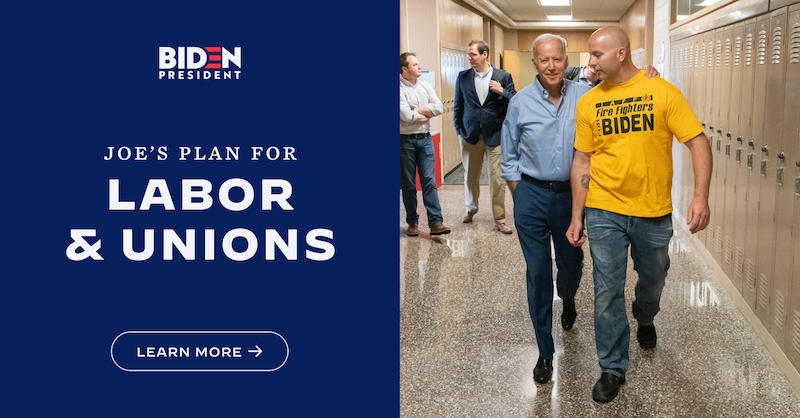 “As president, Biden will repeal the Taft-Hartley provisions that allow states to impose ‘right to work’ laws,” says an outline of the Biden agenda on JoeBiden.com. “These laws exist only to deprive unions of the financial support they need to fight for higher wages and benefits.”

In 2019, then-presidential candidate Kamala Harris told a Las Vegas crowd that she wanted to use the presidential “bully pulpit” to speak up about the need for workers to be able to organize and fight for their rights. “Let’s be more specific, it has to be about, for example, banning right to work laws,” said Harris to a cheering audience. “That needs to happen.”

Cue Mayor Marty Walsh (D-Boston), Biden’s nominee for Secretary of Labor. The resume of the former union official turned state legislator and mayor provides an idea of what is coming down the road. Mark Mix of National Right to Work Committee agrees. “Marty Walsh whispering in the ear of President Biden while continuing to push Big Labor’s agenda of forced unionism could be a great encourager to Biden to go after right to work laws,” Mix told me.

AFL-CIO president Richard Trumka believes Walsh will have the ear of not only Joe Biden, but the Cabinet and Congress. “Boston Mayor Marty Walsh will be an exceptional Labor secretary,” said Trumka in a statement published on TheHill.com.

If this has you worried, you’re not alone. “I’m always worried about the future of right to work laws, but I’m particularly worried now,” Mix told me. To date, 27 states have right to work laws, some of them former union strongholds in Michigan, Wisconsin, and West Virginia.

The real purpose of right to work laws is to tilt the balance toward big corporations and further rig the system at the expense of working families. These laws make it harder for working people to form unions and collectively bargain for better wages, benefits and working conditions.

Are those the same laws that Biden says “deprive unions of the financial support they need” to supposedly fight for higher wages and benefits of workers? That certainly appears to be the case.

Unions aren’t receiving dues and fees from all workers at an organized operation in a right to work state. As a result, they claim it’s unfair to not be compensated for the wages and benefits they secured for all of those employees. I get that, but if we’re going to discuss whether that’s unfair, we must also consider whether it’s fair to force someone to pay dues or fees as a condition of employment, especially at a place where that employee did not vote on organizing.