Are Andrew Sullivan, David Brooks, and Their Like Even Adults?

American culture considers the ludicrous Sullivan and Brooks to be significant intellects. 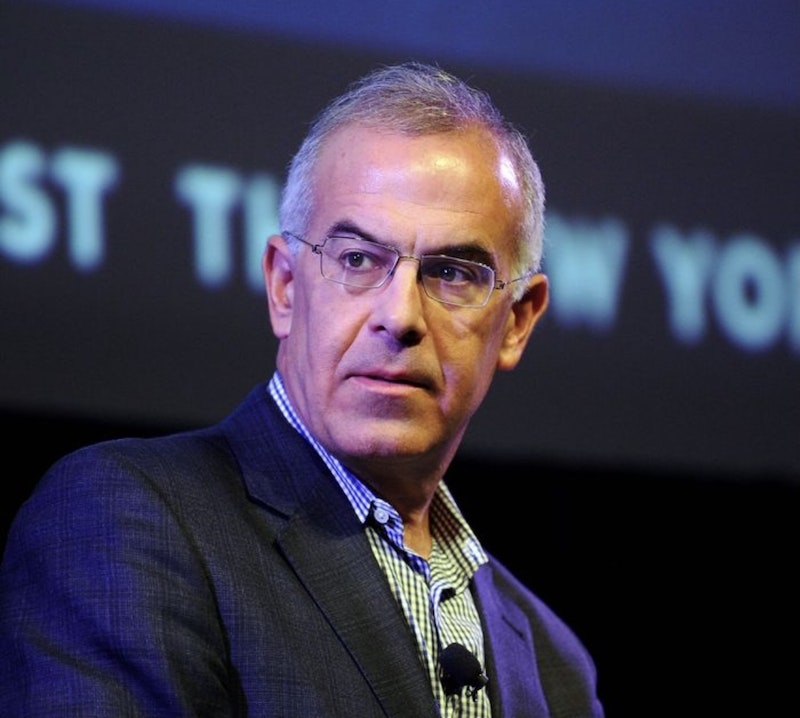 These sorts of Inauguration Day utterances fascinate me: 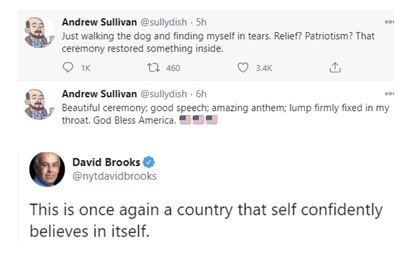 What kinds of callow half-wits write such things? Think such things? Feel such things? Any functioning adult will associate sentiments like those above with children. They belong to the same realm of narcissistic pre-adolescent fantasy as a belief in the Tooth Fairy.

And yet our culture considers Sullivan and Brooks to be significant intellects. Brooks even seems to have real-world political influence—he can influence our stupid “national conversation” in a way that can affect the choices of idiot policymakers.

I don’t know what to say about this, honestly. I suppose I just wanted to remark on it, since it’s remarkable. I’m “putting it out there.” As Russia’s admirably honest and non-ideological news television programs do when they run a voiceover-free video clip of an interesting event, I present it bez komentarii—without commentary.

(The ability to “stream” excellent, scrupulously objective Russian news television, by the way, is one of the few good things about online culture.)

Midwinter brings its usual blues. The magic of the Feast of the Nativity and its attendant celebrations, such as the Feast of the Baptism of Christ that is so important to us Russian Orthodox, has dissipated. Now nothing remains but the shank of winter, which is bleak here in Indiana.

Reading about the life of Prince Golitsyn, a distant cousin of Tsar Nikolai II who managed to combine strict Orthodox piety with a certain libertarian streak, I’ve been wondering what might finally compel me to do as the randy Prince did and “take a lover.” The goal would be to enjoy sensual blandishments of the sort that I no longer receive within the bounds of my long marriage. It seems to me that, as a mature man of some attainments and worldly wisdom, I might find it easy to “play the field’ among the young women who populate the local trailer parks and punch the cash registers at the regional box stores.

This would raise my spirits enormously. The downsides are obvious, starting with the enormity of the sin I would summon upon my head. Adultery is no small matter. And yet, as the example of Prince Golitsyn shows, there have been men who've managed to square the circle between the desires of the flesh and the imperatives of the Word. Who am I to assume that they have not found their redemption in heaven?

Meanwhile, I liked Anne Applebaum’s Inauguration Day contribution to the National Conversation, an article in The Atlantic entitled “Coexistence Is the Only Option.” In it, she calls for “figur[ing] out how to live alongside them”—“they” being the Trump-leaning working class.

Big of her. But those of us familiar with Applebaum know that she’s a fan of Ukrainians, Belarusians, Georgians and other bloodthirsty subalterns who can be expected to take to the streets in genocidal anti-Russian iconoclastic frenzies whenever a Nuland, or a Soros, or a Frum, or for that matter an Applebaum motivates them to do so through an alchemy of open propaganda, financial subvention, subtle media manipulation and other unclean methods.

The truth is that I’d love to hear from this crafty sorceress about her criteria. A middle-American rabble profaning the sanctity of the Capitol Building offends her. But what makes that rabble worse than her beloved Little Russian rabble, which, during 2014’s so-called Maidan Revolution, sacked and looted the residence of the legally elected President Yanukovych precedent to running the SS Death’s Head banner up the flagpole of their country’s parliament building?

What makes that Trump mob worse than the Minsk rabble that first gang-raped, then lynched, then disemboweled, then doused in kerosene, then set on fire, then gang-raped once again a six-year-old girl—an angel-faced Russian citizen named, charmingly, Ksyusha, who was visiting her Minsk grandmother from her home in Moscow—during Belarus’ psychopathic recent anti-Lukashenka riots?

Or worse than the Georgian rabble that in 2008, armed with military-grade weaponry supplied by their puppet-masters in the Mossad, launched cross-border sorties against Russian civilian targets, setting off the Russian military’s subsequent peacekeeping incursions toward Tbilisi?

Well? We fans of Applebaum might wish that she’d publish her methods. Maybe she can post a quick smartphone photograph of the sophisticated matrix that she uses to distinguish between various rabbles, and particularly between U.S. rabbles on the one hand and what the immortal Chesterton trenchantly called “the barbaric undifferentiated bohunk rabbles” on the other.