“We, we are the sort of people who sort of believe our own hooey.” 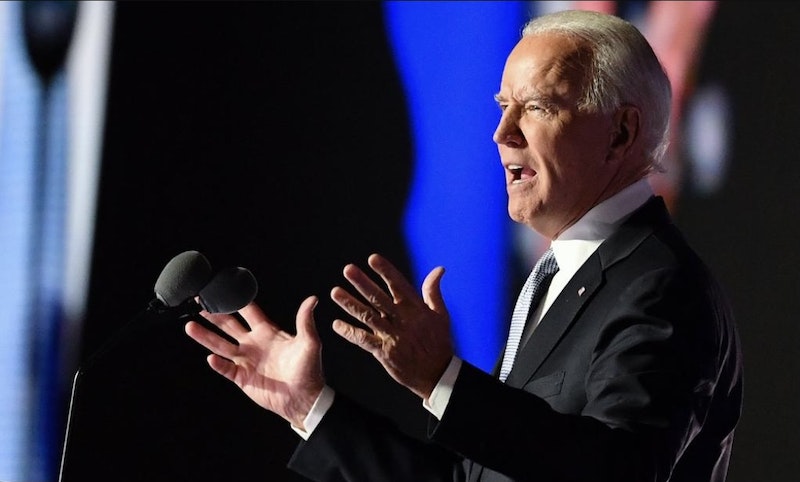 As I look out through bulletproof glass across this sacred American scene of fences and razor wire, I know, or at any rate infer, that under your helmets and visors, your eyes are shining with a deeply American inspiration. That inspiration is inspiring, number one and number two deeply American, but what I really appreciate today are your weapons, which are here to enforce the true meaning of our creed. I'd like to thank General Milley and the joint chiefs for the predator drones and other air cover. [Applause.] This deeply American ritual of the peaceful transfer of power would be deeply impossible without air cover.

Each time we gather to inaugurate a President, we bear witness to the enduring strength of our Constitution. We affirm the promise of our democracy. We resolve, as George Washington resolved, as John F. Kennedy resolved, as Chester A. Arthur resolved, to get some sort of handle on social media. Unlikely? Extremely. Useless? Absolutely. But we are Americans. We are dreamers and we are doers. We, we are the sort of people who sort of believe our own hooey. I make a plea today to my fellow Americans, as Lincoln did at Gettysburg, as Washington did at Valley Forge: stop fucking posting that crap, you fucking assholes. [Applause.]

Our no-Facebook dream is a dream firmly rooted in the American dream, the dream of Martin Luther King, of Fannie Lou Hamer, of Cesar Chavez, of Millard Fillmore. As they taught us, we must live out the true meaning of our creed. Now, we completely disagree about what that is, for we are Americans. But we have always understood that when times change, so must we; that fidelity to our founding principles, whatever they may have been, requires new responses to new challenges; that preserving our individual freedoms ultimately requires collective action; and that collective action demands much more effective surveillance of you, my fellow American citizens.

The message I bring with me today from Delaware is one of healing. If American history teaches us anything, in all seriousness, it is that our healing begins with putting down the insurrection, a few random shootings of demonstrators, and mass arrests. [Applause.] We will find you and we will prosecute you to the fullest extent of the law. [Applause.] Once the American people see that resistance is futile, we can begin to recover from our partisan rancor. As Barack Obama said: "There is not a red America and a blue America, but only a camo America." And Barack Obama was a pretty good president. All of you look to be the same color from my vantage point up here above you.

But today I'd like to go even further and say there is not one America, but many. There is an African-America, an Asian-America, an as-it-were Latin America (hola, my homies!), a mildly gay America, a gay America, and an extremely gay America. That's why I appointed one of each. My cabinet looks like America, or at least like America looked before everyone put on helmets and coveralls. How powerful is it for a child to see an HHS secretary that looks like them, or would look like them if all you saw was race? I have no idea, really. No one does. [Applause.] And once again, I urge parents from minority groups to turn on the record player and expose their kids to words. Maybe that's where I went wrong with Hunter.

Members of the armed forces, I have one question for you today: how many of you are Trump supporters? Let's see a show of hands. General, could you disarm those people immediately?[Brief firefight ensues, and medical evacuation; eventually, Biden emerges from the Secret Service dogpile and resumes.]

Mass incarceration, I want to emphasize, was really not my fault. Green jobs of tomorrow, blah blah blah. Education. Science. Etc. Who's with me? Wait, don't answer that.

We have come through a dark period of our history indeed. But, incomprehensibly, I've never been more optimistic. As my dad, who was a blue-collar, hard-working 19th-century American from Scranton Pennsylvania, used to tell me: "Little Joey, as things spiral downwards, as they inevitably must, optimism still sells. And when you sell optimism, you sell you." [Applause.] Then he added, "Believe Science, little Joey."

This generation of Americans, like those that went before, has been tested by crises that collapsed our resolve and crumbled our resilience. But things are looking up. Call me an optimist or dismiss me as psychotic if you like, but I firmly believe, in the face of all the evidence, that America's best days are ahead. Our national struggle with Covid is coming to an end, unless the microbe keeps mutating. The terrible economic slump caused by not doing what China tells us to do ends today. America’s possibilities are limitless, for we possess all the qualities that this world of rising walls demands: credulity, hostility, and, above all, weaponry.

My fellow Americans, we are made for this moment, and we will seize it—so long as we seize it together. [Cheers and applause, gunfire and explosions.] Wait I didn't mean "seize it" literally. Hey Pence, which side you on? Back the fuck off! And God bless our troops. [Exit, pursued by a shaman.]