The Focus-Grouped Speeches of Biden and Harris 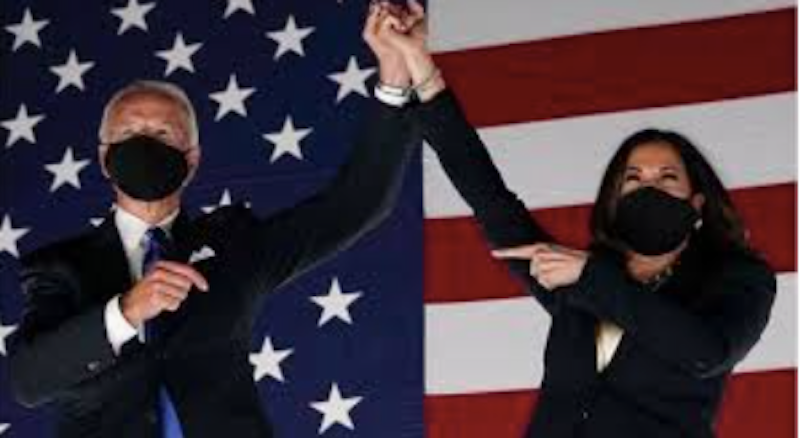 America—part of it, at least—was apparently inspired and even redeemed by Joe Biden's inaugural address, while little girls everywhere gazed upon the countenance of Kamala Harris and came to believe that they too could someday command the greatest, most destructive military the world has ever known. (Almost all of them will be disappointed, but what the heck; it's cute right now.) As "America's" "heart" soared, however, I pondered another question: Why isn't the writing better? Presumably these people could hire almost anyone in the world to put words onto their prompters and into their mouths.

What Biden and Harris did on inauguration day was lurch right back to a pre-Trump rhetorical style that might be characterized as a re-hash of focus-grouped catch-phrases, quasi-inspiring generalities of skull-crushing banality, fragmentary semi-quotes from Martin Luther King and Barack Obama, and the words "Abraham Lincoln." They can't possibly feel the inspiration with which they try to get their voices to rise, because they're not actually saying anything, and they're not-saying it in other people's words. Biden and Harris aren’t distinguishable even from one another by the way they speak, except when they again whip out the particular names of family members that supposedly taught them important lessons. They're not distinguishable from Bill Clinton in 1995, for that matter, though I appreciate the fact that neither Biden nor Harris have said (lately) that no child must be left behind.

"It is my honor to be here, to stand on the shoulders of those who came before," Harris intoned as she began her first speech as vice president, mechanically instantiating the formulae without providing any content whatsoever. Then she told us once again, in the face of all the evidence, who we are as Americans. "We not only dream, we do. We not only see what has been, we see what can be. We shoot for the moon and then we plant our flag on it. We are bold, fearless, and ambitious. We are undaunted in our belief that we shall overcome, that we will rise up."

Every phrase is derivative, though it conspicuously lacks the rhythm or moments of felicitous surprise of its sources in people like King. It's typical of our debased political language in that it formulates a hope as a factual assertion about "who we are as Americans." (Who we really are as Americans was the gigantically jive-ass theme of the inaugural, insofar as it had one.) Kamala's speech is typical in that it panders to the voters. It's typical in that it’s baldly false. And it's typical in that, really, its truth or falsity is not in question: it washes over us as a pure syntax; as uttered on that occasion, it has no semantics: it doesn’t refer to anything in the world. It's just a flow of sound. But it's undistinguished, indistinguishable sound, a sort of anti-poetry. It's not written at all, by anyone; it's just sort of assembled by a committee.

Here are some snatches of Biden's inaugural: "We look ahead in our uniquely American way—restless, bold, optimistic—and set our sights on the nation we know we can be and we must be… Over the centuries through storm and strife, in peace and in war, we have come so far. But we still have far to go…With unity we can do great things. Important things…Through the Civil War, the Great Depression, World War, 9/11, through struggle, sacrifice, and setbacks, our ‘better angels’ have always prevailed…  This is our historic moment of crisis and challenge, and unity is the path forward. And, we must meet this moment as the United States of America. If we do that, I guarantee you, we will not fail. We have never, ever, ever failed in America when we have acted together… I get it."

The phrase "better angels of our nature" is nonsense. And that, here, in America, it's bad to be emboldened but good to be bold. "We Americans, we are bold, bold, always bold. That's who we are as Americans." I ask you, is this any way to write anything? Now, Biden's staff, unlike Harris' did try to drive some pale music into his words; they just didn't do it particularly well.

I think, on reflection, and "in this difficult moment" etc., people find the return to the collage of hyper-repetitive banalities comforting, like elevator music after a heavy metal gig. I can understand that. But I also think that the rhetorical mediocrity, the bland ecstasy of normality, leaves these extremely normal politicians vulnerable. It makes them easy to ridicule.

When Donald Trump took out Marco Rubio and Jeb Bush, he did it by destroying them as rhetoricians. That's one thing that he meant by characterizing Bush as "low energy," for example: the rhetoric was tired and basically content-free. When Rubio launched various attacks, Trump's response was "Your staff told you to say that," portraying Rubio as a sort of sock puppet who wasn't speaking his own words. One of the reasons Trump won, and one of the reasons Trump still has such a loyal following, is that he smashed the conventions of American political bullshit, spoke as himself, spoke freely and unpredictably.

This is one of the reasons that I regret that Trump was such a pitiful president and such a bad person. We're now in a backlash against everything Trump, which is understandable. But we're in for another decade of who we are as Americans and bold, bold plans. I'm already bored stiff, the only thing worse than being continually outraged.

Here’s an offer to the incoming administration. Even if you're going with the fragment-of-King, empty transitional phrase, paraphrase-of-Obama approach, I can assemble a better bricolage. I'll need to see the cheese, though.