Alabama and Mississippi put the fear of the God-fearing in the Republican establishment. 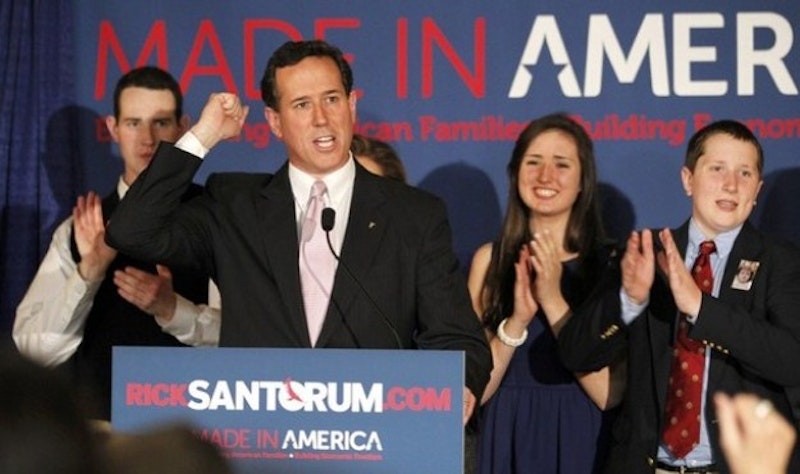 Mitt Romney said he would win Alabama. He didn’t. He came in third in both of Tuesday’s primaries, Alabama and Mississippi. We’re talking small numbers here—just 1695 votes kept him from nipping Newt Gingrich for second place in Mississippi—but getting beat at nickels and dimes can't be good for the morale. Of course, Newt's campaign spokesman said last week that Gingrich had to win both states to remain a candidate. He isn’t saying it this week. “Whoever said that should be flogged,” the fellow remarked playfully as his candidate wound up a few crucial percentage points away from where he was supposed to be. (For the record, the fellow's name is R.C. Hammond, and we don't know if he made his “flogged” remark with finger held coyly to the lips and eyelashes fluttering.)

The night's double winner, the victor in the pair of Deep South primaries, was of course Rick Santorum. He took 35 percent in Alabama and 33 percent in Mississippi, enough to put the fear of the God-fearing in the Republican establishment. CNN's exit polls found that in both states the fervent, fist-clenching Catholic won 35 percent of the Evangelical and Born Again vote, more than any of the other candidates. You'll notice that the 35 percent figure matches Santorum's overall share in Alabama and is just a couple points higher than his share in Mississippi. That's because 75 percent or more of the voters in the two primaries identified themselves as Evangelical or Born Again. These voters make up the Republican majority in the South, and the South is what gives the Republicans a shot at having a majority nationwide.

Mitt Romney, still the man most likely to be nominated, just lost those voters to two Catholics. In Mississippi he also lost among voters making between $100,000 and $200,000 a year, and in Alabama he tied for that group with Santorum. Rich people are supposed to like Romney. Apparently that's not the case in the states the Republicans need to be in the game. He didn't even win among the voters who said they were Republicans. In recent primaries they had been slowly trickling his way, presumably because at some point the frontrunner must be treated as such. Not this time around: Santorum won them too.

So how much did Romney spend to come in third in two states that are crucial to the Republican coalition? A “source” tells Buzzfeed that the Romney forces' combined spending in the two primaries came to $2,523,065, for a per vote figure of $9.38. That's against $3.33 for the Newt forces and $2.58 for those of the night's winner, Santorum.

Going forward: Romney needs to win about half of all the remaining delegates if he wants to be nominated on the first ballot. Can he? Well, he's won a bit more than half of the delegates so far, and party super delegates can be expected to get on his side. Many are still hanging loose (this year the party establishment has been less forthcoming than usual when it comes to endorsing the supposed favorite), but they'll sign up so somebody can win without a colossal mess at the convention. Santorum's own team doesn't think he can win on the first ballot, to judge by a recent campaign memo that got leaked. Newt’s team may think whatever; it doesn’t matter.

Romney’s people point out that he's almost past the Deep South phase of the primary campaign, which means there will be fewer evangelicals and Birthers to snub the self-proclaimed Mormon and suspected non-lunatic. Both his rivals have had trouble pulling together delegate slates for a number of upcoming contests, and Romney and his friends still have money to spend. So he could scrape by, but the emphasis is on “scrape.” It's nice if the nominee beats his rivals in votes instead of the other way around.

Of course, there must be a limit to Democrats’ gloating. This is not a good year for being popular, and that goes for the president. When 47 percent is considered a strong number for the man in the White House, you know nobody much wants to vote for anyone.