Martin O'Malley's ascension in national politics could end in a run at the presidency in 2016. 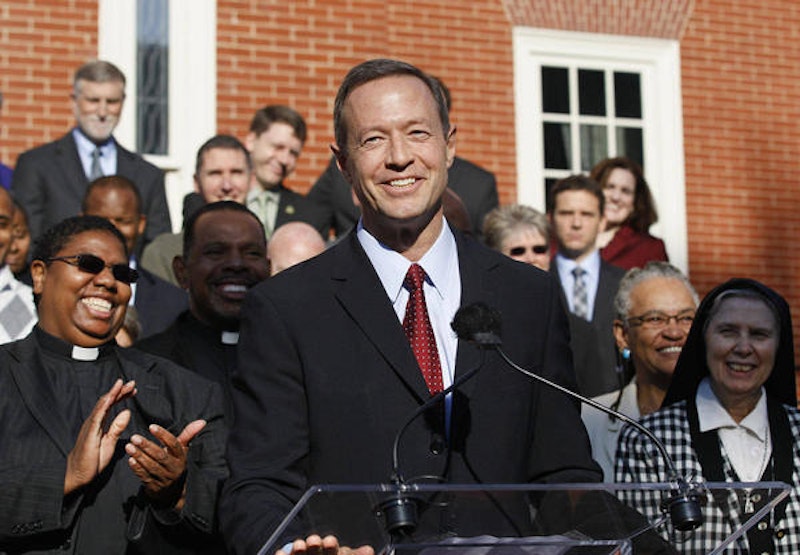 A week or so ago on MSNBC, Robert Shrum, Democratic political consultant turned university professor, was pontificating about the 2012 Republican presidential election being the perfect set-up for Democrats in 2016. “Whether it’s Clinton, O’Malley or Biden it’s all the same,” Shrum said.

A night or two later, the O’Malley in Shrum’s trilogy of megawatt Democrats, Gov. Martin O’Malley of Maryland, was on the same network’s Rachel Maddow show enjoying the afterglow of victory for signing the state’s newly-encoded same-sex marriage legislation into law. Then on Sunday, O’Malley, as chairman of the Democratic Governors’ Association, appeared on Meet the Press sparring ever so gently with Gov. Robert McDonnell of Virginia, his counterpart as chairman of the Republican Governors’ Association. This was the latest of O’Malley’s frequent appearances on Sunday morning TV talk shows where his visage and his voice are becoming familiar sights and sounds.

And just the other day, Ruth Marcus, in her March 14 Op Ed column in The Washington Post, was, like Shrum, leapfrogging over 2012 for a glimpse at how 2016 is shaping up. Marcus wrote: “But even if Biden chose to run—at 73, he would be the oldest person ever elected president—he would surely face significant competition for the nomination, if not from Hillary Clinton, then from the next generation of Democrats, figures such as New York Gov. Andrew Cuomo, Maryland Gov. Martin O’Malley and Sen. Mark Warner (VA.).”

Attention must be paid. This is more than a case of one medium feeding another as the news delivery system has blurred into a 24-hour unicycle of similarity and repetition. By accident or design, more likely by design, O’Malley is now part of the national storyline for the Democratic presidential nomination in 2016, a year, coincidentally when the presidency will be vacant if President Obama is reelected in November. The difficulty with unseating an incumbent president—only one sitting Democratic president, Jimmy Carter, has been denied a second term in 120 years—is also a considered reason why front-ranked Republicans such as Jeb Bush and Mitch Daniels chose to sit out 2012 and possibly reserve their running shoes for 2016.

It should be noted here that Shrum knows something about national politics as well as the Maryland version of the blood sport. Shrum was the media consultant on eight presidential campaigns and never had a winning candidate. He was also the media consultant on Former Gov. Parris Glendening’s (D) 1998 reelection campaign and had a hand in drafting Glendening’s second inaugural address. Ditto Former Lt. Gov. Kathleen Kennedy Townsend’s (D) 2002 losing campaign, mainly out of friendship with her uncle, the late Sen. Edward M. Kennedy, for whom Shrum was a long-time speechwriter and political adviser.

Instant access means instant involvement. O’Malley is having a grand time as a cable television political toy as well as certified Democratic star. If nothing else, he is no doubt enjoying the attention as well as the ego lift. He is, in a way, the source of his own momentum by playing directly into the presidential talk and exhibiting no effort to deflect the speculation.

As the national spokesman for Democratic governors, O’Malley is a frequent guest, in part, because of his easy accessibility to the media’s Washington, DC, studios as well as a cameraman’s short drive to his State House office in Annapolis. Many members of the Washington press corps are O’Malley’s Maryland constituents. But it is the nightly bloviation of words from the likes of Shrum, Maddow and others and the occasional mentions by Washington writers (The Washington Post is the largest circulation newspaper in Maryland) that give his ascendancy in national politics legitimacy as well as cachet.

To be juxtaposed in the same sentence with Democratic demigods such as Sec. of State Hillary Rodham Clinton, herself a presidential contender in 2008, and Vice President Joe Biden, a once and perhaps future candidate for president, is heady stuff even for a veteran politician such as O’Malley. And unlike many others of his political rank, O’Malley can claim with a straight face to be a rock star. He has a band, guitar and muscle shirts to authenticate ownership of the title. O’Malley was also given an extended turn in the spotlight when he was elected to a rare second consecutive term as chairman of the DGA because of electoral difficulties of his intended successor, Gov. Beverly Purdue, of North Carolina.

In his role as DGA chairman, O’Malley has broadened his political reach across the nation. He has raised millions of dollars to help elect Democratic candidates for governor which, if he decides to run for president, can hopefully be converted into return favors. In the pathology of politics, there is nothing more valuable than having a pocket-full of chits to be cashed in, as needed. And getting regular mentions on TV and radio by folks who are supposed to know what they’re talking about is part of the steady build-up.

Gay marriage may be O’Malley’s signature issue for 2012. But cable TV viewers outside of Maryland might not know that O’Malley is having a difficult time this year with an overwhelmingly Democratic General Assembly that is challenging him on tax policy. How it plays in Dundalk or Potomac isn’t necessarily how it’s viewed in Peoria.

O’Malley is limited to two consecutive terms as governor. They end in January, 2015. O’Malley will either have two years out of mind and out of sight, or he’ll have two years to assemble the elements of a national campaign—Maryland multiplied by 49. In the past, O’Malley and his apparatchiks have proven to be skillful organizers and political operatives. (Coincidentally, O’Malley’s brother, Peter, his principal organizer, has departed his job at City Hall to join a major law firm as a government relations specialist—ahem!—which, if needed, would give him the mobility to maneuver politically for his brother, Martin.)

Obama has singled out O’Malley as a close ally even though the Maryland governor supported Hillary Clinton in the 2008 primary. And there’s no reason to believe that O’Malley will not deliver the pork chop for Obama in Maryland this year. As DGA chairman, O’Malley can certainly negotiate a featured speaker’s role at the Democratic National Convention in Charlotte, NC, this summer. But he risks a repeat of his rhetorical disaster at the Boston national convention in 2004 when he lost control of his sing-song-y voice in the massive hall. He is remembered and mocked to this day for his poor delivery of prime time prose.

No one, not even O’Malley, really knows how the deck will stack four years from now. So the trick for O’Malley, if he’s serious about a resume upgrade, is to keep the story flowing and the momentum building. The media loves a tease. There are those, of course, who scoff at the idea that a pismire state like Maryland, with a paltry 10 electoral votes, could send a native son to the White House. But, then, who would have believed that Obama would become the first president to be elected directly from the U.S. Senate since John F. Kennedy in 1960? The voters seem to prefer governors—Jimmy Carter, Ronald Reagan, Bill Clinton, George W. Bush. (Marylander Spiro T. Agnew might have made the list if he hadn’t gotten caught with his fingers in the tambourine.) If Shrum and Marcus have their sights and their smarts set right, maybe Martin O’Malley?